A missing Indonesian man has been found dead inside the body of a python, according to local police.

Akbar went missing on Sunday on the island of Sulawesi, after leaving to harvest palm oil.

In the search for the 25-year-old, police said that they found a huge snake they suspected had swallowed the man.

The reticulated python, reported to be 7m-long, was cut open and the man's body was found. 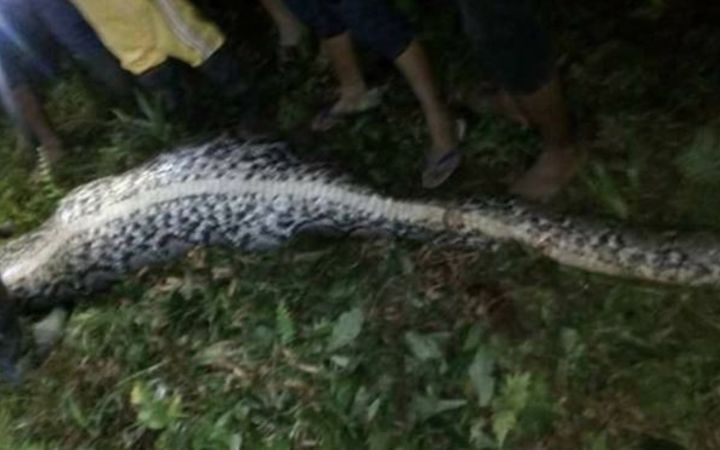 Searchers found this snake as they looked for missing Akbar. They cut the python open and found Akbar's body inside. Photo: Supplied / West Sulawesi Police

Reticulated pythons are among the world's longest reptiles and suffocate their victims before swallowing them whole.

Pythons rarely kill and eat humans, although there are occasional reports of them swallowing young children or animals.

Mashura, a spokesperson for the police in West Sulawesi province told BBC Indonesian that villagers reported to police that Akbar had been missing for 24 hours.

Police then conducted a search and found the snake near the family's palm plantation.

"They didn't find him (Akbar), but the villagers saw an unmoving python in the ditch. They grew suspicious that maybe the snake had Akbar. When they cut it open, Akbar was inside the snake," Mashura, who like many Indonesians goes by one name, said.

Village secretary Salubiro Junaidi told The Jakarta Post: "People had heard cries from the palm grove the night before Akbar was found in the snake's stomach.

"When the snake was captured, the boots Akbar was wearing were clearly visible in the stomach of the snake.

Nia Kurniawan, from Brawijaya University, told BBC Indonesian that a python of this size would hunt for large prey, such as boars or wild dogs.

While they normally avoid human settlements, they would see palm oil plantations as a good hunting ground, he said, as they attract animals like boars, primates or dogs.