Commemorations have begun in Rwanda to mark the 25th anniversary of the genocide that killed about a tenth of the population. 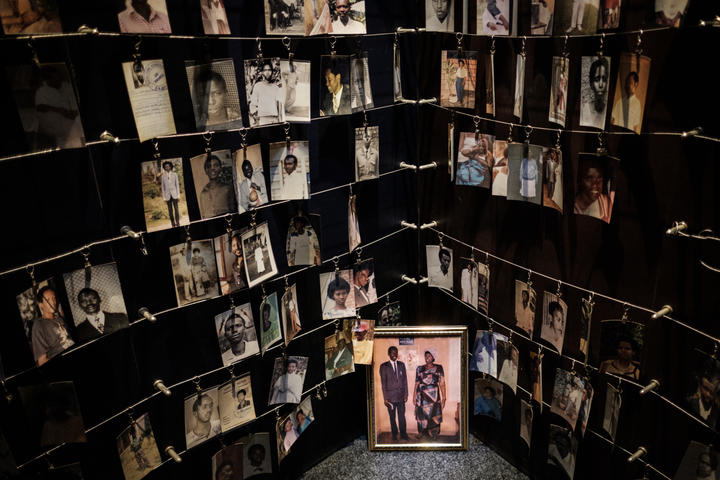 Most were minority Tutsis, killed by ethnic Hutu extremists.

President Paul Kagame, who led the rebel force that ended the genocide, will light a remembrance flame at the memorial in the capital, Kigali.

How will Rwanda remember?

One week of commemoration activities will begin with Mr Kagame lighting the flame at the memorial, where about 250,000 victims are said to be buried.

The 61-year-old president, who has led the country since the end of the genocide, is scheduled to make a speech at the Kigali Convention Centre.

He will then lead a vigil at the Amahoro National Stadium, which was used by United Nations officials to try to protect Tutsis during the killings.

A number of foreign leaders are expected to be at some of the events. They are mainly African, although Prime Minister Charles Michel will represent the former colonial ruler, Belgium.

French President Emmanuel Macron will not be there. This week he appointed a panel of experts to investigate France's role in the genocide.

France was a close ally of the Hutu-led government prior to the massacres and has been accused of ignoring warning signs and training the militias who carried out the attacks.

France will be represented by Herve Berville, a Rwandan-born MP.

Ugandan President Yoweri Museveni will also not be there. He has been accused of backing Rwandan rebels who oppose Mr Kigali.

How did the genocide unfold?

On 6 April 1994, a plane carrying then-President Juvenal Habyarimana - a Hutu - was shot down, killing all on board.

In a well-organised campaign of slaughter, militias were given hit lists of Tutsi victims. Many were killed with machetes in acts of appalling brutality.

One of the militias was the ruling party's youth wing, the Interahamwe, which set up road blocks to find Tutsis, incited hatred via radio broadcasts and carried out house to house searches.

How did it end?

Little was done internationally to stop the killings. The UN and Belgium had forces in Rwanda but the UN mission was not given a mandate to act. The Belgians and most UN peacekeepers pulled out.

The RPF, backed by Uganda, started gaining ground and marched on Kigali. Some two million Hutus fled, mainly to the Democratic Republic of Congo.

The RPF was accused of killing thousands of Hutus as it took power, although it denies this.

Dozens of Hutus were convicted for their role in the killings by the International Criminal Tribunal for Rwanda, based in Tanzania, and hundreds of thousands more faced trial in community courts in Rwanda.

How is Rwanda now?

The genocide has cast a long shadow over regeneration and talk of ethnicity remains illegal.

But the country has recovered economically, with President Kagame's policies encouraging rapid growth and technological advancement.

He won a third term in office in the most recent election in 2017 with 98.63 percent of the vote.

Growth remains good - 7.2 percent in 2018 according to the African Development Bank.

But Mr Kagame's critics say he is too authoritarian and does not tolerate dissent.