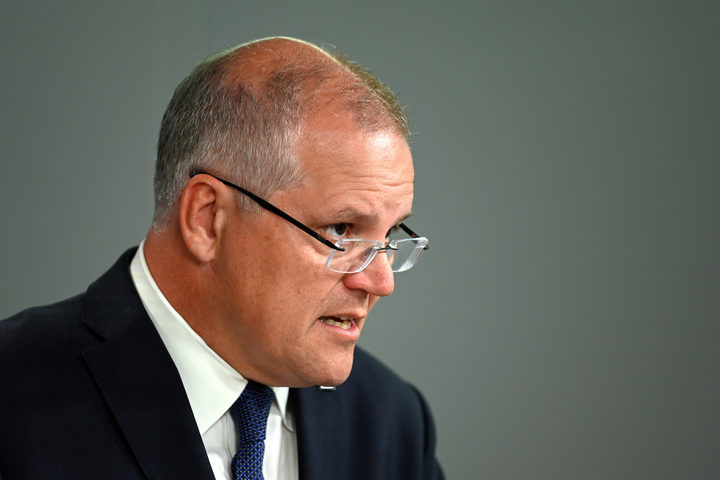 The three-year royal commission will be based in Brisbane and led by former Federal Court judge Ronald Sackville QC, who will be supported by five commissioners.

"We have to establish a culture of respect for people living with disabilities and the families who support, love and care for them," Mr Morrison said.

Mr Morrison became choked up as he spoke about Australians living with a disability, including his brother-in-law Garry Warren who has multiple sclerosis.

"As my brother-in-law Garry also said to me, 'it is not flash being disabled but the good thing is that that's the condition you live with in Australia and that you're an Australian'," he said.

"That has always meant a lot to me."

Mr Morrison's voice then cracked, and he looked down and adjusted his papers as he paused and collected himself.

"They deserve our respect," he continued.

He finished his opening remarks saying "to all those Australians with a disability, their families, to Garry, this is for you".

Labor leader Bill Shorten said he was pleased the royal commission had been called before the imminent federal election.

"A royal commission into people with disabilities is overdue," he said.

"Labor supported this nearly two years ago. I'm glad the government's come on board on election eve.

"But I'm not even worried about the government's motivations here. This is what we wanted."

Greens senator Jordon Steele-John, who has used the year he has spent in federal politics leading the charge for a royal commission, said he was satisfied with the choice of commissioners.

"This is one of the most happy days of my life," he said.

"This is a great victory for the disability rights movement in Australia, for the Greens who have been campaigning alongside activists now for five years to get this done."

Interim report expected by end of next October

Mr Morrison said the draft terms of reference had attracted 3700 responses, a third of which came from people living with a disability.

"Importantly the panel of six commissioners includes those with a lived experience of disability as well as judicial and policy expertise, and including Indigenous leadership," Mr Morrison said.

"I want to thank all of those commissioners who have agreed to take on this incredibly important task."

The government expects the royal commission to release an interim report by the end of October next year, with a final report due by the end of April 2022.

Mr Morrison said, if re-elected next month, a Coalition government would give the royal commission more time if it needed.

He said the cost and time for the royal commission was greater than other inquiries because it would need additional resources to allow people with disabilities right across the country to give evidence.

"It is very important that those in remote communities also have a full opportunity to be engaged here," he said.