How should you greet a pope? For centuries, it was Catholic tradition to kiss the papal foot. Nowadays, many faithful choose to bow and kiss the papal ring. 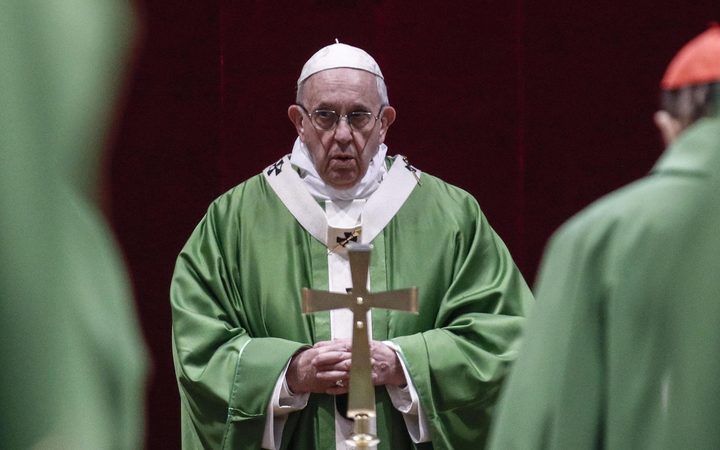 Conservative Catholics, who routinely accuse the current Pope of straying from church doctrine and tradition, now suspect that he has an end to ring-kissing in his sights.

They point to video taken on Monday in the Italian town of Loreto, which shows the Pope withdrawing his hand from Catholics trying to kiss his ring.

But the fuller picture is quite different.

Pope Francis really doesn't want anyone kissing his ring.
This from today, after Mass ... pic.twitter.com/CZUO8ppNfo

The Pope's actions in the video are a short section of a much longer sequence.

Official Vatican TV footage shows that Francis stood in a receiving line for around 13 minutes and received at least 113 monks, nuns, and parishioners - either individually or in pairs.

No one appeared to offer any instruction on how to greet him. During the first 10 minutes, 14 people shook Francis's hand without bowing down to kiss his ring.

In this time, 41 people bowed down towards Francis' hands, either making the symbolic gesture of kissing his ring, or actually kissing the ring itself.

The Pope did not protest.

Nine went even further. They bowed and kissed his ring, and then embraced him as well (one particularly devout monk outmatched everyone else by kissing both of the Pope's hands.)

After the first 10 minutes, the Pope's behaviour changed. The greeting line appeared to speed up.

During a 53-second period, Francis snapped his hand away from 19 people trying to bow and kiss his ring. One particularly unfortunate man ended up kissing his own hand after the pope suddenly withdrew from the greeting.

And this is the section which has been widely shared online.

It may be that the Pope was in a hurry to get to the end of the receiving line - and it's notable that, afterwards, he went on to spend more time greeting people, many in wheelchairs, at the front of the church.

Francis may not enjoy his ring being kissed, but it's inaccurate to suggest he rejected all those that day who attempted the gesture.

The papal ring, worn on the third finger of the right hand, may be the most powerful symbol of a pontiff's authority.

As soon as a pope dies, the ring is immediately destroyed in order to indicate the end of his reign.

Kissing a papal ring is often freighted with centuries worth of political and religious significance.

In 1963, US President John F Kennedy, a Catholic, deliberately chose not to kiss the ring of Pope Paul VI when they met in the Vatican - for fear of giving ammunition to critics who said that a Catholic president would always be subservient to Rome. 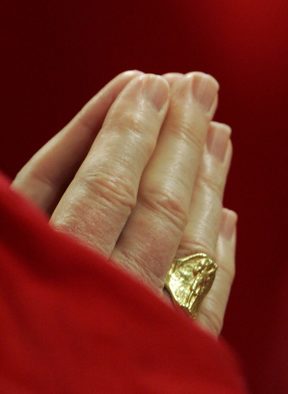 The current Pope is extremely aware of the significance of the gesture.

It may be that he prefers to deploy it the other way round.

During a joint visit to Jerusalem in May 2014, Francis made great efforts to kiss the hand of the leader of the Orthodox Church, Ecumenical Patriarch Bartholomew I, as a sign of reconciliation between their branches of Christianity.

The patriarch tried to resist, ending in a friendly tussle won by the Pope.

On the same trip, at Israel's Holocaust Memorial, Francis was invited to shake hands with Holocaust survivors.

To their surprise, he bowed down and kissed their hands - a gesture which is remembered years later.