A US senator has said that she was raped by a superior officer while serving in the Air Force. 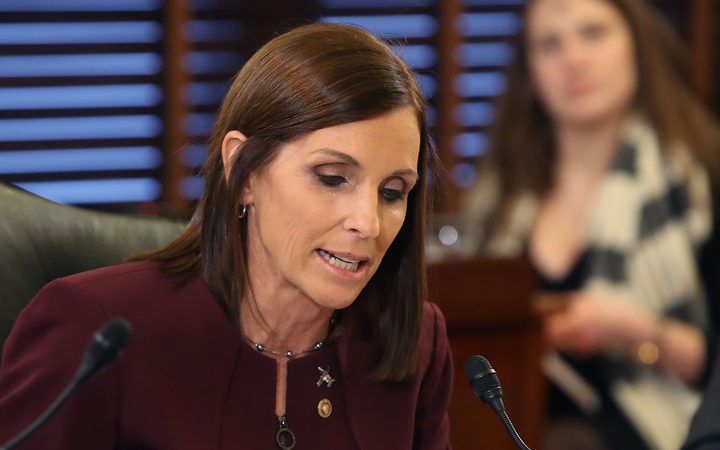 Arizona Republican senator Martha McSally she did not report the rape as she felt ashamed and confused and distrusted the system. Photo: AFP / Getty Images

Senator Martha McSally, who was the first female US fighter pilot to fly in combat, was speaking at a hearing on sex assaults in the military.

The Arizona Republican said she did not report the rape as she felt ashamed and confused, and distrusted the system.

In 2017 nearly 6800 sexual assaults were reported in the US military, a 10 percent rise on the previous year.

Ms McSally, 52, was speaking on Wednesday during a hearing of the Senate Armed Services subcommittee featuring victims of sexual assault.

"The criminal actions reported today by Senator McSally violate every part of what it means to be an Airman," an Air Force spokeswoman said in a statement in response to her testimony.

"We are appalled and deeply sorry for what Senator McSally experienced and we stand behind her and all victims of sexual assault."

Ms McSally said she hoped to give sexual assault survivors hope by revealing her experience.

"Like you, I also am a military sexual assault survivor, but unlike so many brave survivors, I didn't report being sexually assaulted," she said. "Like so many women and men, I didn't trust the system at the time."

"I blamed myself. I was ashamed and confused," she said. "The perpetrators abused their position of power in profound ways. In one case I was preyed upon and raped by a superior officer."

Ms McSally said she attempted years later to share her experiences with senior officers but met with "wholly inadequate responses".

"I almost separated from the Air Force at 18 years of service over my despair," she said.

Senator Kristen Gillibrand of New York, the top ranking Democrat on the committee, said she was "deeply affected by that testimony".

Who is Martha McSally?

Ms McSally served 26 years in the US Air Force, rising to the rank of colonel, before retiring in 2010.

She was then elected for two terms in the US House of Representatives, before becoming a senator in January.

It is not the first time Ms McSally has spoken about being a survivor of sexual abuse.

Last year, while running for the Senate, she told the Wall Street Journal her high school athletic coach had pressured her into having sex with him when she was 17.

She has previously said she was sexually harassed while in the military. In January, another female senator said she had been raped.

Joni Ernst, an Army combat veteran, said she was sexually assaulted by an abusive boyfriend while she was a student at Iowa State University.

The Iowa Republican told Bloomberg she did not report the incident to police.