At least 23 people, some of them children, have died after a tornado swept through Lee County Alabama.

Sheriff Jay Jones told the Associated Press the toll could rise, but rescue efforts had to stop until dawn due to the danger of searching in the dark.

"The challenge is the sheer volume of the debris where all the homes were located," Sheriff Jay Jones said in an interview with CNN. "It's the most I've seen that I can recall."

It is unknown how many are injured. Authorities have blocked off the area. 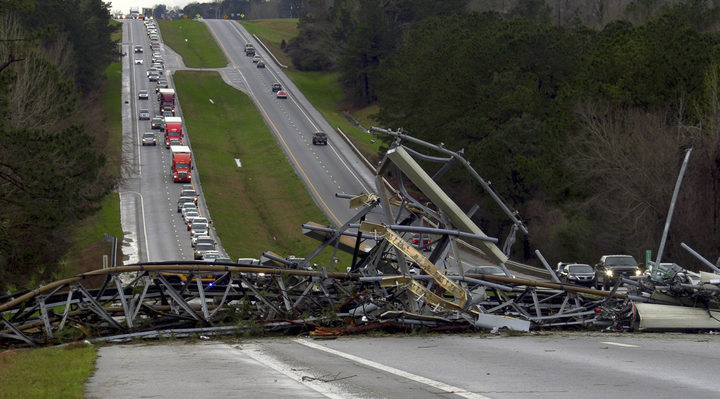 A fallen cell tower lies across U.S. Route 280 highway in Lee County, Ala., in the Smiths Station community after what appeared to be a tornado struck in the area. Photo: AP / Mike Haskey/Ledger-Enquirer

Severe weather unleashed one of numerous possible tornadoes that threatened the Southern United States on Sunday afternoon. Tornado warnings and watches were in effect for parts of Georgia and Alabama through Sunday evening.

Our hearts go out to those who lost their lives in the storms that hit Lee County today. Praying for their families & everyone whose homes or businesses were affected. Officials from @AlabamaEma & other agencies are quickly working to provide assistance.

Alabama Governor Kay Ivey warned residents on Twitter that more severe weather might be on the way. She said the state was working to help families who had been impacted.

"Our hearts go out to those who lost their lives in the storms that hit Lee County today," Ms Ivey wrote on Twitter. "Praying for their families & everyone whose homes or businesses were affected."

The National Weather Service (NWS) classified the first tornado to strike as at least an EF-3 - meaning winds of up to 266km/h.

Mr Jones described the damage as "catastrophic", saying one tornado cut a path of destruction quarter of a mile (0.4km) wide and several miles long.

Tornado watches were in effect in parts of Alabama and in Georgia on Sunday evening.

Alabama meteorologist Eric Snitil tweeted that there were more deaths in Lee County in one day due to a tornado than in the entirety of the US in 2018.

The National Weather Service said it would send three survey teams to assess the damage caused by tornados across the state on Monday.

All schools in Lee County will be closed on Monday, the school district announced.