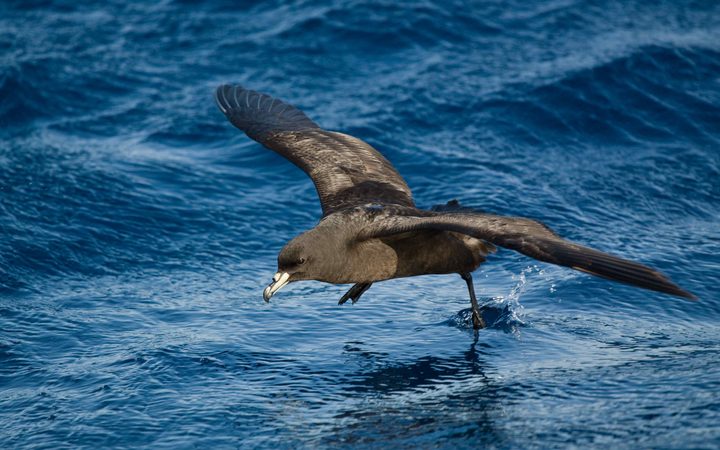 Seabirds, such as the black petrel pictured, are the most threatened birds in the world. Photo: Neil Fitzgerald

Seabirds are the world's most threatened group of birds, with nearly half of the species experiencing population decline,

Researchers studying the gut contents of dead seabirds have found balloon debris is the most lethal type of plastic the birds can swallow.

The waters off south-eastern Australia and south-west of New Zealand, where the Tasman Sea boundary meets the Southern Ocean, have the greatest diversity of seabirds in the world.

Because of this rich diversity, researchers said this is where the worst consequences of marine plastic pollution could be felt.

Although most of the balloons removed from dead birds in the study, which is published today in Scientific Reports, were degraded and lacked markings, researcher Lauren Roman, from the CSIRO and University of Tasmania, said she believed they were mostly party balloons.

"We found a balloon that actually had some branding on it, and we traced it back to an event in Sunnybank [in Brisbane]. Most likely that was one that a kid had let go."

The researchers compared more than 1700 birds of the order Procellariiformes, which include petrels, shearwaters and albatross.

They compared birds killed by eating plastics with other causes such as fishing bycatch, infant mortality and disease.

Predictably, the birds that had not died from ingesting plastic had significantly less plastic in their stomachs.

But among those that had died from eating plastic, animals that swallowed balloon fragments were 32 times more likely to die than birds that had only eaten hard plastics - think Lego pieces or lollipop sticks.

Balloons may resemble squid, give off scent

The reason balloons and other soft plastics are so lethal, according to the researchers, is that they are able to squeeze into stomach cavities.

"A hard piece of plastic has to be the absolute wrong shape and size to block a region in the bird's gut, whereas soft rubber items can contort to get stuck," Dr Roman said.

Dr Roman and her team hypothesised that the birds may be attracted to the balloon fragments floating near the surface because they resemble squid - a common prey item.

Plastics floating in the ocean for long periods may also give off scent cues for birds, according to Mark Hamann from James Cook University.

"That fits with the general knowledge that birds are using visual cues to find prey," Associate Professor Hamann said.

"But products floating in the water are growing biofilms that are also attractive to predators."

In total, 551 of the 1700 dead birds had plastic in their stomach, and 13 were confirmed to have died from plastic ingestion.

A further nine were considered highly likely to have died from eating plastic.

Of the 32 birds found with balloon fragments in their stomach, the balloon was the cause of death in five.

Although there are laws against releasing balloons into the environment, replacing plastic polymers with biodegradable alternatives could also be an option to prevent seabird deaths, Dr Hamann said.

"Balloons are made from a polymer that will persist in the environment for a long time," he said.

"Developing polymers to replace those plastics is an increasingly interesting research avenue now."