President Trump has confirmed he will use emergency powers to build a wall on the US border with Mexico, saying "walls work". 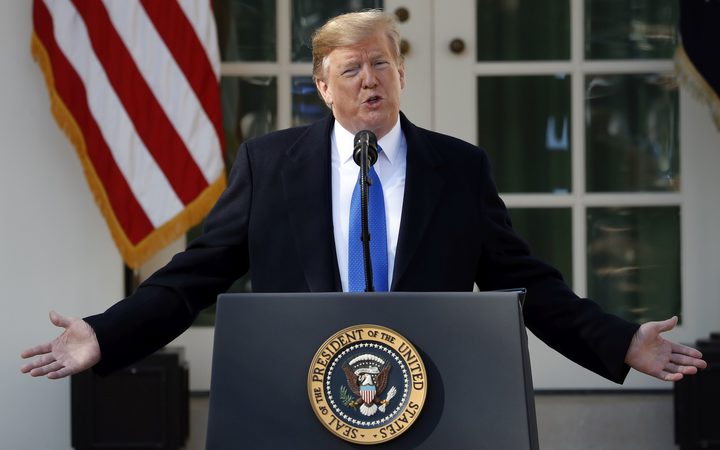 US President Donald Trump making the announcement about the wall at an event in the Rose Garden at the White House. Photo: AP

Building the wall was a key pledge of Mr Trump's election campaign, but Democrats have described the emergency as a "gross abuse of power".

He is due to sign the plan along with a spending bill aimed at preventing a repeat of a recent government shutdown.

He announced the plan after Congress refused to pay for a wall in the bill.

However, senior Democrats said immediately that they would challenge the move in the courts.

The declaration will give Mr Trump access to billions of dollars for his project.

What did Mr Trump say?

Making the announcement to journalists in the White House Rose Garden, the president said the emergency would allow him to get almost $US8 billion for the wall.

The money is expected to be diverted from military construction projects and efforts to fight the drugs trade.

This is still considerably short of the estimated $23bn cost of the wall along almost 2,000 miles (3,200km) of border.

"Everyone knows that walls work."

But Mr Trump accepted that he would be sued for the move, and predicted that the emergency order would lead to legal action which was likely to end up in the Supreme Court.

How have Democrats responded?

House of Representatives Speaker Nancy Pelosi and Senate Democrat leader Chuck Schumer responded to Mr Trump's announcement with a statement saying they would challenge the move in Congress and in the courts "using every remedy available".

"The president's unlawful declaration over a crisis that does not exist does great violence to our Constitution and makes America less safe, stealing from urgently needed defence funds for the security of our military and our nation," the statement said.

"This is plainly a power grab by a disappointed President, who has gone outside the bounds of the law to try to get what he failed to achieve in the constitutional legislative process."

The National Emergencies Act contains a clause that allows Congress to terminate the emergency status if both houses vote for it - and the president does not veto.

With a comfortable majority in the House, Democrats could pass such a resolution to the Senate. The Republicans control the Senate, but a number of Republican senators have been vocal in their unease about the president invoking a national emergency.

The dissenting Republicans include 2012 presidential contender and new senator for Utah Mitt Romney, Florida senator Marco Rubio, and the senator from Maine Susan Collins, who said the move was of "dubious constitutionality".

The resolution would however still require Mr Trump's signature to pass, allowing him to veto it. A supermajority in both houses of Congress is needed to overturn a presidential veto.

What is a national emergency?

The National Emergencies Act is intended for times of national crisis. Mr Trump has claimed that there is a migration crisis at the nation's southern border - a claim strongly refuted by migration experts.

The largest number of illegal migrants settling in the US each year is those who stay in the country after their visas expire.

Declaring a national emergency would give the president access to special powers that effectively allow him to bypass the usual political process, and he would be able to divert money from existing military or disaster relief budgets to pay for the wall.

Mr Trump's decision to apply the powers to overcome a partisan impasse over border security has struck politicians on both sides of the aisle as a deviation from the intended use of the act.

"It would be a pretty dramatic expansion of how this was used in the past," said Republican senator Ron Johnson.