Venezuelan President Nicolas Maduro's government has stepped up a legal battle against efforts to oust him, while the opposition says the international community has pledged more than $US100 million in aid for the country. 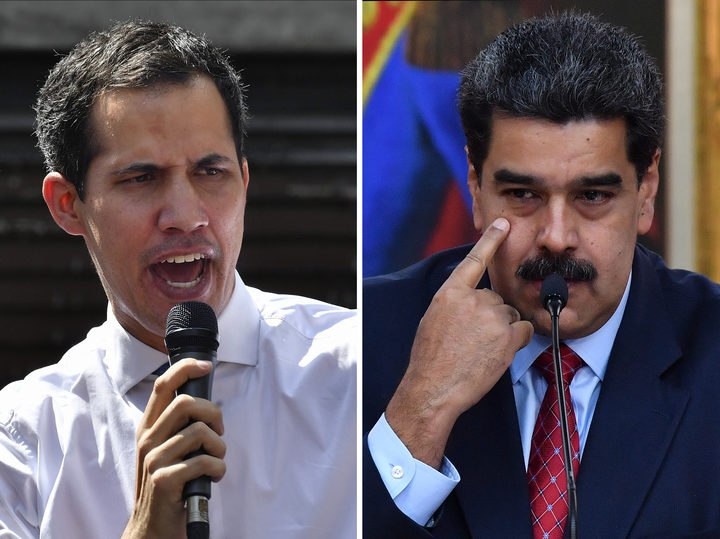 US-backed opposition leader Juan Guaido (left) is attempting to wrestle key oil assets away from the Venezuelan state, but President Nicolas Maduro is waging a legal battle to block the move. Photo: AFP

Venezuela's opposition, which argues Maduro's presidency is illegitimate because he won in a disputed vote, is trying to wrest control of the Organisation of the Petroleum Exporting Countries or OPEC nation's oil sector from him and deliver aid to a population suffering food and medicine shortages.

Mr Maduro says this is part of a strategy to carry out a US-backed coup and has vowed to remain in office. Mr Maduro retains the backing of key allies Russia and China as well as loyalty of Venezuelan state institutions, including the military.

The Supreme Court then ruled that the proposed board members were prohibited from leaving the country. At least some of the people are believed to already be outside Venezuela.

Mr Saab ruled Mr Guaido had "grotesquely made circus-style appointments" in order to please foreign interests and destabilise the country.

"The only directors legitimately appointed to the boards of PDVSA and its subsidiaries are those ... who have been appointed by the executive," Mr Saab said, according to his office's Twitter account.

In an attempt to divide Maduro's party, a top opposition lawmaker said the transitional government should include members of the ruling "Chavismo" movement and military leadership, in an effort to guarantee stability for new elections.

That interim government would have 13 months to hold fresh presidential elections from the date Mr Maduro officially steps down as president, Stalin Gonzalez, the second vice president of the congress, told Reuters.

"We need to give space to sectors of Chavismo that are not Maduro because we need political stability," Mr Gonzalez said in an interview.

The opposition, made up of a coalition of parties, plans to hold primaries in order to put forward a sole candidate for the presidential elections, he added. Chavismo is the movement founded by former President Hugo Chavez, who Mr Maduro succeeded following Mr Chavez's death in 2013 from cancer.

Mr Guaido's US representative, Carlos Vecchio, spoke to an aid conference today hosted at the right-wing Organization of American States' (OAS) headquarters in Washington, to urge the international community to help get assistance into Venezuela.

Mr Vecchio and his aides estimated they had received pledges of more than $US100 million in humanitarian assistance from the United States and others, including previous commitments as well as new ones made at the conference.

"We must open thousands of windows to bring humanitarian aid to Venezuela," Mr Vecchio told the conference, which was attended by diplomats and representatives from dozens of countries.

Elliott Abrams, Washington's special representative on Venezuela, said the United States was looking for ways to send in aid as he reiterated US support for Mr Guaido.

"I can assure you that there will be more US assistance coming in the future," Mr Abrams said, without giving specifics.

Cuba accused the United States of moving special forces closer to Venezuela as part of a covert plan to intervene.

"It's a new lie," Mr Abrams said, when asked about it at the Washington event.