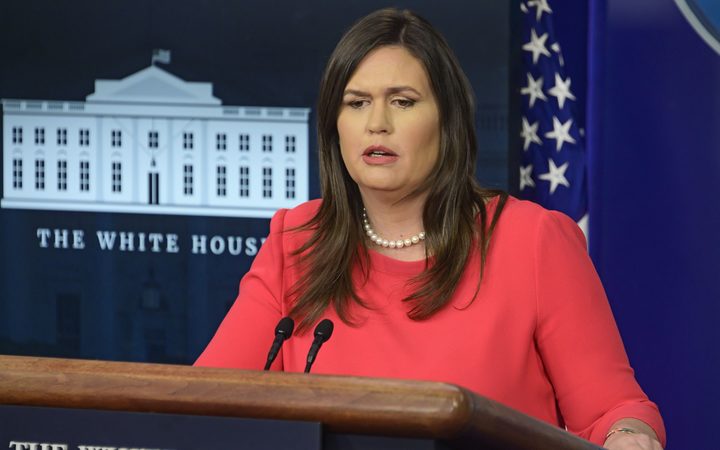 Ms Sanders made the claim in an interview with the Christian Broadcasting Network (CBN), saying it was the reason Mr Trump was in office.

The press secretary also said it was "very hard" to take morality lessons from the Democratic Party.

US evangelicals strongly support the president.

CBN broadcast the interview with Ms Sanders on Wednesday, conducted by David Brody and Jennifer Wishon.

Responding to Mr Brady's question about Mr Trump's position, Ms Sanders said: "I think God calls all of us to fill different roles at different times and I think that He wanted Donald Trump to become president."

"That's why he's there and I think he has done a tremendous job in supporting a lot of the things that people of faith really care about."

When asked about House Speaker Nancy Pelosi position on the proposed border wall - a divisive issue at the heart of the longest US government shutdown in history - the press secretary attacked Ms Pelosi's suggestion such a barrier was immoral.

"Honestly, it's very hard at this point to even take a lecture from Democrats on what is moral and what isn't," she said, calling it a "ridiculous charge" and saying Ms Pelosi "may even regret making that comment".

"Protecting the people of your country... is the fundamental duty of being president of the United States," Ms Sanders said.

The interview comes days after Mr Trump tweeted his support for Bible study.

"Public schools are for education, not religious indoctrination."