Israel's military says it has hit Iranian targets inside Syria. 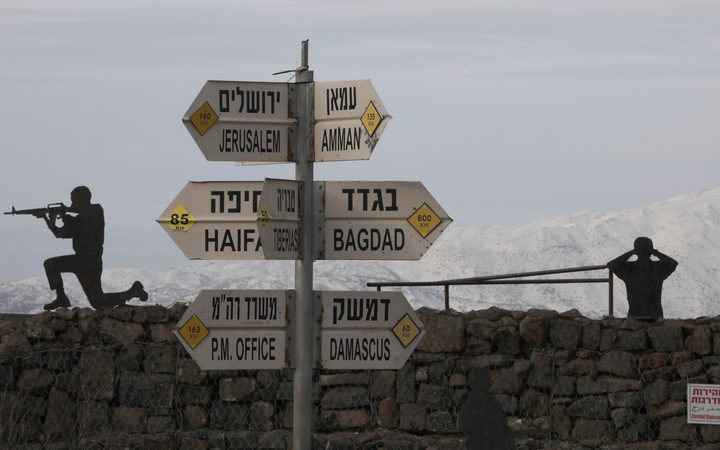 A view of Mont Bental in the Israeli-occupied Golan Heights, on 20 January 2019. Photo: AFP

The Israel Defense Forces (IDF) says its operation is against the Quds Force - elite units of the Iranian Revolutionary Guards.

It provided no details. But there were reports of strikes around the Syrian capital Damascus early on Monday.

Syrian media said air defences had repelled "an Israeli aerial attack". On Sunday the IDF said it had intercepted a rocket over the Golan Heights.

The IDF announced the start of its operation in a tweet early on Monday.

Syria's state-run Sana news agency quoted a military source as saying that the country's air defences shot down most of "hostile missiles".

The UK-based Syrian Observatory for Human Rights (SOHR) says Israeli rockets were targeting "the vicinity of the capital Damascus".

Witnesses in Damascus spoke of hearing loud explosions in the night sky.

The SOHR also said there had been fatalities.

Israel rarely admits carrying out attacks on targets inside Syria.

The operation comes after Israel said that "a rocket was fired at the northern Golan Heights and was intercepted by the Iron Dome Aerial Defence System".

The popular winter tourist site on Mount Hermon in the Golan Heights was closed as a result.

Israeli Prime Minister Benjamin Netanyahu issued a warning during his visit to Chad on Sunday.

"We have a set policy, to target the Iranian entrenchment in Syria, and to harm whoever tried to harm us," he said.

Israel has expressed alarm at Iran's deployment in Syria in support of President Bashar al-Assad, who has been battling rebel forces and Islamist groups since the start of the civil war in 2011.

In May 2018, Israel said it had struck almost all of Iran's military infrastructure there, following a rocket attack on its positions in the Golan Heights.

Israel seized the area from Syria during the 1967 Six-Day War and later annexed it.