Transgender communities in India are urgently trying to stop the passage of a Bill which purports to protect their rights but they say actually violates more rights than it claims to protect. 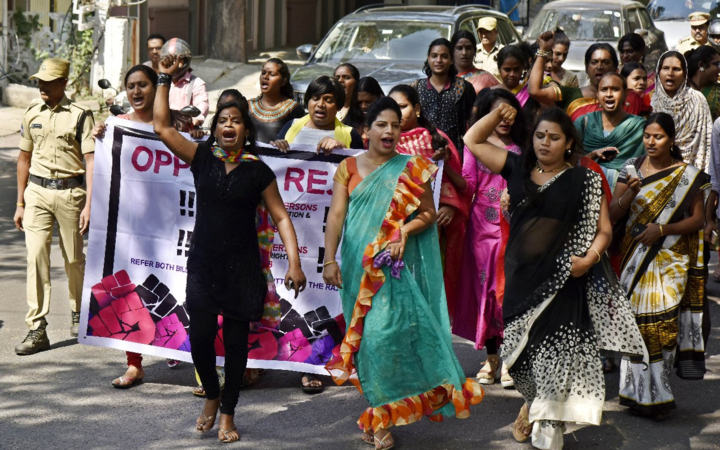 A group took to the streets in Hyderabad to protest the Bill following on from protests last month. Photo: Twitter / @meeracomposes

The Transgender Persons (Protection of Rights) Bill 2018 has passed in the the Lok Sabha (lower house of Parliament) and is due to face the Rajya Subha (upper house) tomorrow, 8 January.

While its name suggests the Bill is a protection of rights for transgender people, the rights of both transgender and intersex communities will be severly dialed back if it is to pass, say trans groups.

It's a Bill that "faces unanimous opposition from all trans people", Meera Sanghamitra of the National Alliance of People's Movements (NAPM) and Telangana Hijra Intersex Transgender Samiti (THITS) wrote on Twitter.

Various iterations of the Transgender Persons (Protection of Rights) Bill have been drafted since 2014, with public imput from transgender and intersex communities, but the 2018 Bill includes 27 amendments that ignores that community feedback.

Its passing in the lower house caused thousands of people to take to the streets across India in protest, with groups converging on Parliament Street in Delhi on 28 December.

The hashtag #Stoptransbill2018 is now abuzz on social media as activists continue to raise public awareness and urge for the Bill not to "move an inch" more.

What are the Indian trans community's problems with the Bill?

The bill does not talk about any livelihood schemes or reservations for trans persons (in contradiction to the Supreme Court's orders) but it criminalises begging and sex work - the only livelihood option available in a cis-patriarchal society. https://t.co/0xnRwv03Qd

The Bill "violates more rights than it claims to protect" say a group of 45 LGBTI students and groups across India who have written in a collective statement publically condemning it.

"It stands in stark violation of the fundamental rights of transgender persons enshrined in the Constitution as equal citizens," they said.

And they are not the only group to come out against the Bill, the Lawyers Collective, a legal NGO whose founders include senior advocates at the Supreme Court of India - Indira Jaising and Anand Grover, has called it "regressive, flawed and contrary to rights".

A coalition of sex workers and sexual minorities' rights in Karnataka, are demanding the Bill, as well as the Trafficking of Persons (Prevention, Protection and Rehabiliation) Bill, 2018, not be introduced in the upper house and inserted be referred to a Select Committee.

And the International Commission of Jurists "considers this Bill to be a missed opportunity to address the serious problem of discrimination against transgender people in India".

"It is a huge backward step from the international human rights standards that were recognised in the landmark NALSA judgement by India's Supreme Court in 2014," Jack Byrne, a trans human rights researcher specialising in legal gender recognition issues and co-author of a regional report for UNDP and the Asia Pacific Transgender Network, told RNZ.

The landmark 2014 Supreme Court decision allowed transgender people to self-identify as third gender, or within the binary of male or female, granting them fundamental rights under India's Constitution and allowing for a third gender option on all identity documents.

However, the judgement has never been implemented.

"Widespread stigma and discrimination mean that even in states where supportive laws and policies have been developed, implementation is very ad hoc and fragmented."

He said trans people in India face high levels of poverty, unemployment, stigma and discrimination, and police harassment through the use of public nuisance laws and criminal laws against sex work and begging.

Screening committees are sites of violence which demands that a trans person parade themselves naked to "prove" they are indeed trans. We have already seen how vulnerable trans women are stripped naked and raped in police stations and jails. And in hospitals. https://t.co/0xnRwv03Qd

Dr Sylvia Karpagam, a public health doctor, writer and researcher in India, described the Bill as a "healthcare nightmare" in an article for The News Minute.

She writes that neither the public nor private health systems in India are equipped to meet the basic psychological needs of a trans person.

And she notes the the Bill contradicts itself: "If a transgender person has a right to 'self-perceived gender identity', then what is the need to "make an application to the District Magistrate for issuing a certificate of identity as a transgender person…. with such documents, as may be prescribed'?

"Power to determine gender should lie with the individual concerned. All systems should be in place to support this process rather than take over decision making."

Dr Karpagam said media reports of trans people being rounded up, pulled from their home and forcibly imprisoned in 'beggar's homes', is common. The Bill states a trans person will be placed in a rehab centre if a parent or immediate family member is "unable to take care" of them. Similar rehab centres leave women without access to healthcare, law or any form of support, she said.

Will the Bill pass?

"It is unclear what will happen in tomorrow's vote," said Jack Byrne.

"One option is that the supportive politicians will block the Bill's passage and send it back to a Select Committee for further consultation."

There seems to be very little in the bill by way of protection from harm, and even less by way of recourse and justice. The bill is silent on what a trans person can do, who they can approach to complain. As it is police stations are already sites of violence for trans persons https://t.co/MewGoQqont