Communist Party leader Raul Castro has blasted the Trump administration on the 60th anniversary of Cuba's revolution for returning to a policy of isolating the island nation and of intervening in Latin America. 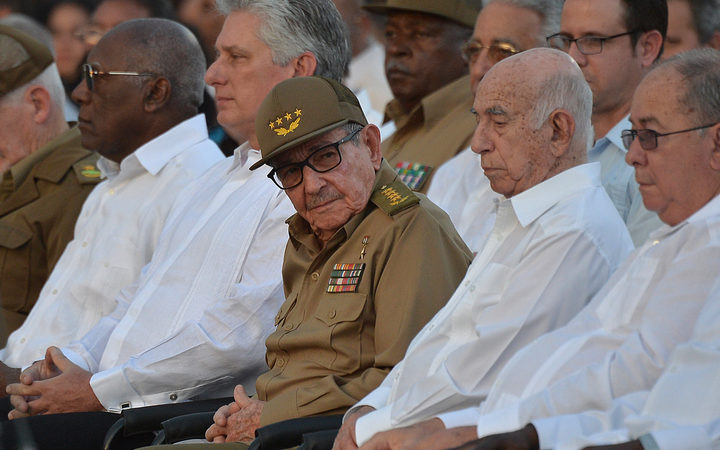 Raul Castro and President Miguel Diaz-Canel (second from left) take part in the celebration of the 60th anniversary of the Cuban revolution at the Santa Ifigenia Cemetery in Santiago de Cuba. Photo: AFP

Castro and his late, elder brother Fidel Castro led the rebel band that in 1959 overthrew a US-backed dictator and created a Communist-run country on the doorstep of the United States, setting the scene for decades of Cold War hostility.

At the time, their revolution inspired leftist movements throughout Latin America, but the celebrations today came as the region was shifting rightwards, coinciding with the inauguration of Brazil's far-right President Jair Bolsonaro.

Some of Cuba's closest allies, Venezuela and Nicaragua, are in political crisis, and US President Donald Trump has tightened the decades-old US embargo on the island, after his predecessor, Barack Obama, had sought to normalise relations.

"Once again, the North American government is taking on the path of confrontation with Cuba," Castro said in the southeastern city of Santiago de Cuba where Fidel Castro proclaimed victory six decades ago.

The speech by Castro, who stepped down as president in April but remains head of the Communist Party until 2021, was part of a solemn, sunset ceremony in a cemetery where both Fidel Castro and independence hero Jose Marti are buried.

"Increasingly, high-ranking officials of this administration are ... trying to blame Cuba for all the region's ills," he said, adding that they stemmed instead from "ruthless neoliberal policies".

Trump's national security adviser, John Bolton, said in November that Washington would take a tougher line against Cuba, Venezuela and Nicaragua, calling them "a troika of tyranny".

Clad in military fatigues and cap, the 87-year old Castro said Cuba had proven throughout six decades of revolution it could not be intimidated by threats. Instead it remained open, he said, to a peaceful and respectful coexistence.

Cuba's true battle this year was an economic one, he added, reiterating comments made at the national assembly in late December by his successor, President Miguel Diaz-Canel, who announced increased austerity for the fourth year running in 2019 in the face of a cash crunch.

"We need first of all to reduce all non-necessary expenses and to save more," said Castro.

A decade ago, as president, he introduced a series of reforms to liberalise and boost the centrally-planned economy.

A series of external shocks such as a decline in aid from Venezuela and devastation wrought by hurricanes have also dented growth, which is sluggish at best.

However, the Cuban revolution was on a secure footing thanks to the transition to a competent younger generation of leaders such as the 58-year old Diaz-Canel, Castro said.

"It is opportune to express the fact that the Cuban Communist Party decidedly backs the words and actions of Diaz-Canel since he took office," Castro said.

"The revolution has not aged, it remains young," he said.