The Voyager 2 probe, which left Earth in 1977, has become the second human-made object to leave our Solar System. 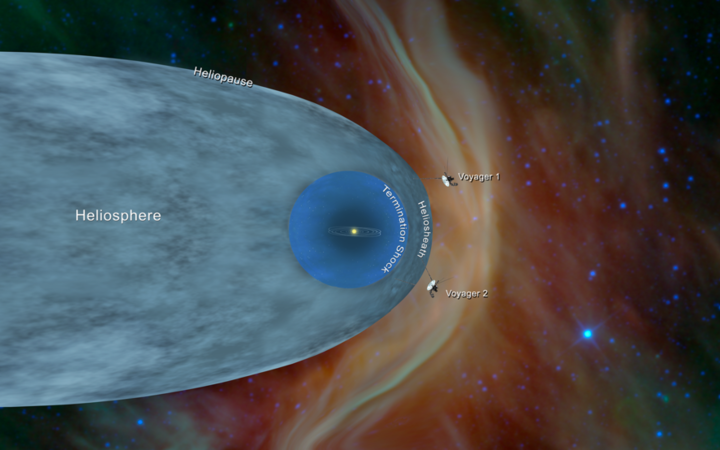 This illustration shows the position of NASA's Voyager 1 and Voyager 2 probes, outside of the heliosphere, a protective bubble created by the Sun that extends well past the orbit of Pluto. Photo: NASA / JPL-Caltech

It was launched 16 days before its twin craft, Voyager 1, but that probe's faster trajectory meant that it was in "the space between the stars" six years before Voyager 2.

The news was revealed at the American Geophysical Union (AGU) meeting in Washington.

And chief scientist on the mission, Professor Edward Stone, confirmed it.

He said both probes had now "made it into interstellar space" and that Voyager 2's date of departure from the Solar System was 5 November 2018.

On that date, the steady stream of particles emitted from the Sun that were being detected by the probe suddenly dipped. This indicated that it had crossed the "heliopause" - the term for the outer edge of the Sun's protective bubble of particles and magnetic field.

While its twin craft beat it to this boundary, the US space agency says that Voyager 2 has a working instrument aboard that will provide "first-of-its-kind observations of the nature of this gateway into interstellar space".

Did the the team plan to explore beyond the Solar System?

The Voyagers were sent initially to study the outer planets, but then just kept on going.

Prof Stone said that at the start of the mission the team had no idea how long it would take them to reach the edge of the Sun's protective bubble, or heliosphere.

"We didn't know how large the bubble was, how long it would take to get there and if the space craft would last long enough," he added. "Now we're studying the very local interstellar medium.

"It's a very exciting time in Voyager's 41 year journey."

Scientists define the Solar System in different ways, so Prof Stone has always been very careful not to use the exact phrase "leave the Solar System" in relation to his spacecraft. He is mindful that the Nasa probes still have to pass through the Oort cloud where there are comets gravitationally bound to the Sun, albeit very loosely.

But both Voyagers certainly are in a new, unexplored domain of space.

The @NASAVoyager 2 probe no longer feels the solar wind & is flying through the interstellar space between the stars. It carries a working instrument providing 1st-of-its-kind observations of the nature of this gateway. Here's a look by the numbers: https://t.co/DuNBYPaXQj #AGU18 pic.twitter.com/GJGIgDpSHD

How long has this journey taken?

Decades and billions of kilometres. Voyager 1 departed Earth on 5 September 1977, a few days after its sister spacecraft, Voyager 2.

The pair's primary objective was to survey the planets Jupiter, Saturn, Uranus and Neptune - a task they completed in 1989.

They were then steered towards deep space. It is expected that their plutonium power sources will eventually stop supplying electricity, at which point their instruments and their 20W transmitters will die.

The Voyager project manager, Suzanne Dodd told BBC News that she would like to see them both keep going until 2027.

"It would be super-exciting to have a 50-year mission still operating," she added, describing the probes as "pioneers" of interstellar space."

Voyager 1 will not approach another star for nearly 40,000 years, even though it is moving at such great speed. But it will be in orbit around the centre of our galaxy with all its stars for billions of years.

"Every so often they phone home and say - 'I'm still going. Don't forget about me!'