The Central European University, founded by billionaire George Soros, said on Monday it had been forced out of Hungary in "an arbitrary eviction" that violated academic freedom, and it confirmed plans to open a new campus in Austria. 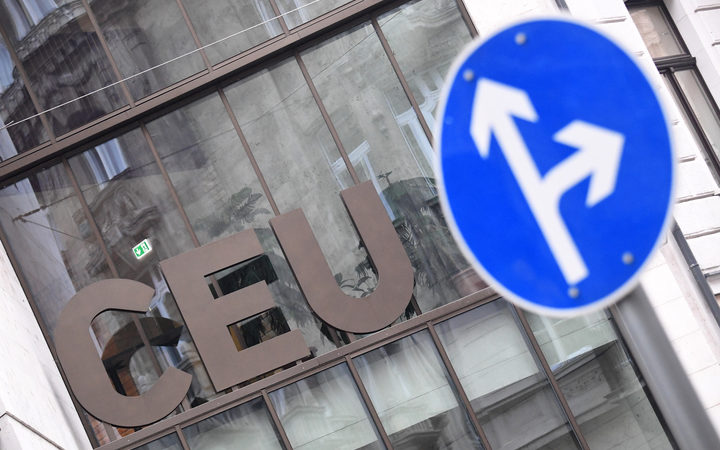 The logo of the Central European University (CEU) is pictured in Budapest on December 3, 2018 Photo: AFP

CEU's statement is the culmination of a years-long struggle between Hungarian-born but US-based Soros, who promotes liberal causes through his charities, and the nationalist, anti-immigrant government of Prime Minister Viktor Orban.

For nearly three decades CEU has been a gateway to the West for thousands of students from ex-communist eastern Europe, offering US-accredited degree programmes in an academic climate that celebrates free thought.

The university said it would leave Budapest if it had not secured guarantees of academic freedom by 1 December.

"Arbitrary eviction of a reputable university is a flagrant violation of academic freedom. It is a dark day for Europe and a dark day for Hungary," CEU's statement added.

Mr Ignatieff told a news conference later that the CEU had received a "clear and unequivocal" welcome in Austria.

The United States said it was "disappointed" that CEU was unable to remain in Hungary.

The European Commission, which has taken Hungary to the EU's supreme court over the education law that prompted the CEU move and has clashed with Orban over democracy issues, said it was "deeply concerned".

The law "needs to be brought back in line with EU law", said an EU spokesman. "It is now for the Court (of Justice of the European Union) to clarify this matter."

Guy Verhofstadt, the liberal leader in the European Parliament and a former Belgian prime minister, said Orban should feel "shame", adding that it was the first time since Oslo University was forced to close by Norway's Nazi German occupiers in 1943 that a European university had been shut down.

CEU's legal status has been in limbo for more than a year since changes to a higher education law that meant a foreign-registered university could no longer operate in Hungary unless it also provided courses in its home country.

CEU, founded in Budapest in 1991, says it has complied with all the new regulations set by Mr Orban's government, which has refused to sign off on an already agreed document with the State of New York that would allow CEU to stay.

Hungary's government has dismissed the university's move as a "Soros-style bluff".

CEU said it would start enrolling students for US degrees at its new campus in Vienna for the next academic year. Students already enrolled will complete their studies in Budapest.

The university retains accreditation as a Hungarian university and will seek to continue teaching and research activity in Budapest as long as possible, it said.