A prominent Syrian radio journalist has been shot dead by gunmen in the rebel-held Syrian province of Idlib. 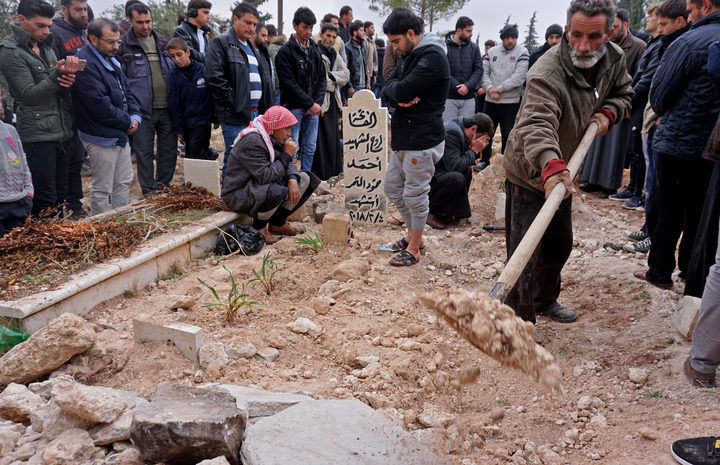 Mourners attend the funeral of Raed Fares and Hammoud al-Jneid in the village of Kafranbel in the northwestern province of Idlib. Photo: AFP

Raed Fares, a well-known Syrian activist, was killed in the north-western town of Kafranbel.

He and his radio station had been targeted by jihadist groups in the past.

Four years ago, when the Islamic State (IS) group had a presence in Idlib province, the station's office was raided by militants.

In 2016, Mr Fares was detained by the Nusra Front, the former al-Qaeda affiliate in Syria.

A new tragedy is added to our long tragic record, tens of times I’ve asked him to leave after he was targeted for the first time and then a second time, and now the third brutal terroristic targeting he has been killed. He was stubborn and dismissive, he would simply answer; pic.twitter.com/edymFcBIkC

The station's response was to play long sequences of other sounds, such as tweeting birds, clucking chickens and bleating goats.

"They tried to force us to stop playing music on air," the 45-year-old former estate agent told the BBC in 2017. "So we started to play animals in the background as a kind of sarcastic gesture against them."

Another group, the now-dissolved Jabhat Fateh al-Sham, once instructed the radio station to take women off the air. Instead of complying, Mr Fares told the BBC's Mike Thomson about his creative solution to get round the issue.

"We simply put their voices through a computer software program which makes them sound like men," he said.

Radio Fresh's Facebook page posted a graphic photo of Mr Fares's body on 23 November, along with an image of the body of Hammoud Juneid, another activist who was shot dead.

A vocal critic of President Bashar al-Assad, Mr Fares described a protest in Kafranbel on 5 October in his final Facebook post.

"The people of Kafranbel are in Huriyah [Freedom] Square and voices are chanting: The people want the downfall of the regime. We started this in 2011 and we are continuing on. Our loyalty to the martyrs and detainees has increased our determination."

News of his death led to an outpouring of grief on social media from activists and international journalists.

Don't want to believe @RaedFares4 has been killed. One of the few peaceful pro-democracy activists from the early days of the uprising who was still in #Syria .Tireless, uncompromisingly principled, good humored, big-hearted and much more. A huge loss. #KafraNbel . RIP my friend pic.twitter.com/XjWMhnfu3S