A new report describes the impact man is having on nature as a "mindblowing crisis". 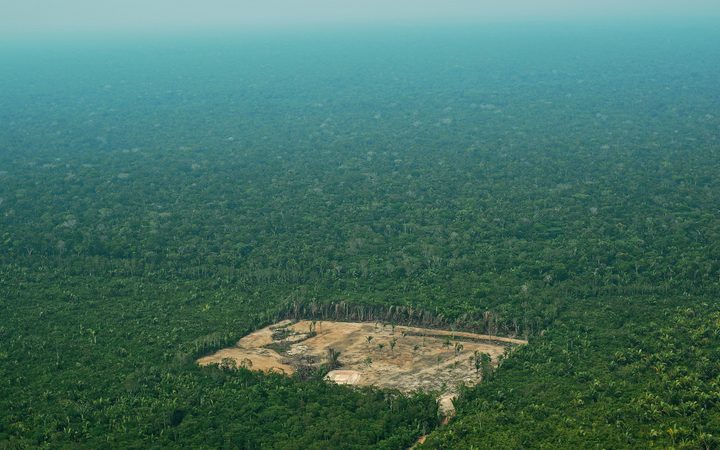 Aerial view of deforestation in the Western Amazon region of Brazil. Photo: AFP

The Living Planet Report from the Worldwide Fund for Nature said the global populations of mammals, reptiles, birds and amphibians have fallen by 60 percent between 1970 and 2014.

The report, published every two years, aims to assess the state of the world's wildlife.

The 2018 edition said only a quarter of the world's land area is now free from the impact of human activity and the proportion will have fallen to just a 10th by 2050.

It said "Earth is losing biodiversity at a rate seen only during mass extinctions."

The report noted that although forest loss has been slowed by reforestation in some regions in recent decades, the loss has "accelerated in tropical forests that contain some of the highest levels of biodiversity on Earth".

Marine freshwater species are particularly at risk, the report said. Plastic pollution has been detected in the deepest parts of the word's oceans, including the bottom of the Mariana Trench in the Pacific.

Freshwater species - living in lakes, rivers and wetlands - have seen an 83 percent decline in numbers since since 1970, according to the report.

The WWF is now calling for "a new global deal for nature and people" similar to the 2015 Paris agreement to tackle climate change by reducing greenhouse gas emissions.

"Decision makers at every level need to make the right political, financial and consumer choices to achieve the vision that humanity and nature thrive in harmony on our only planet, the report said.

The data, gathered from peer-reviewed studies, covers more than 16,700 populations belonging to 4,000 species around the world.

But the methodology has been criticised. One conservationist told the BBC in 2016 that the data in the 2016 report was skewed towards western Europe, where figures were more readily available.

Just as the WWF report was released China has announced a decision to partially reverse a ban on the trade of tiger bones and rhino horn.

Rhinos and tigers are both endangered in the wild and China prohibited their trade in 1993.

In a statement announcing the replacement of the 25-year old ban, China's State Council said powdered forms of rhino horn and bones from dead tigers could be used in "qualified hospitals by qualified doctors".

The animal products can only be obtained from farms, it said.

Parts from those animals classified as "antiques" could be used in cultural exchanges if approved by the cultural authorities, the statement added.

Rhino and tiger parts are highly valued in traditional Chinese medicine. They are prescribed to treat a large variety of ailments including fever, gout, insomnia and meningitis, though any benefits have not been proven.

The World Wildlife Fund said in a statement that the move would have "devastating consequences" and be an "enormous setback" to efforts to protect the animals in the wild.