Forest & Bird is hailing a report published today as a breakthrough for the country's environmental policy. 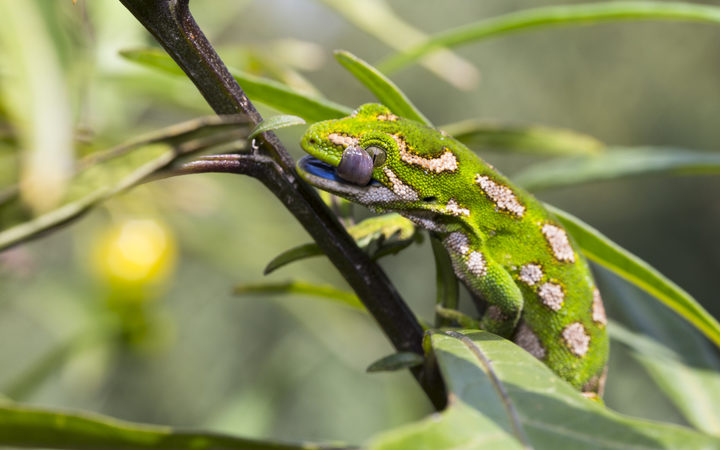 A NZ jewelled gecko. The report said 80 per cent of native birds, 88 per cent of lizards and 100 per cent of frogs were threatened with extinction. Photo: DOC/Sabine Bernert

Setting out 22 recommendations for local councils to follow, it is the first step in creating a National Policy Statement for indigenous biodiversity.

The Biodiversity Collaborative Group (BCG) which published the report is funded by the government and is made up of stakeholders including Forest & Bird, Federated Farmers, Forest Owners Association and the Iwi Chairs Forum.

Forest & Bird lawyer and group trustee Sally Gepp said previous governments had tried to produce such a report but had been unsuccessful.

"There simply hasn't been enough buy-in, and there's been outright hostility and opposition, from a range of groups across the spectrum.

"One of the areas we've been lacking in national direction in is the area of indigenous biodiversity. We're continuing to lose species and species are becoming more threatened as well as eco-systems and habitats."

She said this time was different because the BCG had stakeholders with a range of interests and ideas.

"They've all brought their perspectives to the table and through a stakeholder-led process we've managed not only to arrive at a set of recommendations but actual draft wording for the National Policy Statement itself."

The report has been 18 months in the making.

The main recommendation was on identifying and managing significant natural areas (SNA).

"This really standardises the criteria for identifying what is a significant ecological area and then it also provides a set of principles for how that identification process should occur," Ms Gepp said.

The report states that councils "should seek to engage with landowners and share information about biodiversity values, potential management options, and support and incentives that may be available."

Ms Gepp said the policy would apply regardless of who owned the land.

How it may affect landowners was largely unknown at this stage.

"There are some regions that already have fairly strict rules about vegetation clearance whereas there are others where we're still seeing loss of vegetation, even in highly threatened environments."

"It is important to bring landowners along with the process rather than making them feel alienated and as if something has been imposed on them... I think this policy can endure because people have been considered as part of the equation."

Another recommendation was to involve tangata whenua in regional policy plans.

"Another key aspect of it is the lens through which biodiversity is viewed. The group has tried as much as possible to infuse a Māori world-view through the concept of Hutia Te Rito, which refers to the heart of the flax and that's really about recognising that it's people that are going to make the difference."

It also said where the effects on the environment were unknown or there was little understanding of impact, a precautionary approach must be taken by councils and that councils must consider the effects of climate change.

Biodiversity restoration and protection of wetlands was also covered.

Ms Gepp said councils and community groups were doing good work on their own but unfortunately it had not gone far enough.

"The status quo isn't working. We are still losing biodiversity and we do need a step-change to turn that situation around while there's a lot of good work happening it's not stemming the loss.

"The report will provide guidance to district and regional councils about how they implement that really crucial task of maintaining New Zealand's biodiversity.

"We think the policies we've come up with will affect that step-change.

She said the government would consider the report and the next step would be a government-led public consultation.