The 12 boys who were rescued after a fortnight trapped in flooded caves in Thailand this year were guests as Manchester United beat Everton 2-1 in the English premier League. 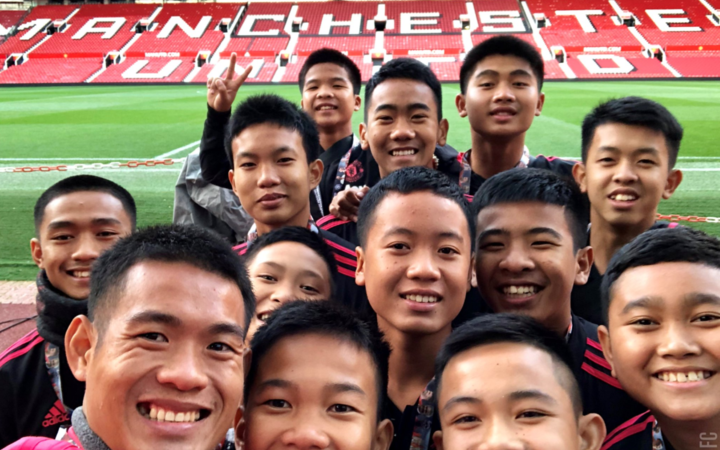 In the aftermath of their extraordinary rescue, offers poured in from around the world to host the boys who had walked into the caves after football practice only to be trapped by rising flood waters.

Their plight gained worldwide attention and in the aftermath the children were invited to a United game by the club's executive vice-chairman Ed Woodward.

The youngsters, all members of the Wild Boars junior football team, were rescued in July by cave divers who managed to drag them out one by one through flooded caves.

The boys had been invited by football's world governing body, FIFA, to go the World Cup in July but they were still weak after the ordeal and needed time to recover.

Since then they have played in Buenos Aires against a junior team during the Youth Olympics and appeared on Ellen, a television talk show with Ellen DeGeneres.

And this weekend they got to watch one of the best known teams in the world.

The boys met Manchester United manager Jose Mourinho, then watched his side beat Everton. They were invited into the dressing rooms to take photos with some of the most famous players at the club and, possibly in world football, including Paul Pogba, the French star.

It’s a pleasure to welcome the young Thai footballers who were rescued from a cave earlier this year. #MUFC pic.twitter.com/tcMVUzUJl6

A moment to savour for today's special guests at Old Trafford.

The young Thai footballers who were rescued from a cave in July met Eric Cantona during our win over Everton - it was a pleasure to welcome them along. pic.twitter.com/nBvYcP0qwe

There was one moment of sadness. The crowd stood silent for a minute following news of a helicopter crash at Leicester City, owned by Thai businessman Vichai Srivaddhanaprabha who died in the crash.