In a race to perfect driverless flying car technology that includes big-name firms Uber and Airbus, Singapore is set to begin test flights in the second half of 2019. 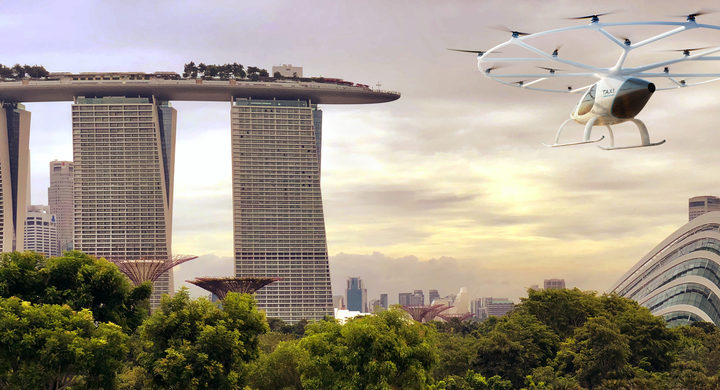 Volocopter, the company behind the Singapore project, said the drone-based vehicles would take to the skies in a series of "inner-urban flight tests" with the support of local authorities.

The German firm has already undertaken a one-off unmanned test in Dubai, and individuals have also flown in it in Germany.

In a statement announcing the next step toward flying passenger vehicles becoming a reality, Volocopter chief executive Florian Reuter described Singapore as a "logical partner" in its efforts.

"The city is a true pioneer in technology and city development," he said.

"We are confident this is another exciting step to make air taxi services a reality."

Tan Kong Hwee, the executive director of Singapore's state-run Economic Development Board, welcomed the "exciting" news in a statement.

Singapore was the first country to begin trialling driverless taxis back in 2016 and last year unveiled plans to introduce "robot buses and shuttles" to commuters starting in 2020, according to local newspaper The Straits Times.

The planned flying car trial aims to determine whether the electric-powered aircraft, which was created with inner-city flight in mind, will live up to its design brief when operating in an urban environment.

Though the prototype resembles a helicopter, its drone-like capabilities means it can be operated from the ground or by a pilot, carrying two passengers for about 30 kilometres.

The announcement comes after aviation giant Airbus completed its first test of the Vahana, a similar electric vertical take-off and landing aircraft, in January.

Taking to the skies for the first time. Photo by @gfwilliams #vtol #verticalaerospace #evtol #aerospaceengineering #aviation

The self-piloted test only lasted for 53 seconds, but Vahana executive Zach Lovering said in a blog post that it marked "a huge milestone for … the global pursuit of air mobility".

Uber has also announced plans to pursue UberAir, which it describes on its dedicated Uber Elevate website as an "urban aviation ridesharing product".

But despite the hype, it remains unclear if any of the plans will come to fruition, with questions remaining over logistics, safety, regulation and how much flights could end up costing.

Uber hopes customers will be able to "push a button and get a flight on demand" in three cities - Los Angeles, Dallas and a third, yet-to-be-named location - as early as 2023, with test flights scheduled for 2020.

The company admits the scheme is "ambitious" but claims that trips using the electric aircraft could be relatively affordable - much less than helicopters and only marginally more expensive than comparable car rides in San Francisco.