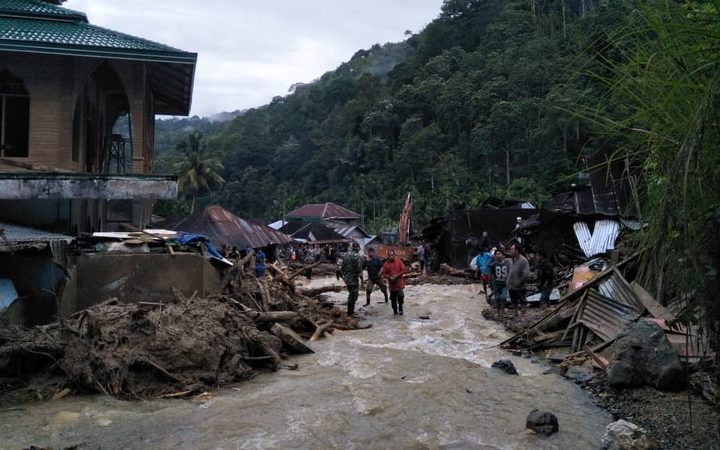 Eleven of the dead were children buried when mud and water engulfed their classroom in the village of Muara Saladi in North Sumatra province.

Another 10 people are missing at the site.

More than 500 homes in the provinces of North and West Sumatra have been damaged.

The deadliest incident was at the Islamic village school in Muara Saladi in Mandailing Natal district, which borders West Sumatra province.

Children were studying on Friday afternoon when a nearby river overflowed and brought down their classroom wall.

"The victims were buried in a torrent of mud and wall debris," said Sutopo Purwo Nugroho, a spokesman for disaster mitigation agency BNPB.

Rescuers found the bodies of 11 children hours later but at least one child is among the 10 missing at the site.

Mr Sutopo said evacuations were under way in many areas but "the affected villages are in the mountains and access is difficult, due to damaged roads".

A week-long emergency relief period has been declared for both North and West Sumatra provinces.

Flash flooding and landslides are not uncommon across the vast Indonesian archipelago.

More than 50 people died in a mudslide on the island of Java in December 2014.

Two weeks ago a massive earthquake and tsunami devastated the Palu region of Sulawesi.