Kanye West has launched into an expletive-filled rant in the Oval Office as he lavished praise on US President Donald Trump. 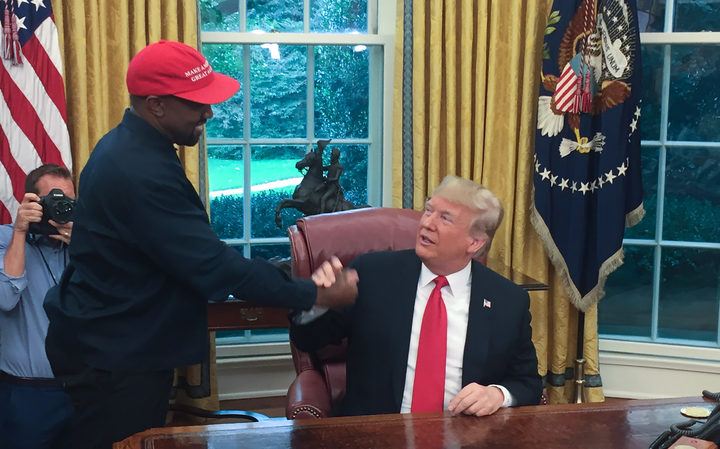 Wearing a Make America Great Again hat "made me feel like Superman", he said.

During the monologue that ranged from prison reform to manufacturing, politics and the universe, West said: "They tried to scare me, my friends to not wear this hat, but this hat, it gives me power in a way.

"You know, my dad and my mum separated, so I didn't have a lot of male energy in my home."

"I love Hillary, I love everyone, right.

"But the campaign, I'm With Her, just didn't make me feel as a guy that didn't get to see my dad all the time, like a guy that could play catch with his son."

"There was something about when I put this hat on it made me feel like Superman," he said, addressing Mr Trump.

In a surreal visit to the White House, Kanye West defends support for Trump, in front of Trump https://t.co/KxSqVC9veN via @ReutersTV pic.twitter.com/i5R3xtEtIR

Kanye West: "I brought a gift with me right here. This right here is the iPlane 1. It's a hydrogen-powered airplane and this is what our president should be flying in."

At the end of the 10-minute monologue, during which Mr Trump had nodded in approval, the president said: "That was quite something."

West replied: "It was from the soul. I just channelled it."

"I love this guy right here," West said, walking behind the desk to hug the seated president, who said: "That's really nice."

West rejected the notion that celebrities must have "a monolithic voice that forced to be for a specific party".

He also denied that all black Americans were Democrats.

"People expect that if you're black, you have to be Democrat," he said.

"If he [President Trump] don't look good, we don't look good," he said at one point, attacking the "liberals" on the Saturday Night Live show who have criticised his support for Mr Trump.

Mr Trump won 8 percent of the African-American vote in 2016.

Mr Trump was asked by a journalist if West could be a future presidential candidate, and the president replied: "Could very well be."

West told reporters: "Let's stop worrying about the future, all we have is today.

"Trump is on his hero's journey right now.

Moving on to the topics of schools, West said: "Sometimes people say, 'This kid has ADD [Attention Deficit Disorder], this kid has ADD.'"

"You don't have ADD, school is boring.

"It is boring, it's not as exciting as this," he said gesturing towards his mobile phone.

West also used the opportunity to applaud Mr Trump's efforts with North Korea and said he liked the country.

"You stopped the war," he told Mr Trump.

West's first visit to Mr Trump was at his eponymous Manhattan skyscraper in 2016, a month after he won the election, but this was the rapper's first trip to the White House. The president asked him what it felt like.

During her first trip there, she successfully argued to have a grandmother's prison sentence commuted by Mr Trump.