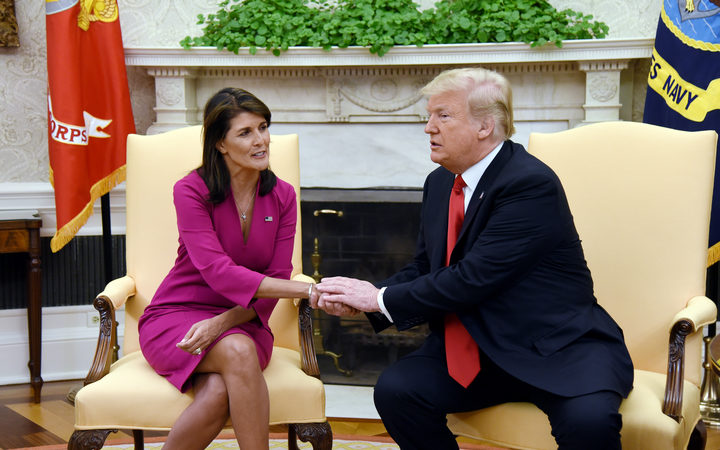 US President Donald Trump shakes hands with Nikki Haley, the United States Ambassador to the United Nations in the Oval office. Photo: AFP

Mr Trump appeared in the Oval Office alongside Mrs Haley to say she had done "an incredible job".

The 46-year-old former South Carolina governor - one of the few women in the Trump cabinet - gave no reason for her exit, but dismissed speculation she was planning to run for president in 2020.

Mr Trump said he would name a replacement in two-three weeks.

He said he would consider the candidature of Dina Powell - his former deputy security council adviser - and added that his daughter Ivanka "would be dynamite" as ambassador, but that he would be accused of nepotism if he chose her.

Hours later, Ivanka ruled herself out of the race.

It is an honor to serve in the White House alongside so many great colleagues and I know that the President will nominate a formidable replacement for Ambassador Haley. That replacement will not be me.

Ambassador Haley has served America with dignity + distinction.
She is a bold reformer and has been an unwavering champion of truth, principled realism and integrity within the United Nations.
Jared and I are grateful for her friendship — a true blessing in our lives! pic.twitter.com/sidkwXzPZB

Mrs Haley did not give details about her move - or what she would do next.

"It's been eight years of intense time, and I'm a believer in term limits," she said referring to her time in public office.

"I don't have anything set on where I'm going to go," she said.

Mrs Haley told journalists she would be campaigning for "this one", pointing to Mr Trump.

Mr Trump said Mrs Haley had told him some time ago she wanted to take some time off.

The president said she "has been very special to me, she has done an incredible job, she is a fantastic person, very importantly, but she is also somebody that gets it".

"Hopefully you'll be coming back at some point, right," Mr Trump said. "Maybe a different capacity, you can have your pick." Mrs Haley laughed.

Citizens for Responsibility and Ethics in Washington said Mrs Haley had undervalued the cost of the flights by tens of thousands of dollars in an annual financial disclosure report.

In April, Mrs Haley clashed with the White House when a Trump aide suggested she had prematurely announced a round of sanctions against Russia.

White House economic adviser Larry Kudlow suggested she had got "ahead of the curve" and had a "momentary confusion".

But she fired back hours later telling Fox News: "With all due respect, I don't get confused."

Mrs Haley was a frequent critic of Mr Trump during his election campaign.

She had said that women who accused him of sexual assault "should be heard".

At one point she suggested that Mr Trump's rhetoric could trigger a world war.

"She challenged friend and foe to be better," retiring Speaker of the House Paul Ryan said.

South Carolina Senator Lindsey Graham said she had been "a true agent of reform" at the UN.

Senator Robert Menendez, the top Democrat on the Senate Foreign Relations Committee, called her departure "yet another sign of the Trump Administration's chaotic foreign policy".

He said he is "deeply concerned about the leadership vacuum she leaves and the national security impact of her departure at this time of continued disarray".