The United States has pulled out of the United Nations Human Rights Council. 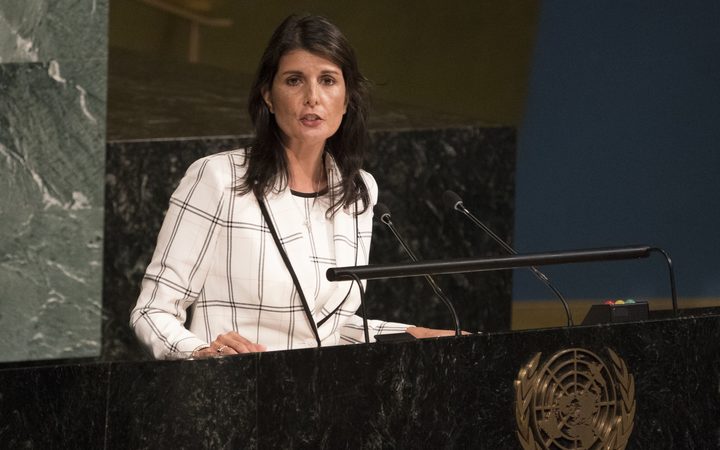 US Ambassador to the United Nations Nikki Haley speaking at the UN. Photo: AFP

The body is "hypocritical and self-serving" and "makes a mockery of human rights", US envoy to the UN Nikki Haley said in an announcement with Secretary of State Mike Pompeo.

She called the council a "cesspool of political bias", but said: "I want to make it crystal clear that this step is not a retreat from our human rights commitments."

Ms Haley last year accused the council of "chronic anti-Israel bias" and said the US was reviewing its membership.

Formed in 2006, the council has been criticised for allowing countries with questionable human rights records to be members.

UN human rights chief Zeid bin Ra'ad said that it was "disappointing if not surprising news".

The move comes amid intense criticism over the Trump administration's policy of separating child migrants from their parents at the US-Mexico border.

"The UN Human Rights Council has played an important role in such countries as North Korea, Syria, Myanmar and South Sudan, but all Trump seems to care about is defending Israel," said HRW executive director Kenneth Roth.

In her first address to the council a year ago, Ms Haley said it was "hard to accept" that resolutions had been passed against Israel yet none had been considered for Venezuela, which at the time saw dozens of protesters killed during political turmoil.

"It is essential that this council address its chronic anti-Israel bias if it is to have any credibility," she said.

Israel is the only country that is subject to a permanent standing agenda item, meaning its treatment of the Palestinians is regularly scrutinised.

Leaving the council would would be the latest rejection by the US of multilateral efforts, including the Paris climate agreement and the Iran nuclear deal.

The Trump administration's decision to withdraw from the UN Human Rights Council is the latest in a series of international bodies or agreements it has pulled out of.

Here's some of them:

What is the UN Human Rights Council?