China is deploying missiles in the disputed South China Sea to intimidate and coerce its neighbours, US Defence Secretary James Mattis says. 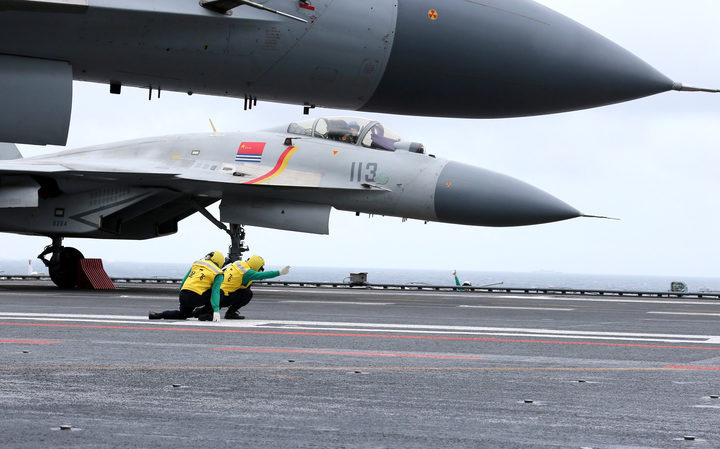 Chinese J-15 fighter jets on the deck of the Liaoning aircraft carrier during military drills in the South China Sea on 2 January 2017. Photo: AFP

He also said the issue of US troops in South Korea was "not on the table" at this month's summit between President Trump and North Korea's Kim Jong-un.

The US wanted complete denuclearisation of the Korean peninsula, he added.

There are currently about 28,500 US troops based in South Korea.

Mr Mattis told the security summit Beijing had deployed military hardware including anti-ship and surface-to-air missiles to locations across the South China Sea.

"Despite China's claims to the contrary, the placement of these weapon systems is tied directly to military use for the purposes of intimidation and coercion," General Mattis said.

General Mattis said the Trump administration wanted a constructive relationship with China but would compete vigorously if necessary.

The US recognised that China had a role to play in the region.

The South China Sea, a key trade route, is subject to overlapping claims by six countries.

China has been building small islands and other maritime features into military facilities there.

Last month China said it had for the first time landed bombers on Woody Island in the Paracel Islands, prompting US warnings that it was destabilising the region.

Woody Island, which China calls Yongxing, is also claimed by Vietnam and Taiwan.