A New Zealand activist in the United States says critics of the newest Supreme Court Justice, Brett Kavanaugh, will rally harder than before as the mid-term elections loom, on 6 November. 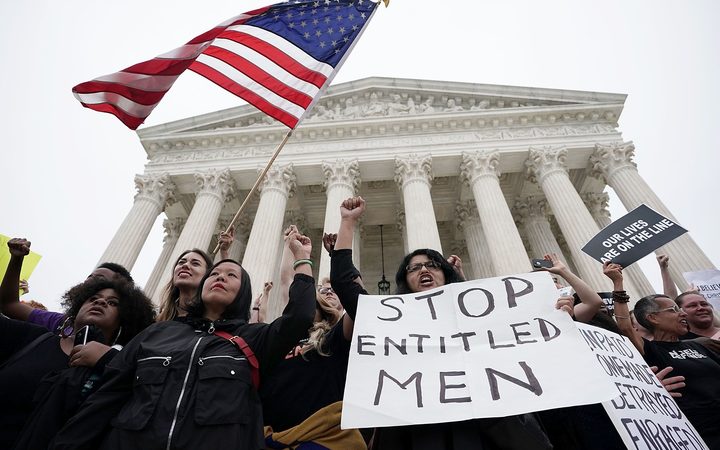 Activists on the front steps of the US Supreme Court to protest against the appointment of Judge Brett Kavanaugh to the Supreme Court. Photo: AFP

Justice Kavanaugh, who three women have accused of sexual assault, was sworn in just hours after the Senate narrowly approved his nomination, 50 votes to 48.

The national coordinator of Aotearoa World Beyond War, Liz Remmerswaal, joined protesters outside the senate in Washington DC this week.

She said people were hopeful to the last minute that Judge Kavanaugh would not be approved.

"It's hugely disappointing ... the fact that a man who many see as completely unfit for this office has been confirmed for a lifetime appointment as a supreme court judge and it's disappointing that people's voices haven't been heard."

The American activist group Code Pink is organising a women's march on the Pentagon for late October, Ms Remmerswaal said.

Linda Sarsour, a leader of the Women's March organization, said it was time to harness women's furor around Mr Kavanaugh to galvanize voters in races that will soon determine which party controls Congress.

"This is not the end," Ms Sarsour said. "I think the rage will be translated into mass voter turnout."

Women's March, which grew out of the massive January 2017 demonstrations protesting Donald Trump's presidency, mobilized thousands of women during Kavanaugh's confirmation process over concerns about how the conservative judge would vote on issues such as abortion, and allegations that he sexually assaulted university professor Christine Blasey Ford when they were teenagers in 1982.

Ms Sarsour said the group will use its vast digital infrastructure to get hundred of thousands of women to support Democrats in dozens of US House of Representatives races and to target incumbent Senate Republicans Ted Cruz in Texas and Dean Heller in Nevada.

Polls show Cruz and Heller, who both voted for Mr Kavanaugh's confirmation, in tight contests. 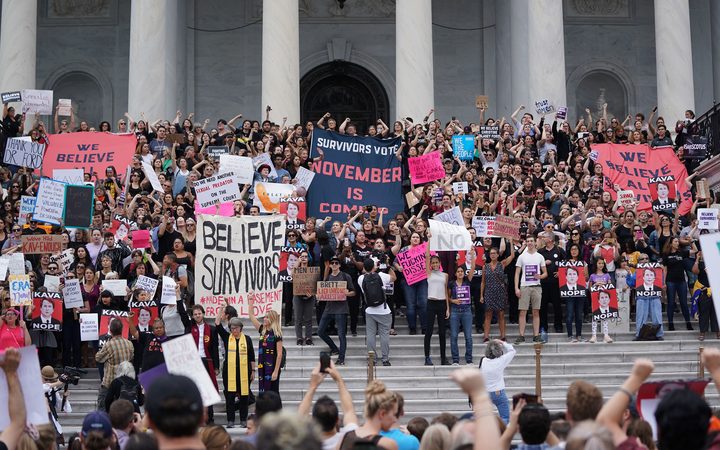 Protesters ahead of a scheduled US Senate vote on the confirmation of Supreme Court nominee Judge Brett Kavanaugh in Washington. Photo: AFP

Women are playing a key role in the first midterm election since Trump's 2016 victory. Fueled by his statements about women and the #MeToo movement, a record number of women are running for Congress this year.

Women who live in suburbs, where some of the most competitive House races will be contested, have trended away from Republicans in recent polls and may be further energized by the Kavanaugh debate.

Activists are also encouraged by the response to a crowdfunding effort focused on Republican Senator Susan Collins, a possible swing vote who ultimately voted for Mr Kavanaugh. More than $3.2 million was pledged to help her future opponent in 2020, when the Maine senator is up for re-election.

"Starting tomorrow, it's not unlikely we ask those 130,000 donors to start to support some of the Senate Democrats in really tough races this year," said Liz Jaff, co-director of Be A Hero, which advocates for healthcare causes.

Conservative groups also vowed to keep the confirmation battle at the forefront of voters' minds.

"Americans saw through the vilification of an exceptionally qualified nominee, and their senators will be held accountable," Marjorie Dannenfelser, president of anti-abortion group, Susan B. Anthony List, said in a statement.