China is attempting to "meddle" in the forthcoming US mid-term elections, President Donald Trump told world leaders during a UN meeting. 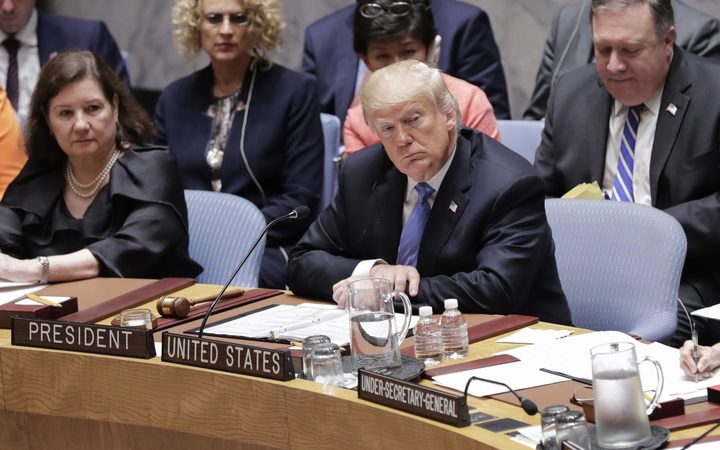 "They don't want me or us to win because I am the first president to ever challenge China on trade," Mr Trump said on Wednesday.

Mr Trump did not offer proof for his claim. China and the US have been in a battle over tariffs since his election.

The US congressional mid-terms are due to be held on 6 November.

"In my remarks yesterday to the United Nations General Assembly, I laid out my administration's commitment to building a more just and peaceful future," Mr Trump said, as he opened a meeting of the UN Security Council in New York.

"Regrettably, we found that China has been attempting to interfere in our upcoming 2018 election, coming up in November, against my administration.

"They do not want me or us to win because I am the first president ever to challenge China on trade. And we are winning on trade, we are winning at every level.

"We don't want them to meddle or interfere in our upcoming election."

The meeting, which Mr Trump chaired, was held to discuss countering nuclear, chemical and biological weapons.

In response, Chinese Foreign Minister Wang Yi told the council that "China has all along followed the principle of non-interference in other countries' domestic affairs."

"We did not and will not interfere in any countries' domestic affairs. We refuse to accept any unwarranted accusations against China."

Mr Trump later tweeted that China placed "propaganda ads" made to look like news articles in an Iowa newspaper.

China is actually placing propaganda ads in the Des Moines Register and other papers, made to look like news. That’s because we are beating them on Trade, opening markets, and the farmers will make a fortune when this is over! pic.twitter.com/ppdvTX7oz1

In an interview last month, US National Security Adviser John Bolton said Russia, North Korea, Iran, and China are all potentially planning to meddle in US elections.

"I can say definitively that it's a sufficient national security concern about Chinese meddling, Iranian meddling and North Korean meddling that we're taking steps to try to prevent it, so it's all four of those countries, really," Mr Bolton told ABC News.

Mr Trump has himself previously claimed on his Twitter feed that China "are actively trying to impact and change our election by attacking our farmers, ranchers and industrial workers because of their loyalty to me".

"China has been taking advantage of the United States on Trade for many years. They also know that I am the one that knows how to stop it," Mr Trump tweeted on 26 September.

US intelligence agencies have concluded that Russia sought to interfere in the 2016 presidential election in order to help Mr Trump's campaign.

Mr Trump has repeatedly downplayed the findings of his own security agencies.

Earlier this month, Mr Trump directed officials to impose tariffs on $200bn (£151bn) in Chinese goods, escalating a dispute over what the US says are China's unfair trade practices, such as state subsidies.

The new duties would add to tariffs the US has already imposed on $50bn in Chinese goods as part of that dispute, as well as tariffs that China levied on $50bn in US goods in retaliation.