Applying foundation, nose contouring and filling in eyebrows are standard practice for many women getting ready to head out. 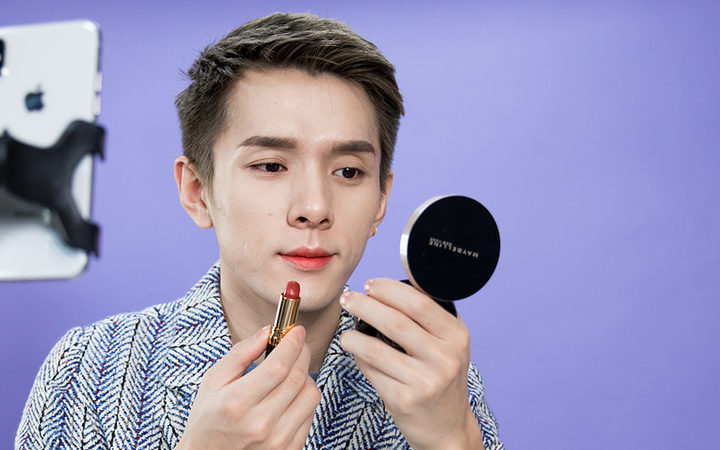 But for many men in China and in other parts of Asia, using cosmetics is part of their routine too.

"I basically wear makeup every time I go out, and buying clothes also makes me happy," Zhang Yangzi, a 22-year-old teacher from Shanghai said.

He spends about a third of his monthly income on his appearance, mainly on clothing and cosmetics.

"Perhaps I feel that makeup will make me more confident, and I think men should polish ourselves better," he said.

Mr Zhang is part of a growing trend in China, where men are displaying a softer form of masculinity, sparked by the rise of effeminate male celebrities in Chinese media and popular culture.

Julia Illera, research consultant at Euromonitor International, anticipated global sales of male beauty products would continue to rise over the next five years, particularly in the Asia Pacific market.

"When looking at regions, Asia-Pacific is the fastest-growing region in men's grooming globally," Ms Illera said.

"Contrary to other regions, where sales of men's grooming is driven by shaving and deodorants, in Asia-Pacific, men's skincare is the largest and fastest-growing category."

Despite the growing popularity of effeminate males in Chinese youth culture, the portrayal of masculinity in Chinese media has received a strong pushback from powerful players in Beijing. 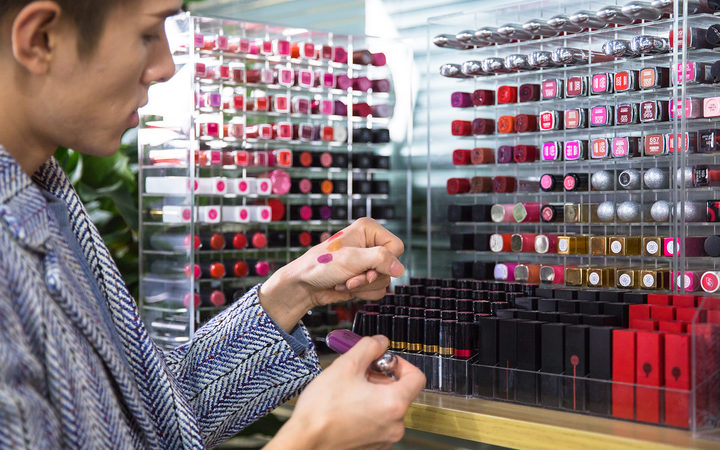 Last week, Chinese state media Xinhua published an editorial slamming the portrayal of men in Chinese media, claiming the popularity of the "sickly aesthetics" in effeminate celebrities was having an adverse impact on teenagers.

Xinhua said that "sissy pants" or "little fresh meats" - who they describe as effeminate young men who use makeup, are slender and wear androgynous clothing - were hurting China's national image.

"In an open and diverse society, aesthetics can be varied, and people can enjoy what they do," Xinhua's editorial said.

"However, everything should have a limit … in this case, it's no longer a matter of aesthetics, but it is an enthusiasm for ugliness and vulgarity.

"The reason why the sissy pants phenomenon arouses public antipathy is that we cannot underestimate the negative impact of this sickly culture on teenagers, who are the future of the country."

The editorial stressed that "what a society's pop culture should embrace, reject and spread is really critical to the future of the country."

The editorial, with its use of strong derogatory terms like "sissy pants", received a mixed reaction on Chinese social media.

"It would be a country's tragedy if the whole society accepted this sissy culture and teenagers started following it. Supporting cultural diversity does not mean that this culture should become part of the mainstream," wrote one Weibo user, DRA Spider.

"It is up to the individual to decide who they want to be. Even if a boy likes to wear makeup and speak softly, it doesn't mean he has no sense of responsibility," posted another user, LiRoFi.

The comments also received strong opposition from another state media, People's Daily - which is often referred to as the China Communist Party mouthpiece - which denounced Xinhua's use of derogatory terms like "sissy pants".

People's Daily said masculinity came from within, citing "courage and responsibility" and the "behaviour of abiding by the law" as more important factors of masculinity. 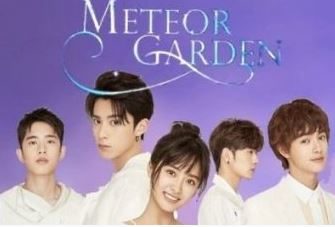 Associate professor at Royal Melbourne Institute of Technology and an expert on China's digital media and popular culture, Dr Haiqing Yu, said while male beauty was still rejected by older generations in other countries, in China there were more political undertones to the issue.

Dr Yu said Xinhua's position suggested many powerful people were not at ease with an effeminate male image as it did not reflect China's "desire to lead, not just to follow".

"China is increasingly flexing its military and economic muscles everywhere to show the rise of China as a really powerful masculine figure, represented by the Chinese President for example," Dr Yu said.

"Beijing sees what's happening in the popular culture scenario with the 'little fresh meat' and they feel that's threatening to the future of Chinese genes and the strength of the Chinese population.

"They are even weaving this narrative that this is one of the strategies of western countries … to destroy the Chinese nation by destroying the younger generations, but I think this is just nonsense."

According to Dr Yu, the modern rise of the "little fresh meat" in China flows from youth culture trends in Japan and South Korea, particularly K-Pop, J-Pop, anime and manga.

"You look at the K-pop stars, those teenage boys, they all look similar and they all wear makeup - it's them who have popularised the male cosmetics industry," Dr Yu said.

In Korea, the boys are known as "flower men" and in Japan they are referred to as Bishōnen, which translates literally to "beautiful youth boy". 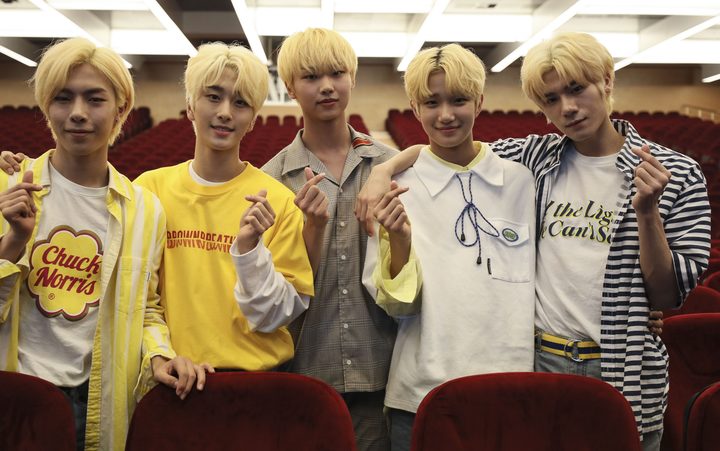 "Skincare regimens in Asia-Pacific are largely being driven by look-conscious consumers and characterised by gender blurriness, with unisex products such as cosmetics, including lip tints, BB/CC creams and mascara in high demand," Ms Illera said.

She added that high levels of social media use and exposure to global grooming styles had led to the dismantling of "boundaries between male and female beauty."

Dr Yu said the marketing push from western brands, such as L'Oreal and Nivea, and Asian-based products, such as South Korea's Laneige, has been key to the wider adoption of male beauty in China.

"China's market is huge, particularly the male one," she said.

"Foreign brands are thinking that if just 2/10 males use the product, then that will be a huge amount of sales."

Ms Illera said this was part of a worldwide trend in the industry, with brands starting to target products to the male market.

Dr Yu also pointed to the wider desire for self-expression in Chinese youth culture, particularly the push for greater gender equality and a fight for lesbina, gay, bisexual and transgender (LGBT) rights, as a factor in the development of the male image.

Beijing has been strict against LGBT content in the media, controversially censoring Ireland's gay love song during the Eurovision 2018 broadcast and attempting to censor LGBT content on social media sites.

"More visibility of LGBT people from the screen to social media has played a role in disrupting traditional gender roles," Dr Yu said.

"It has happened in the west and also happened in China despite the strict censorship environment." 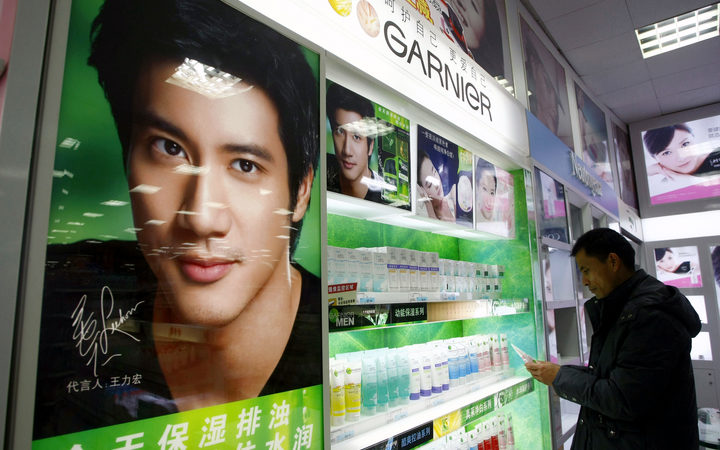 The market for cosmetics for men in China is growing rapidly. Photo: AFP/ Weng lei - Imaginechina

Despite the attempts to control the image of young Chinese males, Mr Wong said there is more than enough space in the Chinese market for many portrayals of masculinity.

"China is a huge country, with all sorts of people. Different people appeal to different audiences - I think the market is big enough for all types of male artists, younger ones, older ones," Mr Wong said.

Mr Zhang said the government should stop trying to manipulate the image of its citizens.

"Everyone has the right to wear makeup or not to do so," Mr Zhang said.

"You have the right to do anything, but you really have no right to impose your value on others."