Police have been deployed to quell tensions after the second death of a German man in east Germany within a fortnight, both allegedly involving confrontations with immigrants. 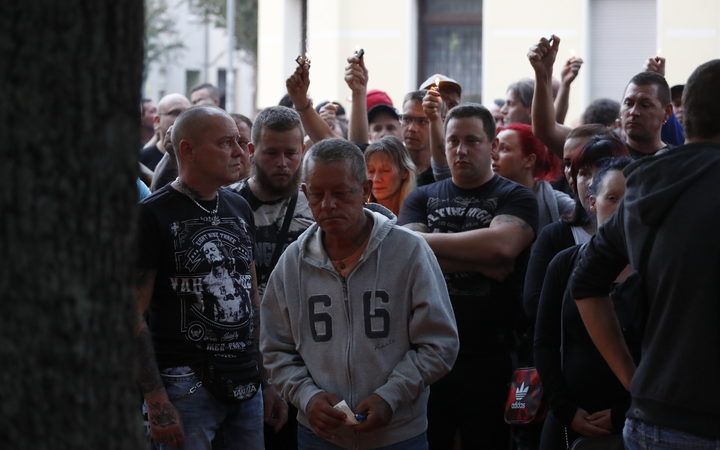 People with lighters attend a march in Köthen, eastern Germany, to mourn the death of a German man after he was involved in an alleged fight. Photo: AFP

Far-right and opposition anti-fascist crowds have taken part in protests in Köthen in eastern Germany, where a German man earlier died following an alleged fight with Afghan men.

Police were deployed to help prevent violent clashes and the city's mayor had advised residents to stay at home.

The 22-year-old fight victim was said to have died of a heart problem not directly linked to his head injuries sustained in the incident.

Two Afghan suspects have been arrested.

Prosecutors said that a post-mortem examination suggested the victim, who reportedly intervened in an argument involving three Afghan men and a pregnant woman, did not die directly as result of the injuries he suffered when he fell and hit his head during the fight.

A crowd marched through the city on Sunday and lit candles as a tribute the victim.

A local pastor, Martin Olejnicki, said that every effort now had to be made to ease tensions, adding that the church would pray every day "for the victim, his family members and peace in the city".

"It is always a kind of danger - we just had Chemnitz - and so things could escalate and I believe nobody wants that," he said. "That's why we are trying to appease all sides and to talk to people and tell them that it's not the moment to let things escalate."

Earlier, neo-Nazi groups took to social media to call for protests in Köthen, which is about 160km north of Chemnitz, where a similar incident sparked violent protests two weeks ago.

German media quote eyewitnesses as saying the fight in Köthen broke out in a playground when the man and his brother got involved in an argument.

"Two Afghans were provisionally detained on suspicion of homicide," police said on Sunday.

In Chemnitz a Syrian and an Iraqi were arrested after a 35-year-old German man was stabbed to death in a fight on 26 August.

The incident led to clashes between far-right and anti-Nazi protesters and assaults on foreign-looking passers-by.

Chancellor Angela Merkel has warned that "vigilante justice" would not be tolerated.

In 2015, Chancellor Merkel decided to let in a record 890,000 asylum seekers. Syrians fleeing the civil war comprised the biggest group - a 403 per cent rise on Syrian arrivals the previous year, the German migration office reported.

She and her allies were punished by voters at last year's general election, when the anti-immigrant Alternative for Germany (AfD) entered parliament for the first time, winning 12.6 percent and more than 90 seats.

Köthen is located in Saxony-Anhalt and Chemnitz in Saxony, two states where AfD is particularly strong.