Two Russian nationals have been named as suspects in the attempted murder of former Russian spy Sergei Skripal and his daughter Yulia. 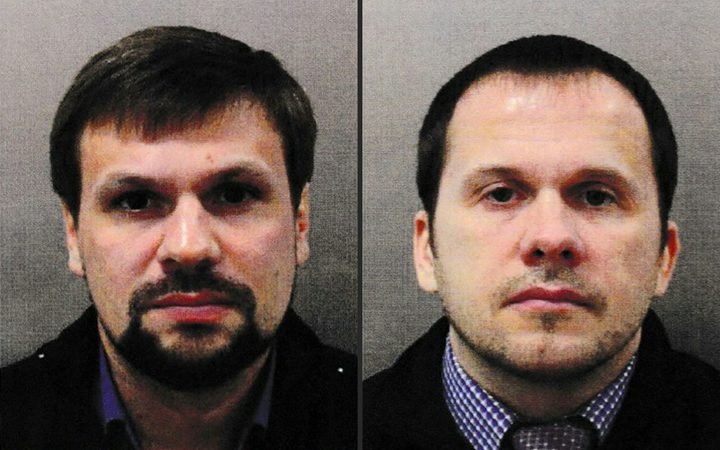 Scotland Yard and the Crown Prosecution Service (CPS) say there is enough evidence to charge the men.

UK Prime Minister Theresa May said the men, using the names Alexander Petrov and Ruslan Boshirov, were thought to be officers from Russia's military intelligence service.

They are thought to have been using the names as aliases and are about 40.

Mr Skripal, 66, and his daughter Yulia, 33, were poisoned with nerve agent Novichok in March.

Police are linking the poisoning to an attack on 30 June, when Dawn Sturgess and Charlie Rowley fell ill at a house in Amesbury, about eight miles from Salisbury. Ms Sturgess died in hospital on 9 July. Mr Rowley was discharged from hospital on 20 July. 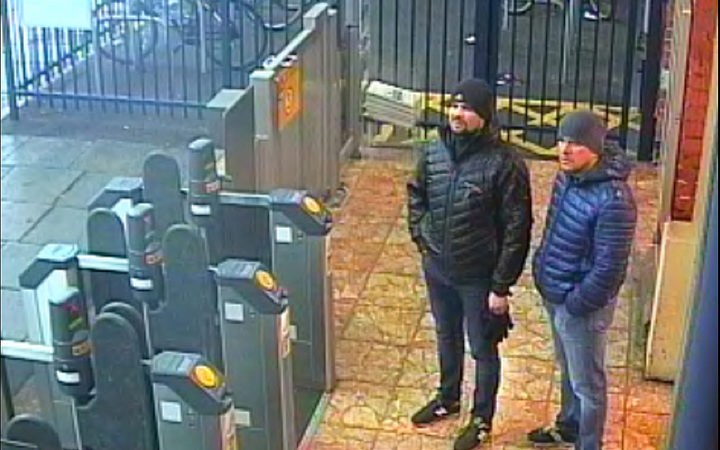 Speaking in the UK parliament, Mrs May said the government had concluded, from intelligence provided by UK agencies, that the men were part of the GRU intelligence service.

The poisoning was "not a rogue operation" and was "almost certainly" approved at a senior level of the Russian state, she said.

Responding in a statement, Russia's London embassy called on the British government to "give up politicised public accusations".

The Russian foreign ministry said the names and photographs of the men "do not mean anything to Moscow".

The CPS is not applying to Russia for the extradition of the two men, as Russia does not have extradition agreements with the UK. A European arrest warrant has been obtained in case they travel to the EU, however.

Sue Hemming, CPS director of legal services, said there was enough evidence "to provide a realistic prospect of conviction" and that it was "clearly in the public interest to charge Alexander Petrov and Ruslan Boshirov".

New Zealand's Foreign Minister Winston Peters says New Zealand welcomed the progress the UK has made in identifying the suspects in the case.

Mr Peters said it was right to wait for the investigation to be completed before drawing conclusions about who may have been responsible.

He said New Zealand would continue to work with the Organisation for the Prohibition of Chemical Weapons and other countries to strengthen the ban on chemical weapons.

The Metropolitan Police said the two men arrived at Gatwick Airport from Moscow on 2 March and stayed at the City Stay Hotel in Bow Road, east London.

From there, they travelled to Salisbury on 4 March where Mr Skripal's front door was contaminated with Novichok.

Officers believe a perfume bottle was used to spray the door.

There is no risk to other guests staying at the hotel at the time, police said.

Mr Rowley has told police he found the box containing the small bottle and an applicator in a charity bin.

Mr Basu said: "We don't yet know where the suspects disposed of the Novichok they used to attack the door, where Dawn and Charlie got the bottle that poisoned them, or if it is the same bottle used in both poisonings."

But he added that "the manner in which the bottle and packaging has been adapted makes it a perfect cover for smuggling the weapon into the country, and a perfect delivery method for the attack against the Skripal's front door".

But Mr Basu confirmed that the two cases were related, saying: "We have now linked the attack on the Skripals and the events in Amesbury which affected Dawn Sturgess and Charlie Rowley.

"It now forms one investigation. We do not believe Dawn and Charlie were deliberately targeted, but became victims as a result of the recklessness in which such a toxic nerve agent was disposed of."