A powerful typhoon killed 10 people in Japan and an airport company transferred some 3000 stranded passengers by boats from a flooded airport, the Japanese government says. 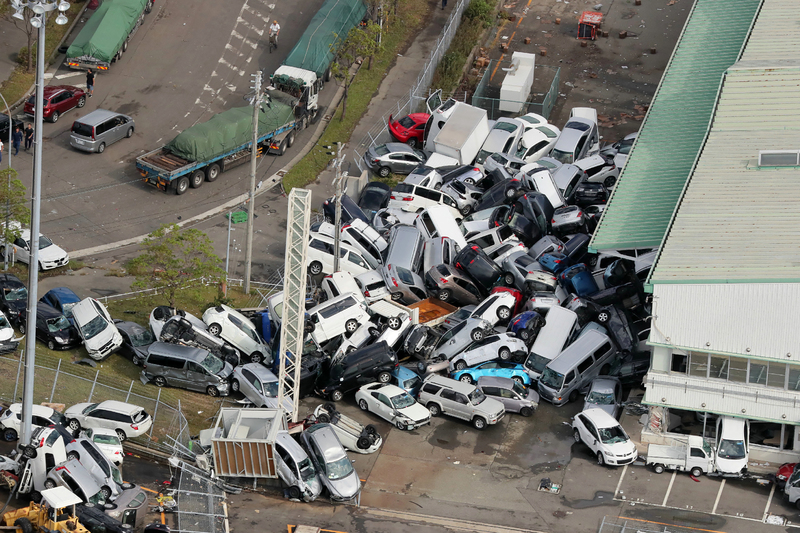 An aerial view from a Jiji Press helicopter shows vehicles piled in a heap due to strong winds in Kobe. AFP/JIJI PRESS 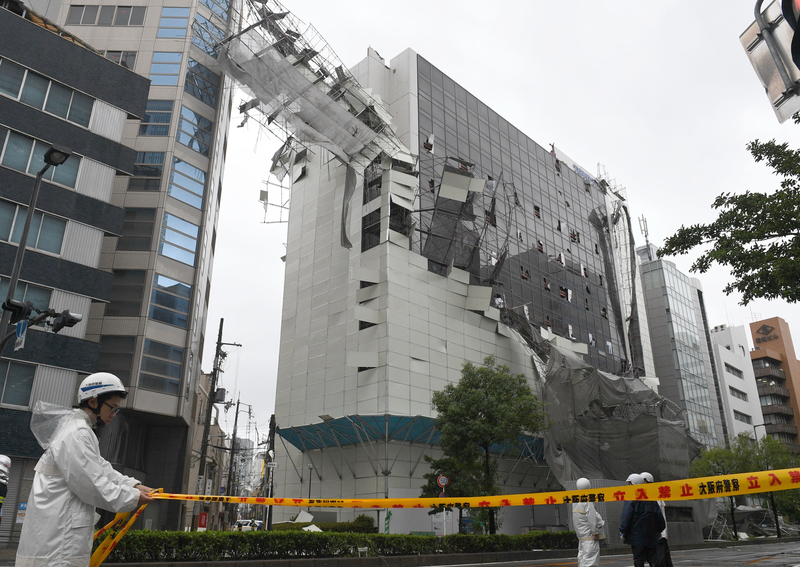 Damaged walls at construction site due to a strong wind triggered by Jebi. AFP 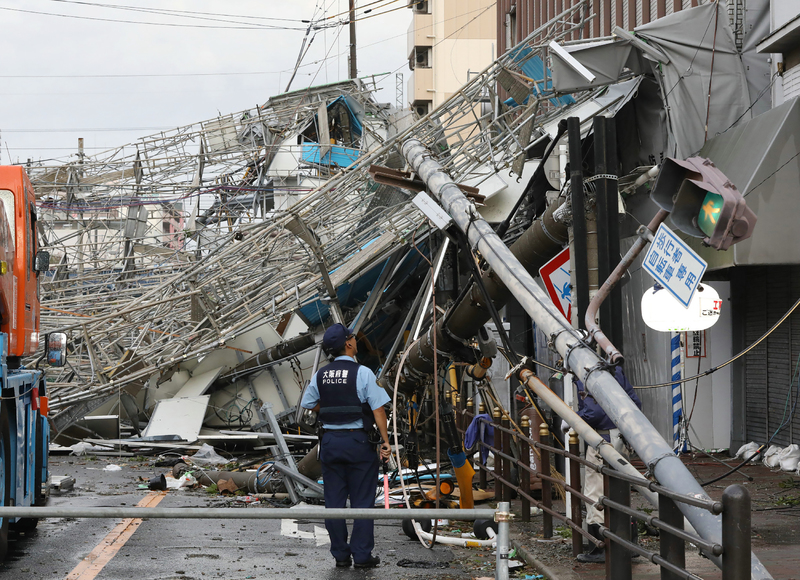 Damaged traffic boards and telecommunication relay poles are seen after they were brought down by strong winds. AFP/JIJI PRESS 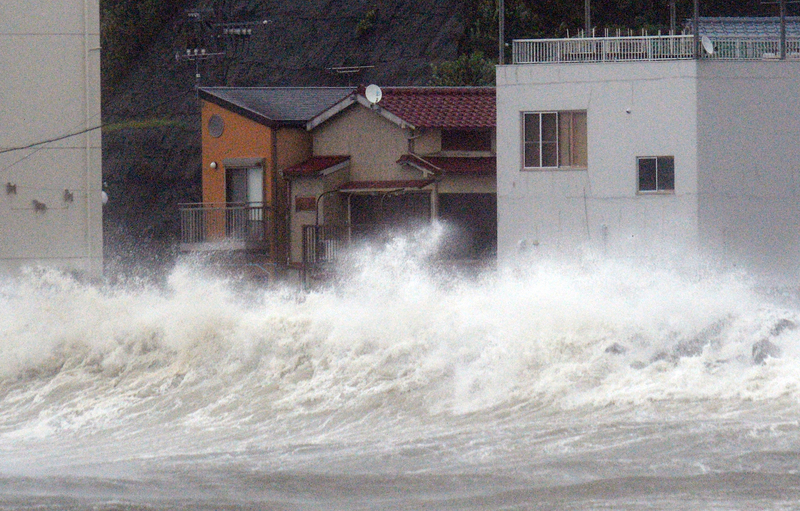 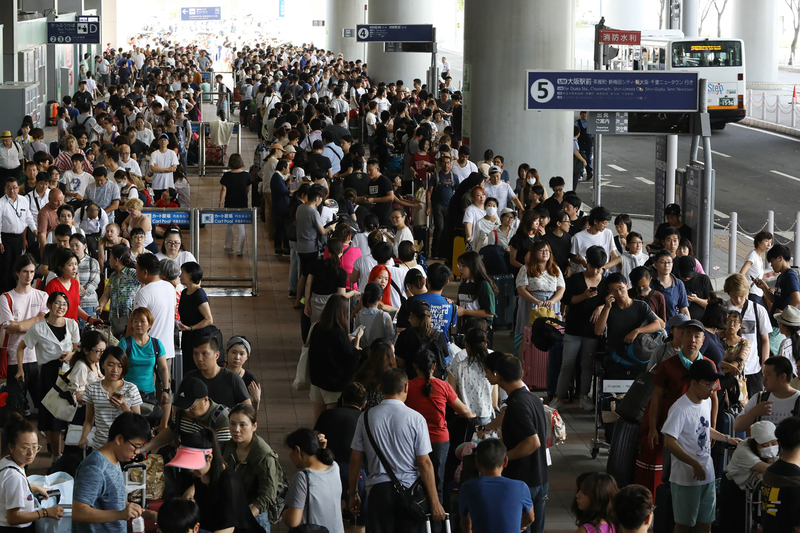 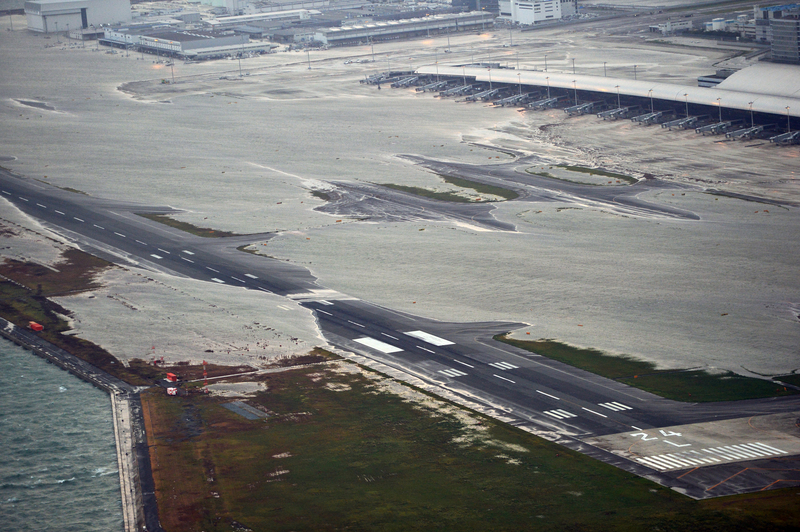 Kansai International Airport covered with water due to the typhoon Jebi. AFP 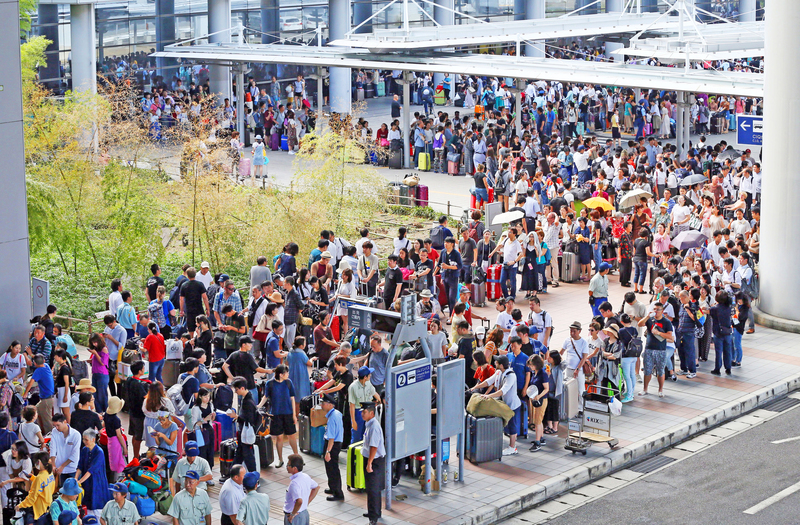 Passengers who sat up all night at Kansai International Airport wait to go on board a bus. AFP/Yomiuri Shimbun 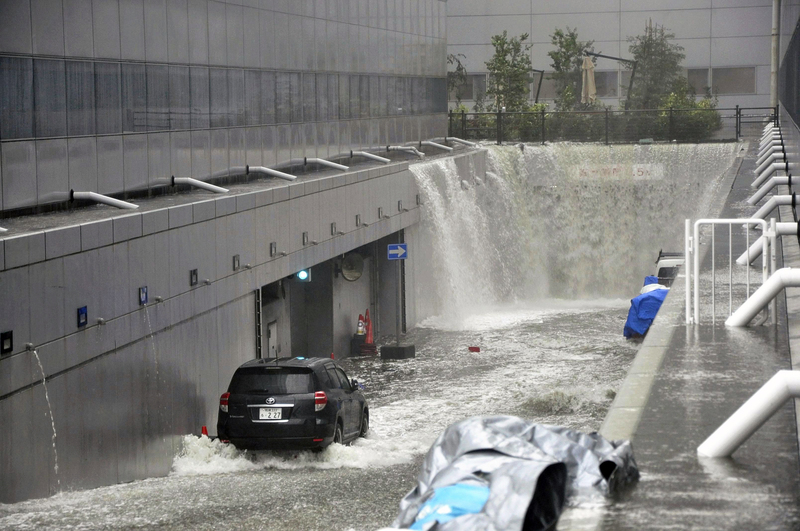 Water of high waves due to Tyhoon Jebi flood into the building at Kansai International Airport. AFP 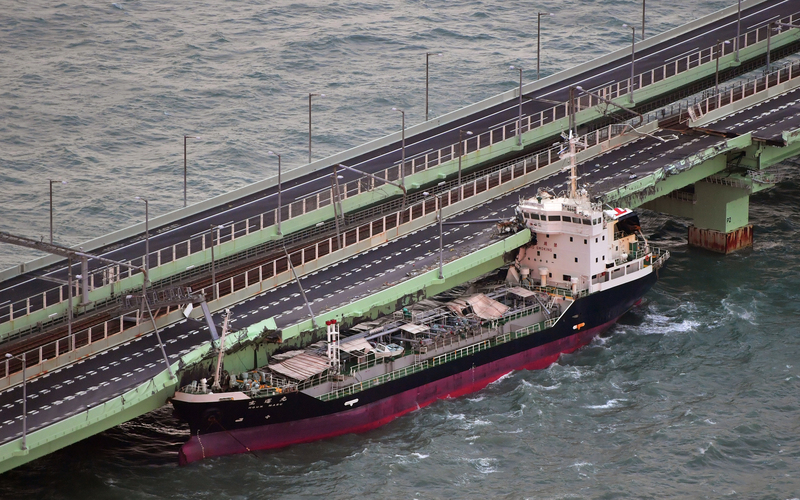 A tanker crashed into the bridge between Kansai International Airport and the main land due to the strong wind of typhoon Jebi. AFP 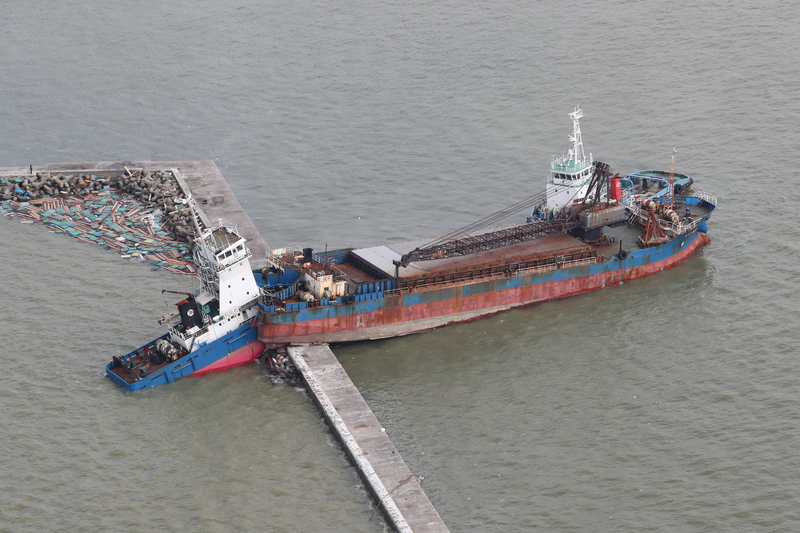 A vessel aground on a breakwater due to strong wind by typhoon Jebi in Nishinomiya. AFP/Yomiuri Shimbun 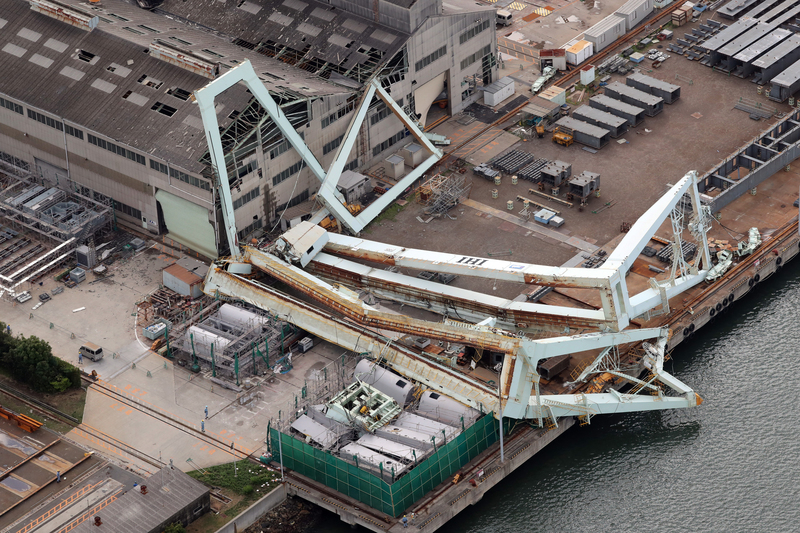 Cranes lying down due to the strong wind caused by typhoon Jebi in Izumisakai. AFP/Yomiuri Shimbun 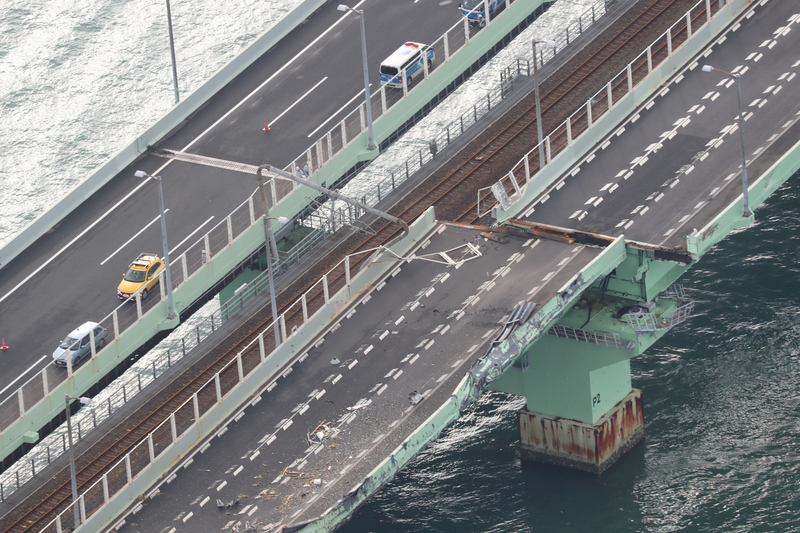 A connecting bridge between the Kansai International Airport and the main land damaged by the typhoon Jebi. AFP/Yomiuri Shimbun 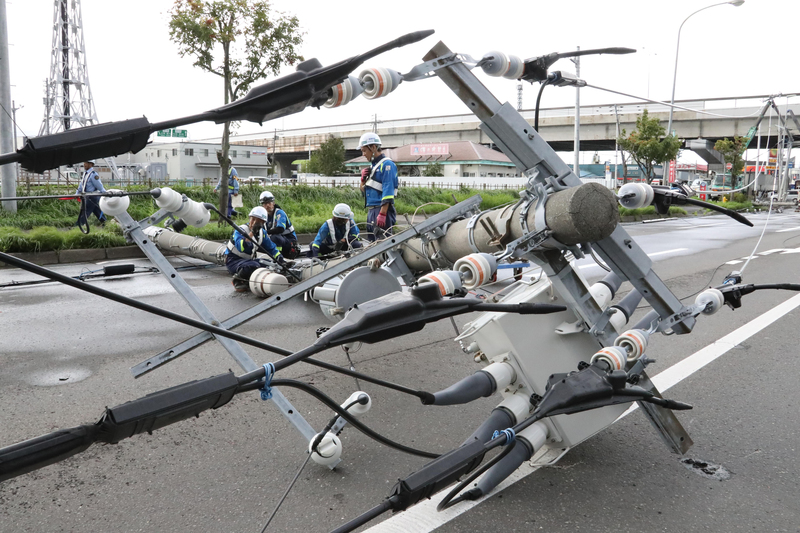 An electric pole collapsed from its root due to the strong wind of the typhoon Jebi. AFP/Yomiuri Shimbun 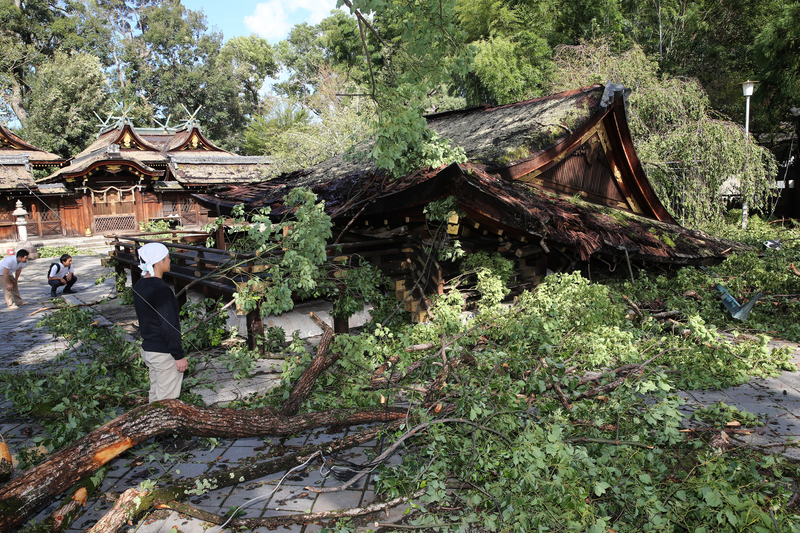 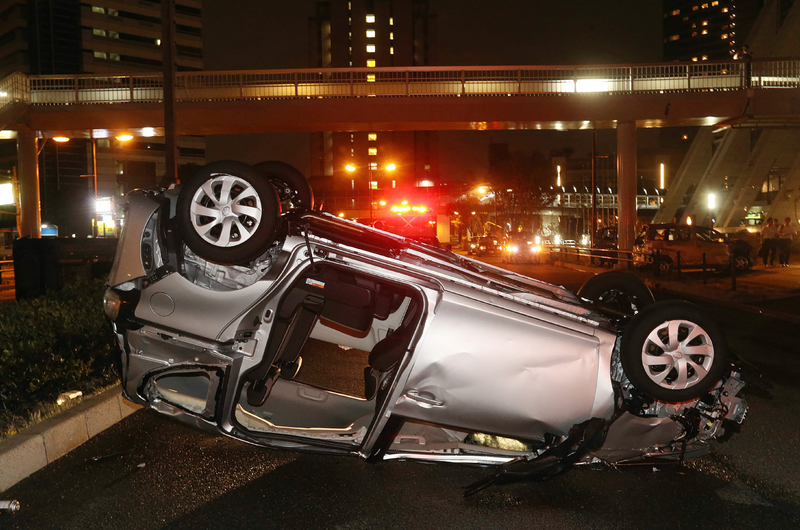 A car lies upside-down along a road after being blown by typhoon Jebi's strong winds in Osaka. AFP

More than two million households experienced blackouts during the storm and schools and companies in the affected area remained shut as typhoon Jebi hit the country.

Jebi, or "swallow" in Korean, was briefly a super typhoon and is the most powerful storm to hit Japan in 25 years.

More than 30,000 people were given stronger but still not mandatory evacuation orders, the Fire and Disaster Management Agency said.

As the winds slow down and move north, people are being urged to stay alert for landslides and floods.

It follows heavy rains, landslides, floods and record-breaking heat that killed hundreds of people this summer.

Nearly 800 flights were cancelled, including international flights at Nagoya and Osaka.

About 3000 tourists stayed overnight at Kansai Airport, an important hub for Japanese companies to export semiconductors.

Television footage showed people lining up to buy food and drinks at a convenience store in the airport.

Airport officials began transferring the stranded passengers to nearby Kobe airport by high-speed boats and buses, the government said.

It was uncertain when the airport would reopen and some roads and train lines in the affected areas were still closed, he said.

"The government will continue to do everything possible to tackle these issues with utmost urgency," Mr Suga said.

It could take several days to a week to reopen Kansai airport depending on the damage, the Yomiuri newspaper quoted an unidentified person in the airline industry as saying.

Footage on social media showed the 100m-tall ferris wheel in Osaka spinning rapidly in the storm despite being switched off.

Japan's JXTG Nippon Oil & Energy Corp shut at least one of the refining units at Sakai refinery in Osaka due to typhoon damage to part of the cooling tower, the trade ministry said.

Toshiba Memory, the world's second-largest maker of flash memory chips, was monitoring developments closely and may need to ship products from other airports if Kansai remains closed, a spokeswoman said.

She said the company was not expecting a major impact because its plant in central Japan had not been affected by the typhoon.

Jebi's course brought it close to parts of western Japan hit by rains and flooding that killed more than 200 people in July but most of the damage this time appeared to be from the wind.