Pope Francis told political leaders and dignitaries at a state welcome in Ireland that he is ashamed of the Catholic Church's failure to adequately address the "repellent crimes" of sex abuse by clergy. 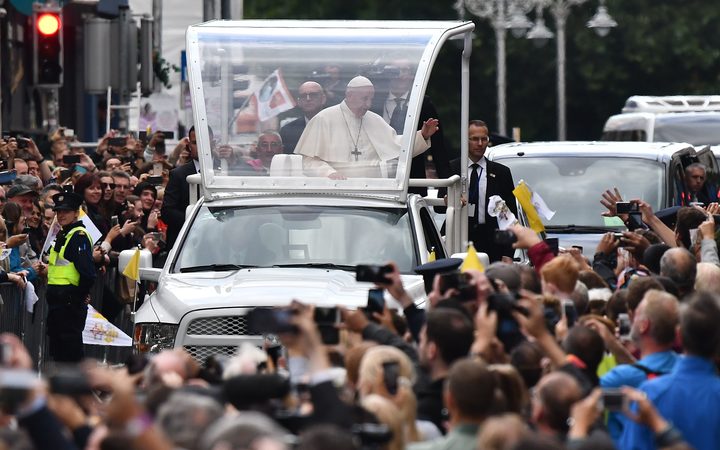 Pope Francis waves to the faithful on his popemobile in Dublin on August 25, 2018, during his visit to Ireland to attend the 2018 World Meeting of Families. Photo: AFP

The Irish prime minister earlier delivered a strong warning to the Pope to take action against clergy involved in child abuse and keeping it secret.

The papal visit, the first to the Irish Republic for 39 years, coincides with the World Meeting of Families, a global Catholic gathering held every three years.

The Argentine Pope's opening remarks echoed a he sent to the world's 1.2billion Roman Catholics this week, in which he condemned the "atrocities" of child abuse and clerical cover-ups.

"I cannot fail to acknowledge the grave scandal caused in Ireland by the abuse of young people by members of the Church charged with responsibility for their protection and education," the Pope told political leaders and dignitaries at Dublin Castle.

"The failure of ecclesiastical authorities - bishops, religious superiors, priests and others - adequately to address these repellent crimes has rightly given rise to outrage, and remains a source of pain and shame for the Catholic community," he said.

The Pope veered off his script when speaking out about abuse, saying he had set out a "greater commitment to eliminating this scourge in the Church, at any cost".

He was speaking after Irish PM Leo Varadkar said the failures of the Church, the state and wider society had created a "bitter and broken heritage for so many, leaving a legacy of pain and suffering".

"Magdalene Laundries, mother-and-baby homes, industrial schools, illegal adoptions and clerical child abuse are stains on our state, our society and also the Catholic Church," he said, referring to a series of scandals that have rocked the Irish Church.

"People kept in dark corners, behind closed doors, cries for help that went unheard... Above all, Holy Father, I ask to you to listen to the victims and survivors." 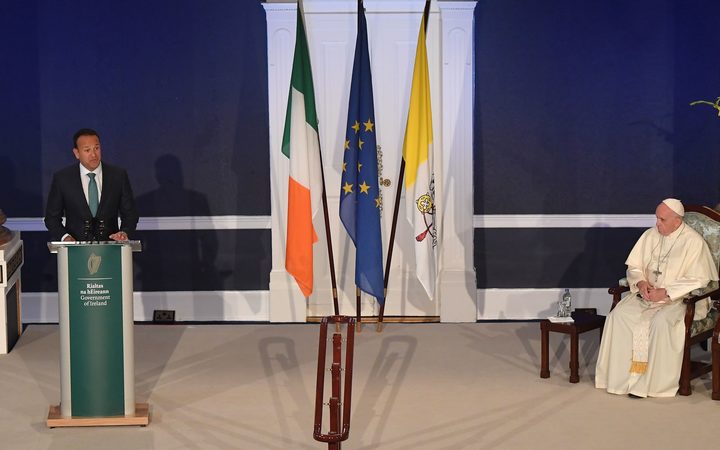 Mr Varadkar said there could be zero tolerance for those who abuse children or who facilitate that abuse and that from words action must flow.

He referred to an investigation in the US state of Pennsylvania that found that more than 1,000 identifiable minors had been abused by 300 priests.

Mr Varadkar said the "heartbreaking stories" of "unspeakable crimes", perpetrated by religious officials and then obscured to protect the institutions, was a story "all too tragically familiar" to people in Ireland.

Colm O'Gorman of Amnesty International Ireland, who was abused by a priest for more than two years as a teenager, said the Pope's comments did not go far enough.

"He could have talked to us all in a way that was blunt, that was clear, that was frank, that was human, that was accessible," he said.

Savia, a group of survivors and victims of institutional abuse, set up a protest outside Dublin Castle, on the route of the popemobile.

They set children's shoes on the pavement, each representing a child who had been abused by priests.

Later, at St Mary's Pro Cathedral in Dublin, he held a silent prayer in front of a candle that commemorates abuse victims, before answering questions from couples of all ages on the subject of marriage.

The Pope's visit will end with a Mass for 500,000 people at Phoenix Park on Sunday.

Having been presented with flowers and vestments by children after his aeroplane Shepherd One touched down at Dublin Airport, Pope Francis was welcomed to the country by President Michael D Higgins at Áras an Uachtaráin (the president's residence).

The Ireland that he is visiting is a different country to that which greeted Pope John Paul II in 1979.

Since the Polish pope's visit, there have been huge changes in public attitudes to social issues including abortion, contraception, divorce and same-sex marriage.

The country voted for constitutional change on gay marriage in 2015 and voted overwhelmingly to overturn its strict abortion law in May.

The Pope heard Mr Varadkar, a gay man, speak out against the traditional Catholic teaching on the family.

He said that the Republic of Ireland had modernised its laws, "understanding that marriages do not always work, that women should make their own decisions and that families come in many forms" - including those headed by a lone parent, same-sex parents or parents who are divorced and remarried.

On Friday, Mr Varadkar said he hoped the Pope's visit would mark the beginning of a new chapter in Ireland's relationship with the Church, which he said had held "too much of a dominant place in our society".