The former US Army soldier who in 2013 was sentenced to 35 years in prison for leaking classified documents to Wikileaks in 2010 says it's been difficult to adjust to life outside prison. 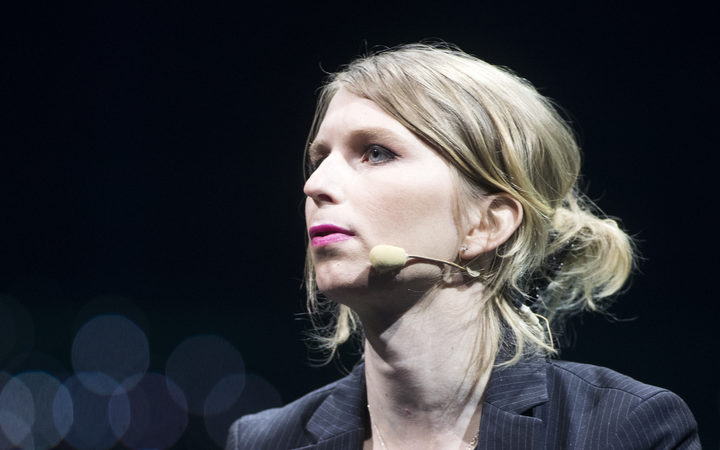 Chelsea Manning spent seven years in prison for revealing military secrets before former US President Barack Obama commuted her sentence and she was released last year.

Ms Manning, who transitioned from male to female while in prison, told Kim Hill, for all that she has gone through, the most pivotal moment of her life happened in November 2008, when the referendum to reverse marriage equality in the state of California, Proposition 8, passed.

"It was shocking and it was earth-shattering for me because in effect, this is a system that allows 52 percent of voters in the state of California to divorce, involuntarily divorce, 11,000 people."

The reversal impacted her understanding of the world and her place in it, she said.

"I've been living as a queer and trans person for many years, first as openly queer and later as trans and that's who I am, and that's been a very common denominator in the struggles that I've had throughout my life.

"I've been homeless, I was really driven into the military in part because of the life struggles I was going through but because I wanted to get rid of my transness...to be this more 'manly man', to meet the masculine expectations.

"When you're living this life, everything is a struggle."

She said she's now fighting to grapple with past struggles such as having to survive school, early adulthood, being homeless, going into the military, going to Iraq and then to prison where she was in solitary confinement, on top of seeking access adequate medical treatment as a trans person in prison.

"No single moment or decision defines me in that way."

Entering the military in 2007, she was apathetic and didn't really have an opinion on politics.

This time period was one of realisation and coming to grips with a more ethical, complex and human understanding of the world, she said.

She was deployed to Iraq in 2009 where she went on to access and share almost 750,000 pieces of classified or non-classified but sensitive military and diplomatic documents.

There was no way to internally address her concerns with the US military's presence in Iraq, she said.

"A lot of people outside of government and the military don't realise this but the official channels, the proper channels if you will, are actually a weapon, they are tools that are used against you. There's actually a programme called the Insider Threat Programme.

"If you raise suspicions or you raise doubts or you raise concerns about something, you are automatically flagged for investigation by the Insider Threat Programme and that can bring administrative measures, it can bring you administrative scrutiny, it can mean surveillance by counter intelligence, it can mean being fired or being moved to a different position where you don't have access to things," she said.

"The official channels are the most dangerous that you can go to."

After struggling to find an outlet to go through, despite reaching out to big media outlets, she released the documents through Wikileaks, which was in a very embryonic state, she said.

"There was a technology barrier that I think is important, this was 2010, there wasn't a significant understanding of encryption and the importance of protecting your digital data and how vulnerable plain text communications actually are.

"I made the decision that I made at the time based on the very limited tools that I had and also the timeframe that I had, I was running out of time."

Initially set to lead to a life in prison, Ms Manning's sentence was reduced by President Barack Obama in May 2017.

While she had written a letter to Mr Obama, she said she doesn't want to believe her release was a political move.

"Any president is obviously concerned with their legacy in their last days in office but I want to believe that wasn't the case here." 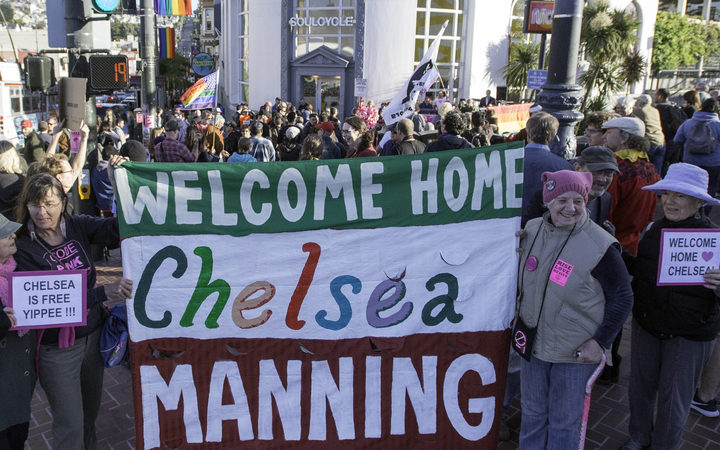 People cheer and hold up signs showing support for Chelsea Manning in the Castro District of San Francisco, California in 2017, during a celebration for her release. Photo: AFP

Ms Manning said it has been a major adjustment and change to be suddenly released after spending so long in prison.

"When you're in prison for a long time - and I've spent most of my adult life in prison, I'm more used to prison than I am the outside world here, this is more of a new experience for me, being out here - it's actually scary because you're really being uprooted in your entire understanding of the world, after being in prison for seven years, I was institutionalised."

"By seven years in, you kind of know that you're going to be in prison for a long time and you just adjust to that...you don't think miracles are going to happen."

Spending a few weeks in the countryside and then few months in New York City when she was released, her understanding of the world outside of prison was shaped during this time.

"I see many of the same things that you would see in prison, constant policing over minor rules, a brutal and violent police state, surveillance everywhere, cameras everywhere, these are the hallmarks of prison but they're also normal out here."

She said many of her fears going into prison, that the US would eventually go down this path, have largely happened.

"We largely live in a domestic military occupation in the United States...

"We brought a lot of these lessons back, in my opinion, from Iraq and Afghanistan where we bought this counter insurgency mentality into our own streets."

Ms Manning said despite being an anti-US military and pro LGBTI rights figurehead, there are much broader issues that interest her, including healthcare and immigration.

"It's really important that we talk about, and really move what people call these 'fringe issues' in to the foray, into the mainstream, because they're not fringe if you're actually talking about them."

She described the agencies as effectively conducting "an act of ethnic cleansing."

Recently she's been dealing with a lot in part because of this new world, she said.

"I'm not ashamed of that or afraid to talk about it."

Her release also brought about an on-slaught of attention and a celebrity status she isn't used to and has received numerous awards for her role in the leaks.

"As long as I do have a platform, I want to use it for the right reasons."

Ms Manning is coming to New Zealand to speak in Auckland on 8 September, and Wellington on 9 September