The Australian government has adjourned a sitting of parliament as it moves to resolve a leadership crisis that has crippled PM Malcolm Turnbull. 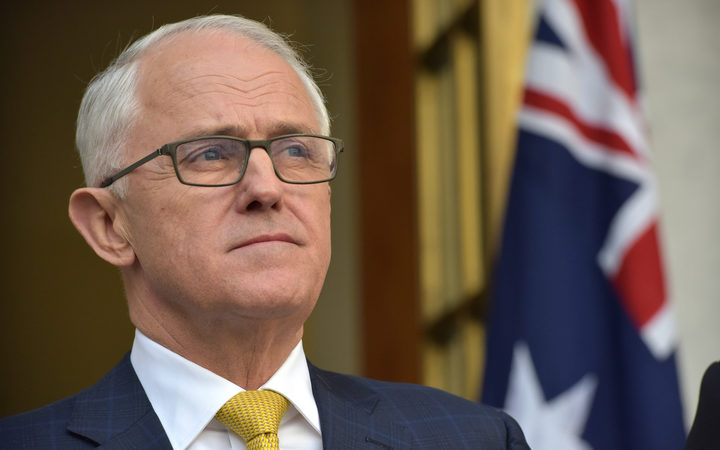 Mr Turnbull is fighting to retain his position amid a push by senior colleagues to replace him as leader.

He has been under growing pressure over poor polling and a revolt by the conservative wing of his party.

Labor Leader of the Opposition Bill Shorten said the country "no longer has a functioning government".

"The government may adjourn the parliament, but they cannot outrun the weight of failure of this government," he said in parliament.

There were jeers of "you're a disgrace" from the opposition benches as the House of Representatives voted 70-68 to suspend parliament until 10 September.

The adjournment was a widely unexpected outcome of several days of upheaval in Canberra.

Amid a fast-moving crisis, Mr Turnbull was facing a demand by party rival Peter Dutton to hold a second leadership contest in three days.

Mr Turnbull told a news conference he has asked for a letter from the MPs who want another vote, and if he gets that he will hold a party meeting tomorrow.

He said if Peter Dutton proves he has the numbers, he will step down.

"In terms of my own intentions, when the party room meeting is called, I will invite a spill motion to be moved. If the motion is carried, I will treat that as a vote of no confidence and I will not stand as a candidate in the ballot," he said.

"The reality is that a minority in the party room supported by others outside the Parliament have sought to bully, intimidate others into making this change of leadership that they're seeking.

"Its been described by many people, including those who feel they cannot resist it as a form of madness and it is remarkable we're at this point where only a month ago we were being, as you all know being avid readers of polls, just little bit behind Labor and in our own polls a little bit ahead, but in any view thoroughly competitive," Mr Turnbull said.

Mr Dutton, who until this week was home affairs minister, had on Tuesday unsuccessfully challenged Mr Turnbull in a Liberal party vote - losing by a slim 13-vote margin.

He resigned his cabinet position as a result.

Australian media is also reporting that Julie Bishop will make a bid for the prime minister role.

The prime minister has not commented publicly on the latest developments but is due to speak to the press shortly.

He has now lost the support of three key ministerial backers, seen as a blow to his chances of remaining leader.