Mr Peters is on his way to Canberra where he will meet with his Australian counter-part, Julie Bishop, who is also the deputy leader of the Liberal Party.

However, he said it would be "churlish" of him to mention the vote that took place this morning.

The best New Zealand could hope for was "stability on the Australian political scene", he said.

He said what were looking to be "slightly iffy trans-Tasman meetings" are now back on "solid ground''.

Mr Dutton has been in charge of Australia's immigration policy that has resulted in hundreds of New Zealanders living in Australia being deported back has been a source of tension between the two countries home.

Prime Minister Jacinda Ardern said the resignation would not have any impact on the issues the government continues to raise across the ditch.

She said it was about maintaining good and strong relationships with Australia regardless of what was going on domestically.

Mr Turnbull forced his rival to show his hand by declaring all leadership positions vacant as soon as the party room meeting started this morning.

Mr Turnbull won the vote and his deputy Julie Bishop was the only candidate for her role.

But the result is so narrow it is set to create ongoing problems for the government.

Mr Dutton has now resigned from his Home Affairs portfolio, creating a big gap in Cabinet that Mr Turnbull will have to fill.

However the ABC understands that despite Mr Dutton challenging him for the leadership, Mr Turnbull later offered his rival the chance to stay on.

Some Liberals also expect other frontbenchers to quit the ministry, which would cause a major reshuffle.

Mr Turnbull's risky move may have backfired as it exposes the weakness of his position and the size of the split between the two factions of the Liberal Party. 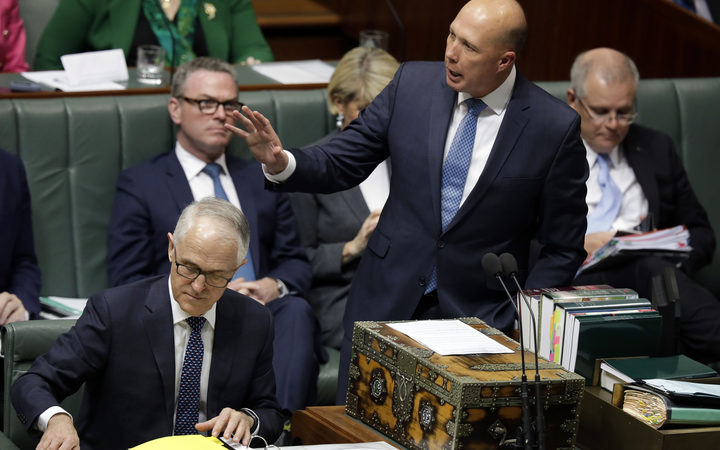 Peter Dutton and Prime Minister Malcolm Turnbull faced off in a vote for the Liberal Party leadership today. Photo: AFP

The vote this morning confirms Mr Dutton has the backing of a significant group in the party room - mostly conservatives - to replace Mr Turnbull as PM.

The leadership instability continues a pattern in Australian federal politics covering nearly a decade, that began with the Labor government replacing Kevin Rudd with Julia Gillard in 2010.

The meeting was a "spill over" after last week's party meeting got taken up by an ACCC briefing.

Three quarters of Liberal MPs supported the policy at a meeting last week.

However, those who didn't support it threatened to "cross the floor" - that is, vote against it in Parliament.

Mr Turnbull has been forced to change his energy policy - formulated and agreed to just last week - to head off the threat of his own colleagues voting against the policy in Parliament.

Former prime minister Tony Abbott - the man knocked off in a leadership challenge by Mr Turnbull - has been the most vocal critic of the energy policy.

Peter Dutton is a senior conservative voice in the government who was identified as the major leadership rival to Mr Turnbull.

Australia's election is set to be held in the middle of next year.