A woman has been pulled alive from a collapsed building on Indonesia's tourist island of Lombok, two days after a powerful earthquake killed dozens. 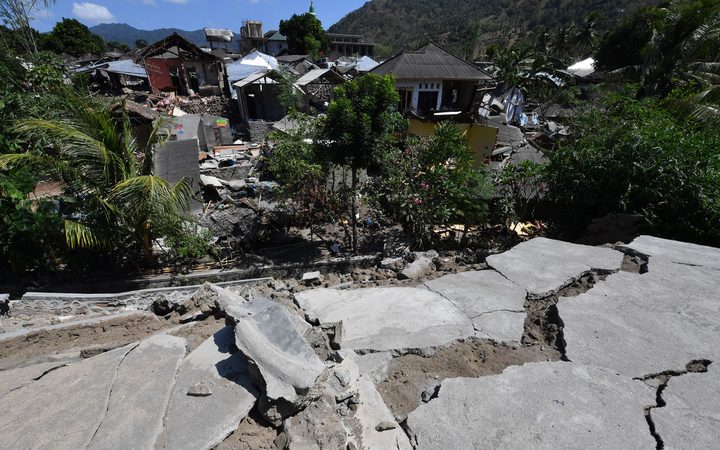 Rescue workers were also digging under the rubble of a mosque in the north of the island shattered by Sunday's 6.9 magnitude earthquake, hopeful that at least one of four people trapped inside was still alive.

Nadia Revanale, 23, was shopping in a minimart in Pemenang at the time of the tremor, the second major quake to rock the island in a week. Neighbours heard cries for help from the mangled concrete and alerted rescuers, who took four hours to extract her.

"First we used our hands to clear the debris, then hammers, chisels and machines to slowly remove the pieces," Marcos Eric, a volunteer rescue worker from a mining company, told Reuters after an ambulance had taken the woman away.

"It took many hours but we're thankful it worked and this person was found alive."

It was a rare moment of joy since the earthquake struck, killing at least 98 people, including two on the neighbouring island of Bali to the west.

Lombok had already been hit by a 6.4 earthquake on 29 July that killed 17 people and briefly stranded several hundred trekkers on the slopes of a volcano.

Quakes continued to rattle the island, including a 5.5 magnitude tremor at around 2 am local time, Indonesia's meteorology and geophysics agency said (BMKG). More than 230 aftershocks were recorded by Tuesday morning, BMKG data showed.

Indonesia sits on the Pacific Ring of Fire and is regularly hit by earthquakes. In 2004, the Indian Ocean tsunami killed 226,000 people in 13 countries, including more than 120,000 in Indonesia.

Thousands of tourists have left Lombok since Sunday evening, fearing further earthquakes, some on extra flights that were laid on by airlines and some on ferries to Bali.

Officials said more than 2000 people had been evacuated from the three Gili islands off the northwest coast of Lombok, where fears of a tsunami spread soon after the quake. 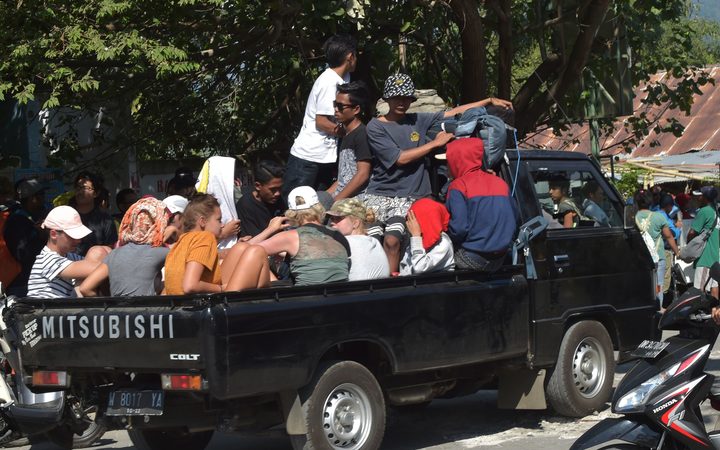 Foreign tourist and local residents ride on the back of a vehicle in Bangsal, North Lombok Photo: AFP

Indonesian Search and Rescue Agency (Basarnas) said on Twitter it had rescued more than 3000 people from the Gilis by Monday evening and many more were yet to be evacuated.

"Thousands more, tourists and hotel workers, are still in the process of being evacuated out of the three island," the disaster mitigation agency (BNPB) said in a statement on Monday evening.

Saffron Amis, a British student on Gili Trawangan - the largest of the islands that are fringed by white beaches and surrounded by turquoise sea - said there were at least 200 people stranded there and others were still arriving from the other two, Gili Air and Gili Meno.

"We still have no WiFi and very little power. Gili Air has run out of food and water so they have come to us," she told Reuters in a text, then messaging later that she had been taken on a boat to the main island and would head from there to Bali.

In the north of Lombok, the earthquake's epicentre, rescuers were holding out hope that more people would be pulled alive from the wreckage of thousands of buildings that collapsed.

Early in the morning they heard a weak voice coming from under the pile of bricks and mangled steel bars of a two-storey mosque in Pemenang, where four people were believed to have been trapped.

"We are looking for access. We have a machine that can drill or cut through concrete so we may use that. We are waiting for heavier equipment," Basarnas official Teddy Aditya told Reuters.

The BNPB said more than 20,000 people had been displaced by the quake as it brought down or damaged some 13,000 houses, and many of those were living in open areas in need of food, medicine and other aid.

Riduan, a 45-year-old man whose house was partially destroyed, said he had received no assistance and had bought food himself. "We don't get anything," he said as he tried to retrieve documents from the remains of his home.

Aid agency Oxfam said it was providing clean drinking water and tarpaulin shelters to 5000 survivors, but the need was much greater.

"Thousands ... are under open skies in need of drinking water, food, medical supplies, and clothes," it said in a statement.

"Clean drinking water is scarce due to the extremely dry weather conditions leading up the disaster."