A New Zealander living on the island of Lombok says the quake that has hit Indonesia was much worse than one earlier in the week. 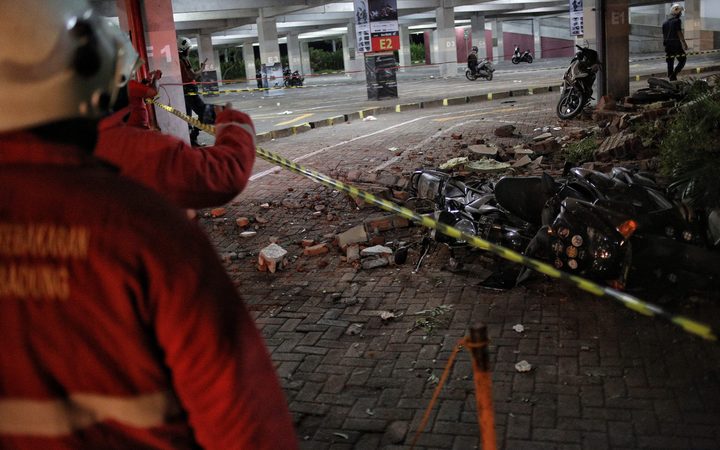 The powerful earthquake rocked Indonesia's Lombok in the early hours of 6 August, sending people running from their homes and triggering a brief tsunami alert. Photo: AFP

The 6.9 earthquake that hit the resort island overnight has left at least 91 people dead.

The National Disaster Mitigation Agency (BNPB) said the death toll was expected to rise as information comes in from areas where thousands of buildings collapsed or were badly damaged, especially in the north, the quake's epicentre.

Some 10,000 people have been evacuated from Lombok and boats have been sent to evacuate more than 1000 tourists from the nearby Gili islands.

Power and communications were cut in some areas of Lombok, and the military said it was sending in a vessel with medical aid, supplies and logistical support for the island.

The quake came just over a week after a 6.4 magnitude quake on 29 July killed 17 people, injured hundreds and briefly stranded several hundred trekkers on the slopes of a volcano.

New Zealander Rosalie Dobson lives in Kuta on the island's southern coast and said the quake was intense.

"We had violent shaking like I never felt here, [it was] much worse than last week's earthquake," she said.

"We went outside and there were waves on the pool, it was quite a juggery, violent, shaking one this time."

She said she froze when she realised what was happening.

"All the things that you've learnt about what to do in an earthquake but you kind of half freeze," she said.

"It took us a few seconds to figure it out but we managed to grab some clothing each, and when it wasn't so violent we went outside where we thought we'd be safer."

Ms Dobson said she was extremely lucky that her house has escaped unscathed, but the same could not be said for her housekeeper's.

"She's about an hour from here and her family house has been ruined ... totally wrecked," she said.

'A lot of people were crying'

Another New Zealander, Eve Palmer, was on the island of Bali next to Lombok and said she was in the shower at her hotel, about 40 minutes from Ubud, when the quake struck.

She managed to clothe herself and get safely outside where there were a lot of frightened people.

"It was a couple of hours outside with everyone on the hotel, a lot of people were crying and upset because there [are many] who have never felt earthquakes," she said.

"There was one family from Belgium who were in Lombok a week ago for the first earthquake and had come here to ... get away from it and then were terrified again."

Ms Palmer said a lot of tourists were scrambling to get out of the country.

There are now 15 New Zealanders registered as being on Lombok with more than 550 registered in Indonesia.

BNPB spokesman Nugroho said via Twitter about 1000 foreign and domestic tourists were evacuated in boats from the three Gili islands off the northwest coast of Lombok.

No tourists died on the Gilis, he said.

The Indonesian Agency for Meteorology, Climatology and Geophysics said that more than 120 aftershocks were recorded after Sunday evening's quake, whose magnitude the US Geological Survey revised down to 6.9 from an original 7.0.

There were no foreigners among the dead and the number of injured stood at 209, BNPB spokesman Sutopo Purwo Nugroho said.

The Ministry of Foreign Affairs and Trade said the New Zealand Embassy in Indonesia had been activated to provide consular assistance to New Zealanders affected by the earthquake.

But it said it had not received any information to suggest any had been affected by this incident yet.

The ministry said the Indonesian government had not requested any assistance from the international community at this stage.