Two of Mother Nature's most potentially devastating forces - a major hurricane and an erupting volcano - appear headed for a close encounter on Hawaii's Big Island next week, according to weather forecasters. 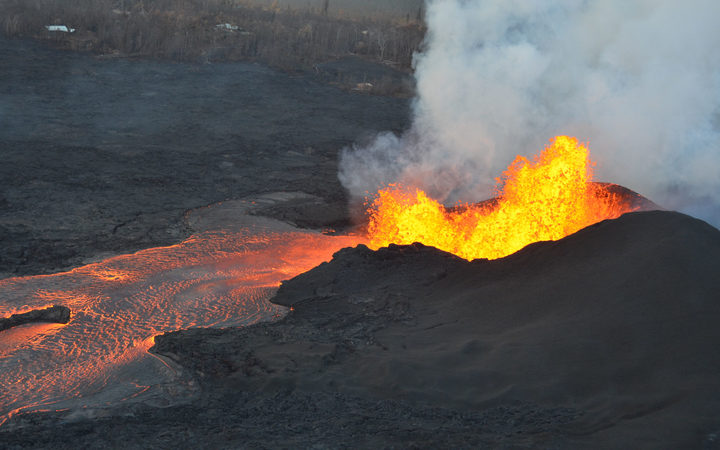 This image obtained June 5, 2018, from the US Geological Survey (USGS) shows an aerial view of lava fountains continuing at fissure 8 Photo: AFP

Hurricane Hector, swirling harmlessly in the Pacific some 1700 miles (2,760 km) east of the Big Island, was expected to grow into a "major hurricane" on Saturday, meaning that its maximum sustained winds would reach at least 111 miles per hour (179 km per hour).

Storms of that strength, classified as a Category 3 on the Saffir-Simpson hurricane wind scale, are considered capable of causing devastating damage to populated areas.

The US National Hurricane Center said Hector, classified as a Category 2 on Friday with winds of up to 105 mph (169 kph), was on a trajectory that could brush the southern coast of the Big Island late on Wednesday morning.

That would put the storm on a virtual collision course with Kilauea Volcano, situated on the southern portion of the island. The volcano is in the midst of a 3-month-old eruption of lava from vents on its eastern flank while its summit crater continues to collapse.

Lava spewed from Kilauea since 3 May has covered 13.4 square miles (34.7 sq km) of the island's surface, destroying more than 700 homes and displacing thousands of residents.

Scientists differ over how hurricanes and volcanoes might interact, including the question of whether low atmospheric pressure from a major cyclone could help trigger an eruption, and much remains unknown on the subject.

The current Kilauea lava flow, emanating from just one of about two dozen volcanic fissures that opened in the ground, has been going on for 93 days straight, marking the longest nonstop eruption on record from Kilauea's lower East Rift zone.

That surpassed eruptions from the lower zone of several weeks and 88 days recorded in 1840 and 1955, respectively, according to Janet Babb, a geologist with the US Geological Survey. But an eruption from another vent on Kilauea's middle East Rift Zone continued with little interruption for 35 years.