Greece's prime minister told of the "unspeakable tragedy" the country faced after at least 74 people were killed by wildfires that swept through a resort, trapping people in cars and on the edge of cliffs as others were forced to jump off to survive. 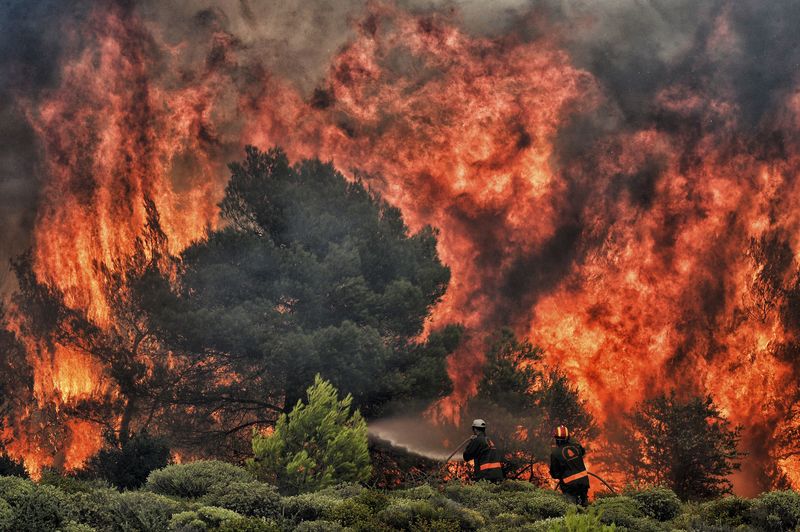 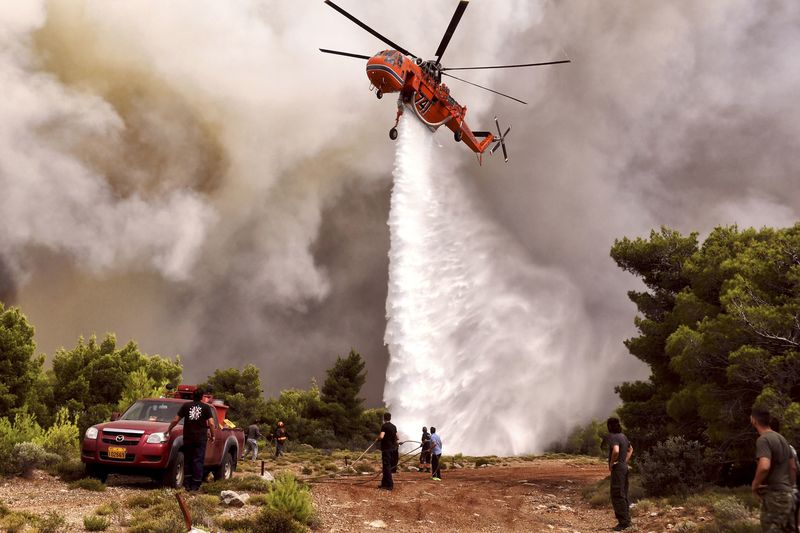 A firefighting helicopter drops water to extinguish flames near Athens. 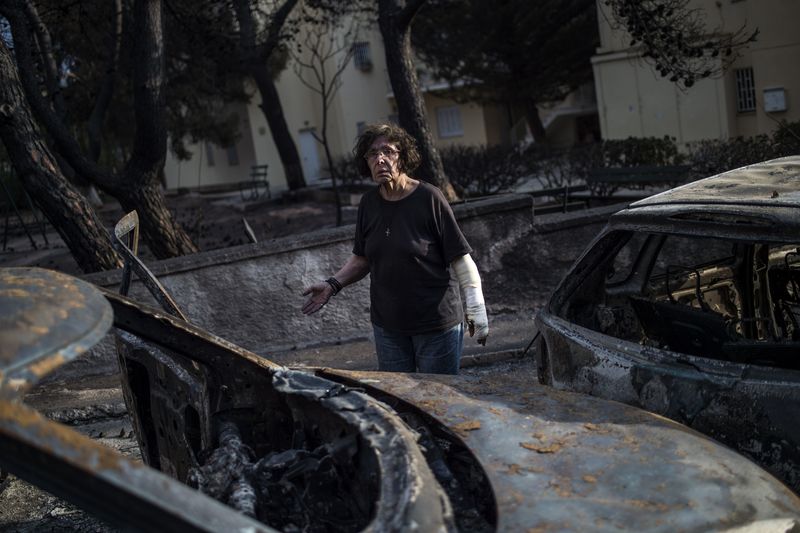 A woman with a cast stands among cars burnt following a wildfire at the village of Mati, where rescuers found the bodies of 26 people in a courtyard of a villa. 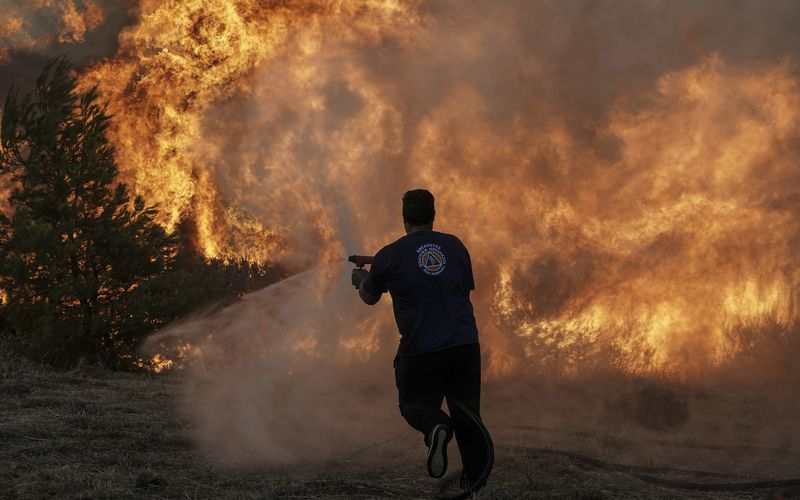 The wildfire in Penteli, near Athens. 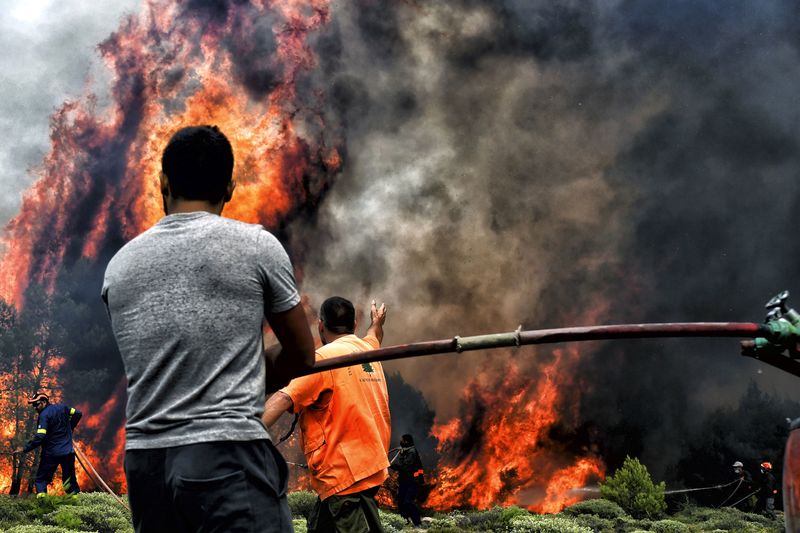 Firefighters and volunteers try to extinguish flames during a wildfire at the village of Kineta. 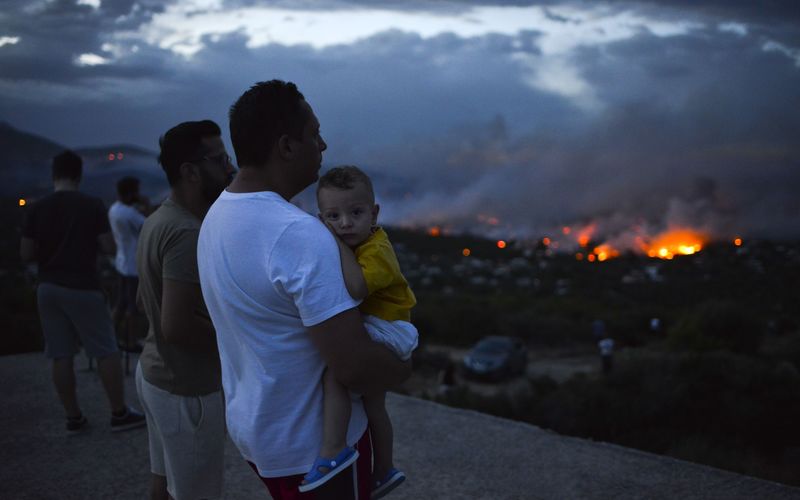 A man holds his son as a wildfire burns in the town of Rafina, near Athens. 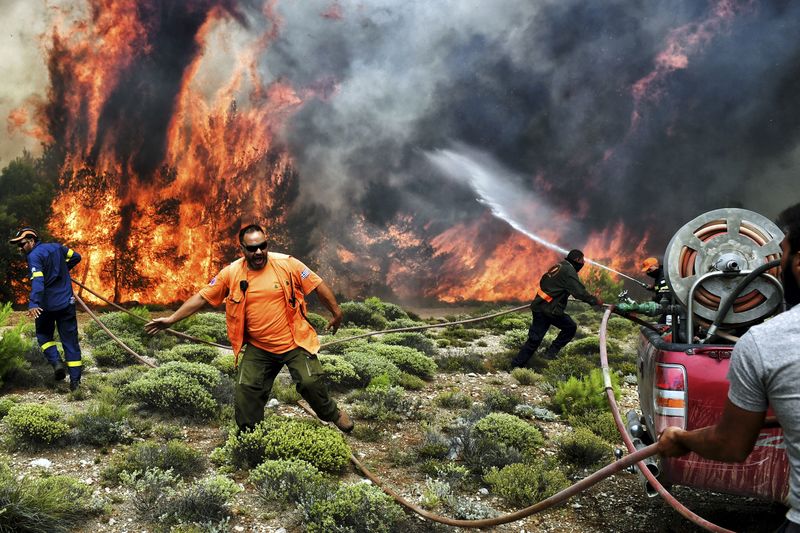 Terrified residents fled to the sea to escape the flames. 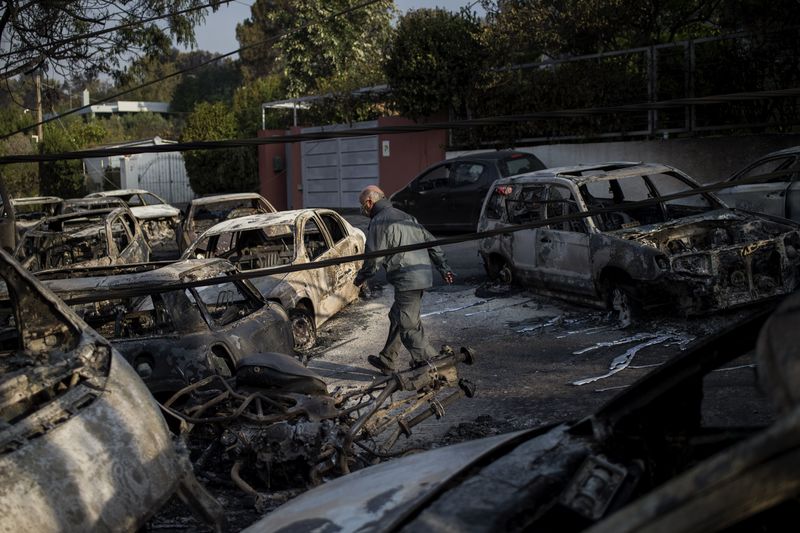 A man walks among burnt cars following a wildfire at the village of Mati, near Athens. 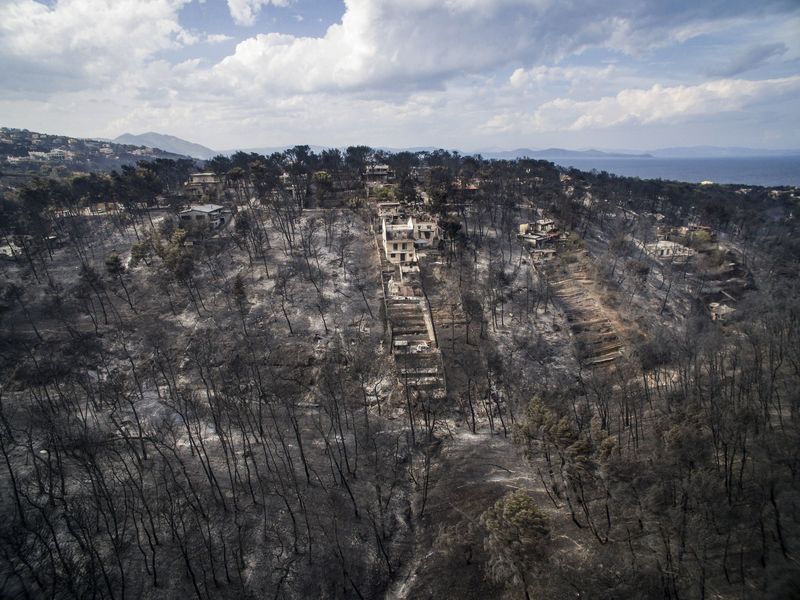 An aerial view shows damage caused by a wildfire near the village of Mati, near Athens. 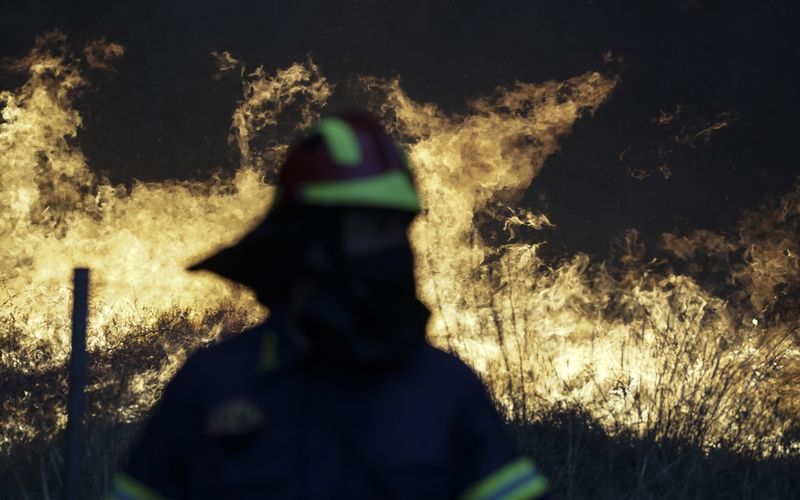 A firefighter at the scene of the wildfire in Penteli, near Athens. 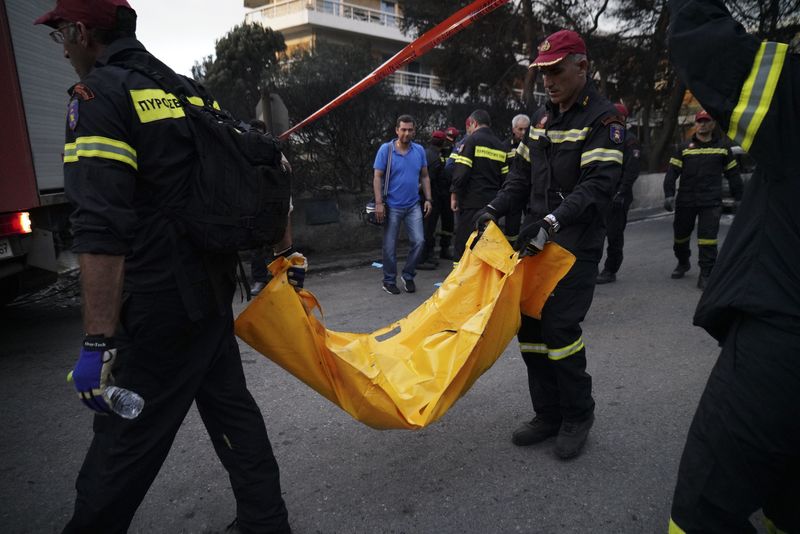 Firefighters carry a dead person following a wildfire at the village of Mati. 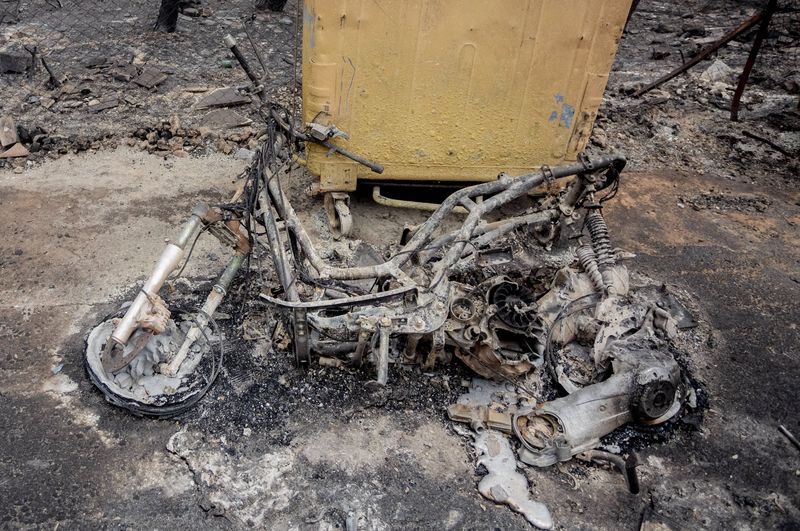 A burned motorcycle stands on the streetof a village near Athens.

The scale of devastation in Mati became apparent at first light the following morning after it started.

Scores of gutted cars lined streets in the coastal town, east of Athens, melted by the intensity of the heat. Bodies lay on roadsides, and in one area, a group of 26 people were found dead - some locked in an embrace as the flames closed in.

The group, which included children, were found near the top of a cliff overlooking a beach. They had ended up there after apparently searching for an escape route.

The lucky ones were able to leap off the cliffs to survive, or rush into the sea from the beach.

"We went into the sea because the flames were chasing us all the way to the water. It burned our backs and we dived into the water," Mr Kostas Laganos, a middle-aged survivor, said.

He compared the ordeal to the destruction of the city of Pompeii, where thousands were incinerated by the volcano of Mount Vesuvius in 79 AD. "I said 'my God, we must run to save ourselves and nothing else'."

At least 74 people were killed, a fire brigade spokeswoman said, and the death toll was expected to rise. Poland said two of its citizens, a mother and her son, were among the victims.

It was not clear how many people remained unaccounted for as boats combed beaches for any remaining survivors.

Residents, their faces blackened by smoke, wandered the streets, some searching for their burned-out cars, others for their pets.

The eerie silence was punctured by fire-fighting helicopters and the murmur of rescue crews. There were yellow body bags in several areas.

Many in the area had been unable to escape the fast pace of the blaze even though they were a few meters from the Aegean Sea or in their homes, the fire service said.

A Reuters photographer saw at least four dead people on a narrow road clogged with cars heading to a beach.

One of the youngest victims was believed to be a six-month-old baby who died of smoke inhalation. At least 187 people were injured, officials said, among those 23 children.

"Greece is going through an unspeakable tragedy," Prime Minister Alexis Tsipras said as he appeared on television to declare three days of national mourning.

"Greece is living one of its most difficult moments," he said. "There are absolutely no words to describe how we feel right now."

Flags atop the ancient Acropolis hill and parliament flew at half mast.

The inferno was thought to be Greece's deadliest, with the death toll higher than fires which ravaged the southern Peloponnese peninsula over several days in August 2007, killing dozens.

The fire had been contained, but the risk remained of it reigniting in scrubland parched by Greece's searing summer heat.

Wildfires are not uncommon in Greece, and a relatively dry winter and hot summer helped create the current tinder-box conditions.

The cause of the current blaze was not immediately clear and an Athens prosecutor ordered an investigation into it.

Mati is a popular spot for Greek holiday-makers, particularly pensioners and children at summer camps.

Greece's fire service said the intensity and spread of the wildfire had slowed as winds died down, but it was still not fully under control.

It urged residents to report missing relatives and friends. Some took to Twitter and Facebook, posting photographs of young children and elderly couples they hoped to track down.

Greece issued an urgent appeal for help to tackle fires that raged out of control in several places across the country, destroying homes and disrupting major transport links.

"Our thoughts go to Greece and the victims of the terrible fires," French President Emmanuel Macron said in tweets published in French and Greek.

Pope Francis said in a telegram he was deeply saddened by the tragedy and prayed for the victims and their families.