Barack Obama has used his first high-profile speech since stepping down as US President to say the world should resist cynicism over the rise of strongmen, in an apparent reference to populist leaders who hold power in a number of countries. 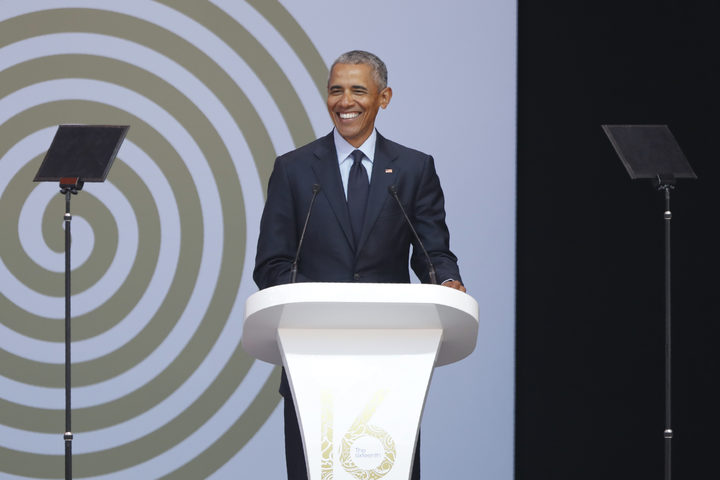 The Democratic former US president did not name his Republican successor, Donald Trump, but the speech was among the most pointed comments he has made about politics since leaving office in January 2017.

"Just as people spoke about the triumph of democracy in the 90s, people now are talking about the triumph of tribalism and the strong man. But we need to resist that cynicism," Obama said in a speech in Johannesburg to mark the 100th anniversary of the birth of Nelson Mandela.

Some of Mr Obama's language echoed that of Trump's critics.

"Too much of politics today seems to reject the very concept of objective truth. People just make stuff up. We see it in the growth of state-sponsored propaganda, we see it in internet-driven fabrications, in the blurring of lines between news and entertainment," Mr Obama said.

"We see the utter loss of shame among political leaders, where they are caught in a lie and they just double down and they lie some more," he said.

His comments are seen as thinly veiled criticism of the current US administration's use of what has been described as "alternative facts".

"You have to believe in facts," said Mr Obama, "without facts there is no basis for co-operation.

Mr Obama said there were far-right parties in the West that had platforms of protectionism and closed borders but also a "barely hidden racial nationalism".

Warning against creeping populism and "strongman politics", he made the case for liberal democracy, saying that he believed it offered the better future for humanity.

Democracy is messy, he said, "but the efficiency of an autocrat is a false promise".

"It is time for us to stop paying all of our attention to the world's capitals ... and focus on the world's grassroots. That is where democracy comes from," he added.

Since leaving the White House, Mr Obama has largely avoided direct involvement in US politics and has refrained from criticising Mr Trump. Some Democrats say he should play a more direct role.

On Monday, Mr Trump sided with Russian President Vladimir Putin over [alleged Russian meddling in the 2016 US presidential election, casting doubt on the findings of his own US intelligence agencies and sparking storm of criticism at home.

During his speech, given in a stadium to thousands of politicians, businesspeople and students, Mr Obama lauded Nelson Mandela's life of sacrifice and commitment to social justice.