US President Donald Trump has urged Nato allies to commit 4 percent of their annual output (GDP) to military spending - double the current target. 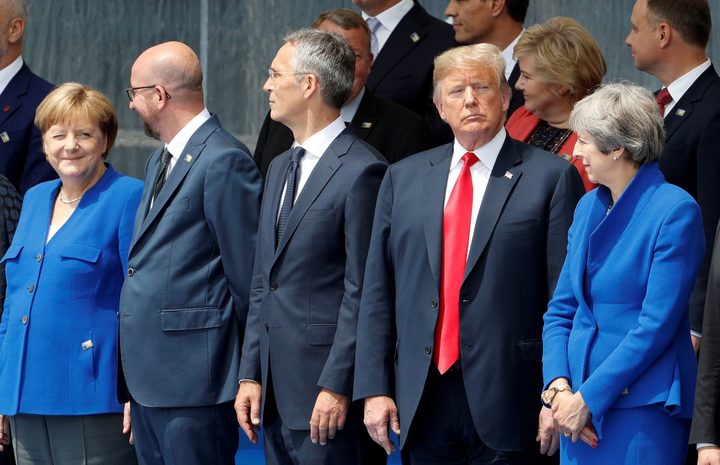 The White House confirmed he had made the remarks during the Western military alliance's summit in Brussels.

The meeting also saw Mr Trump single out Germany for criticism over its defence spending.

Nato Secretary-General Jens Stoltenberg said the main focus should be on all members reaching the current target of 2 percent of GDP.

Mr Stoltenberg declined to answer a specific question about Mr Trump's remarks, but told reporters: "I think we should first get to 2 percent, focus on that now... the good thing is that we are moving to that."

For decades after the end of the Cold War, he said, Nato countries had cut defence budgets as tensions fell - and now needed to increase them at a time when tensions were rising.

Previous US presidents have urged Europe to take more responsibility for their defence and reduce the burden on US taxpayers of maintaining forces in Europe long after the end of the Cold War - but none as bluntly as Mr Trump.

The Brussels meeting comes less than a week before Mr Trump is due to hold his first summit with Vladimir Putin, in Helsinki, reviving concerns among US allies over his proximity to the Russian president.

Mr Trump's main objection is that all but a handful of member states have still not increased their defence budgets to meet a goal of spending at least 2% of their annual economic output on defence by 2024.

Of Nato's 29 members, just five meet that target this year: the US, Greece, Estonia, the UK and Latvia.

However, several, such as Poland and France, are close to the mark.

At a news conference after the first meetings of leaders at the summit, Mr Stoltenberg insisted that more united Nato than divided it.

"We have had discussions, we do have disagreements, but most importantly we have decisions that are pushing this alliance forward and making us stronger."

All 29 Nato members released a declaration which reaffirmed a commitment to increase military spending.

The communique also condemned "Russian aggression", including the annexation of Crimea, the use of a nerve agent in southern England and "election interference".

What did Trump say about Germany?

Mr Trump clashed with Mrs Merkel ahead of the summit.

The US president accused Germany of only spending "a little bit over 1 percent" of its economic output on defence compared to the 4.2 percent spent by the US "in actual numbers".

Germany spends 1.24% of GDP on defence and the US 3.5%, according to the latest Nato estimate.

The US leader also said: "Germany is totally controlled by Russia because they will be getting from 60% to 70% of their energy from Russia, and a new pipeline, and you tell me if that's appropriate because I think it's not and I think it's a very bad thing for Nato."

EU figures suggest Russia is responsible for between 50% and 75% of Germany's gas imports, but gas makes up less than 20% of Germany's energy mix for power production.

Mr Trump made more conciliatory remarks on Wednesday after he and Mrs Merkel met on the sidelines of the Brussels summit, saying defence spending and trade had been discussed.

But he later repeated his criticism of Germany and other allies in a tweet:

What good is NATO if Germany is paying Russia billions of dollars for gas and energy? Why are there only 5 out of 29 countries that have met their commitment? The U.S. is paying for Europe’s protection, then loses billions on Trade. Must pay 2% of GDP IMMEDIATELY, not by 2025.

Mrs Merkel has responded by comparing German independence now with the time when she grew up in the former East Germany, a satellite of the then Soviet Union.

Mrs Merkel told reporters: "I am very happy that today we are united in freedom as the Federal Republic of Germany. Because of that we can say that we can make our independent policies and make independent decisions."