Hundreds of lawsuits against giant agrichemical manufacturer Monsanto Co by cancer survivors or families of those who died can proceed to trial, a federal judge has ruled. 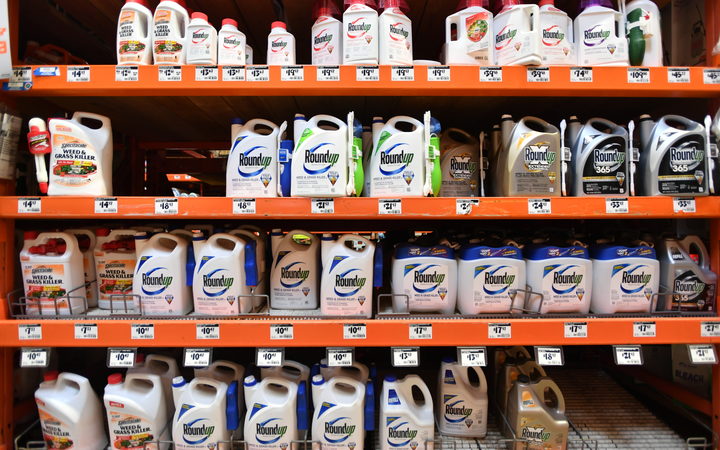 The decision by followed years of litigation and weeks of hearings surrounding the safety of the chemical glyphosate, the key ingredient in Monsanto's top-selling weed-killer. Photo: AFP

The judge found there was sufficient evidence for a jury to hear the cases that blame the company's glyphosate-containing weed-killer for the disease.

The decision by US District Judge Vince Chhabria in San Francisco followed years of litigation and weeks of hearings about the controversial science surrounding the safety of the chemical glyphosate, the key ingredient in Monsanto's top-selling weed-killer.

Monsanto is now a unit of Bayer AG following a $US62.5 billion ($NZ91.7b) takeover of the US seed major which closed in June.

The US Environmental Protection Agency last September concluded glyphosate is likely not carcinogenic to humans.

However, the World Health Organisation in 2015 classified glyphosate as "probably carcinogenic to humans."

However, he said a reasonable jury could conclude, based on the findings of four experts he allowed, that glyphosate can cause cancer in humans.

The plaintiffs will next have to prove Roundup caused cancer in specific people whose cases will be selected for test trials, a phase the judge called a "daunting challenge".

Lawsuits by more than 400 farmers, landscapers and consumers who claim Roundup caused them to develop non-Hodgkin's Lymphoma, a type of blood cell cancer, have been consolidated before the judge.

Monsanto denies the allegations and in a statement said it would continue to defend the lawsuits with evidence proving there is "absolutely no connection between glyphosate and cancer."

The company said its position was supported by more than 800 scientific studies and reviews.

The company had told the judge in March that none of the plaintiffs' experts satisfied scientific or legal requirements for admissibility and urged him to dismiss the cases.

Aimee Wagstaff, one of the lawyers representing the people suing the company, in a statement said she was pleased her clients will have their day in court.

"It's time to hold Monsanto accountable for putting this dangerous product on the market," Ms Wagstaff said.

While the judge's ruling is not binding on them, state court judges have been closely following the federal litigation and expert hearings.

The California state judge who handles the most Roundup cases posted to her docket that she was attending the hearings before Mr Chhabria in March.