US astronaut Buzz Aldrin is suing two of his children and his former business manager alleging they stole money from him and are slandering his legacy. 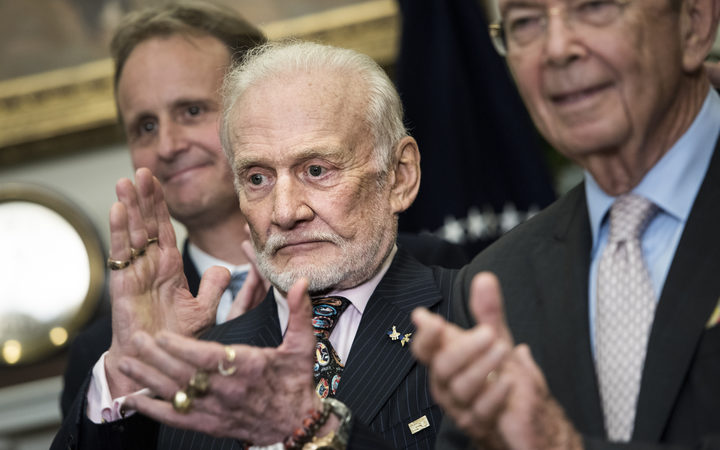 Buzz Aldrin at the White House where US President Donald Trump spoke about an executive order to reinstate the National Space Council on 30 June 2017. Photo: AFP

The lawsuit was filed in a Florida court one week after his children petitioned to take control of his finances.

His family members had told a judge that he required a legal guardian because he was in "cognitive decline".

The 88-year-old was the second man to ever walk on the surface of the Moon.

In a Wall Street Journal interview last week, the former US Air Force colonel said: "Nobody is going to come close to thinking I should be under a guardianship."

In his lawsuit, he claims that his son, daughter and former manager Christina Korp also undermined his "personal romantic relationships" by forbidding him from getting married.

At issue is the management of his private company, Buzz Aldrin Enterprises, and his non-profit organisation, the ShareSpace Foundation.

In a legal filing earlier this month, his children Andrew Aldrin, 60, and Janice Aldrin, 60, contended that their father had recently begun associating with new friends who were trying to alienate him from his family.

CFal, Thanks for understanding that sometimes life gets tricky https://t.co/0bIIpVLlfy

They also said he has been spending money at "an alarming rate".

Mr Aldrin's lawsuit claims that his son and Ms Korp had improperly taken control of his finances - including millions of dollars worth of "space memorabilia" and "space artifacts".

The lawsuit adds that they did so "for their own self-dealing and enrichment".

The legal action also claims the pair had been slandering him for years by claiming he suffers from dementia and has Alzheimer's disease.

He accuses his son of exploiting the elderly by "knowingly and through deception or intimidation" depriving him of his property, and his daughter of fraud and of not acting in his financial interest.

His eldest son is not involved in the lawsuit.

In a statement, his children say they are saddened by the "unjustifiable" lawsuit.

"If nothing else, our family is resilient and our ability to work together to solve problems and accomplish great things is strong," the Aldrin children said.

"We love and respect our father very much and remain hopeful that we can rise above this situation and recover the strong relationship that built this foundation in the first place."

Mr Aldrin was part of the Apollo 11 crew, which in 1969 became the first mission to successfully land two humans on the Moon.

In recent years, he has become a strong advocate for human habitation of Mars.

Last week, he appeared at a National Space Council event at the White House, where US President Donald Trump announced the formation of a Space Force to serve as a sixth branch of the US military.