Saudi women are officially allowed to get behind the wheel, after a decades-old driving ban was lifted. 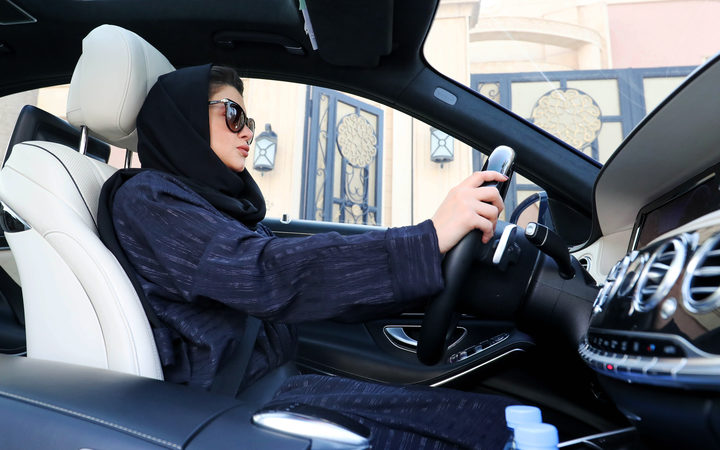 A Saudi woman practices driving in Riyadh in April, ahead of ban being lifted on women driving in Saudi Arabia. Photo: AFP

The change was announced last September and Saudi Arabia issued the first licences to women earlier this month.

It was the only country left in the world where women could not drive and families had to hire private chauffeurs for female relatives.

However, the move comes amid an intensified crackdown on activists who campaigned for the right to drive.

At least eight women's rights activists are being detained and could face trial in a counter-terrorism court and long prison sentences for their activism, human rights group Amnesty says.

They include Loujain al-Hathloul, a well-known figure in the campaign for women's driving rights.

Human rights groups in the kingdom have campaigned for years to allow women to drive.

Dozens of women were arrested for driving in Riyadh in 1990 and some Saudi women began posting videos of themselves at the wheel in 2008, and between 2011 and 2014.

Thousands of women could soon take to the roads.

"It is a historic moment for every Saudi woman," Saudi television presenter Sabika al-Dosari told the AFP news agency

She said she was behind the wheel minutes after the end of the driving ban at midnight local time.

On 5 June, 10 women became the first female licence-holders after swapping their foreign licences for Saudi ones in cities across the country.

The Saudi authorities previously said they expected about 2,000 women to have received licences by the time the ban was lifted.

However some Saudi men have expressed their dissatisfaction with the change, using an Arabic hashtag on social media that translates as "You won't drive".

The lifting of the driving ban is part of Crown Prince Mohammed bin Salman's programme to modernise some aspects of Saudi society.

He has spearheaded the Vision 2030 programme to diversify the economy away from oil and open up Saudi society.

But there are still limits on what Saudi women can do.

Saudi law enforces a strict form of Sunni Islam known as Wahhabism and is known for its gender segregation rules.

Women have to adhere to strict dress codes, and must not associate with unrelated men. If they want to travel, work or access healthcare, they must be accompanied by a male guardian or have their written permission.