US President Donald Trump has defended his policy of splitting up families entering the US illegally, defying a growing chorus of condemnation. 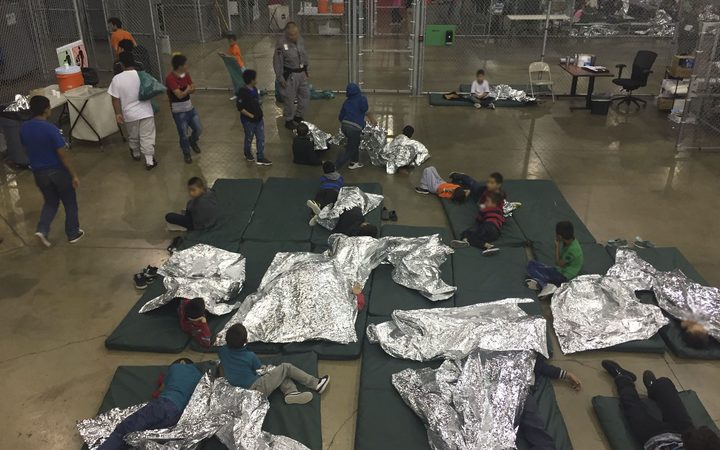 Speaking at a business convention, Mr Trump said children have to be taken away if their parents are jailed for illegally crossing the US border.

The president had earlier sparked outrage for tweeting that undocumented immigrants would "infest" the US.

Mexico's foreign minister has called the US policy "cruel and inhuman".

"I don't want children taken away from parents," Mr Trump said on Tuesday during a speech at a National Federation of Independent Businesses event in Washington DC.

But he added: "When you prosecute the parents for coming in illegally - which should happen - you have to take the children away."

Seven minutes of audio from inside a detention center last week.

Ten Central American children separated from their parents. A distraught but determined six-year-old Salvadoran girl pleads repeatedly for someone to call her aunt.https://t.co/rVlBqBkM99 pic.twitter.com/iAWLhyiOzJ

He also claimed that separating families was "the only solution" to end illegal immigration, even as he noted that he does not support the practice.

US immigration officials say 2,342 children have been separated from 2,206 parents from 5 May to 9 June.

Mr Trump has blamed "Democrat-supported loopholes" in federal law for the family separations, but critics of the policy say the recent spike is due to the enforcement of US Attorney General Jeff Sessions' "zero tolerance" approach.

Democrats are the problem. They don’t care about crime and want illegal immigrants, no matter how bad they may be, to pour into and infest our Country, like MS-13. They can’t win on their terrible policies, so they view them as potential voters!

Mr Sessions has rejected claims US holding centres for child migrants separated from parents are like Nazi concentration camps.

Mr Trump is meeting Republican lawmakers later to discuss a bill that proposes to curb the policy.

Mr Sessions was asked on Fox News about a tweet by former CIA Director Michael Hayden likening what happened at Auschwitz concentration camp, where millions of Jews and other minorities were killed, to the separation of undocumented immigrant families at the US border.

"Well, it's a real exaggeration, of course," the Department of Justice chief said in Monday night's interview.

"In Nazi Germany, they were keeping the Jews from leaving the country."

Mr Sessions said: "Fundamentally, we are enforcing the law. Hopefully people will get the message and not break across the border unlawfully."

It is not the first historical analogy inspired by the policy - former US First Lady Laura Bush has compared it to the internment of Japanese-Americans during the Second World War.

Mr Trump tweeted on Tuesday that immigrants threatened "to pour into and infest our Country", triggering further outrage.

Democrats staged an impromptu congressional protest and moderate Republicans and key US business groups pressed Mr Trump to stop separating immigrant children from their parents as an opinion poll showed most Americans oppose the policy.

The family separations and detentions of children at the southern US border, highlighted by the videos of youngsters in cages and an audiotape of wailing children, have sparked an outcry at home and strong condemnation abroad.

Two of the top US business groups, the US Chamber of Commerce and the Business Roundtable, decried the separation policy on Tuesday and called for its immediate cessation.

"This practice is cruel and contrary to American values," the group's chair, Chuck Robbins, said. 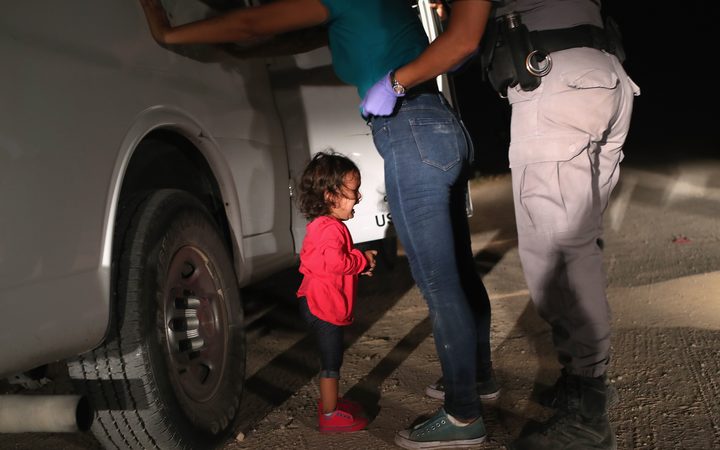 A two-year-old Honduran asylum seeker cries as her mother is searched and detained near the US-Mexico border on June 12, 2018 in McAllen, Texas. Photo: AFP

The separations have been blasted by Democrats, some Republicans, medical professionals, rights activists and clergy.

They began after Attorney-General Jeff Sessions announced in April that all immigrants apprehended while crossing the US-Mexico border illegally should be criminally prosecuted.

Parents who are referred by border agents for prosecution are held in federal jails, while their children are moved into border shelter facilities under the custody of the Office of Refugee Resettlement, a Department of Health and Human Services agency.

A Reuters/Ipsos national opinion poll released on Tuesday showed fewer than one in three American adults support the policy. The 16-19 June poll found that 28 percent of people polled supported the policy, while 57 percent opposed it and the remaining 15 percent said they do not know.

The images that have sparked widespread condemnation, of children in wire cages, are of a border patrol processing center in McAllen, Texas.

Three Republican senators - Ron Johnson, Ted Cruz and John Kennedy - called on Trump on Tuesday to allow families to stay together if they have crossed the border illegally, while lawmakers pursue legislation on wider immigration reform.

Mr Cruz, who ran against Mr Trump in the 2016 Republican presidential primaries, plans to introduce a bill this week that would prohibit the separations along with other reforms.

"What I would do until we pass Ted's bill is to continue to arrest and prosecute people for breaking the law, but allow their children to stay with them," Mr Kennedy said at a news conference with Johnson and Cruz.

Mr Trump planned to meet with Republican lawmakers later on Tuesday before votes expected this week on immigration legislation. He is focused on winning congressional funding for a wall he has long wanted to build along the US's southern border with Mexico, and Democrats have long said they will resist that.

One House bill would limit, but not fully prohibit family separations, fund Trump's wall and give legal protections to young adults, known as "Dreamers," who were brought to the country as children when their parents entered the country illegally. Details were still in flux.

The bill is opposed by Democrats, who object to another provision that would cut legal immigration levels, and by conservative Republicans who are backing a rival bill that takes a harder line on immigration.

In the Senate, Mr Cruz said his bill would build temporary shelters where immigrant families could stay together in cases where there was no threat to the children's safety, double the number of federal immigration judges and speed handling of asylum applications.

Decrying "internment camps," Democrats and their supporters disrupted a high-profile US congressional hearing about an FBI probe on Tuesday.

With the sound of a young child crying in the background, the top Democrat on the House of Representatives Judiciary Committee, Jerrold Nadler, broke from traditional protocol and started reading from a statement, saying "these (migrant) children are not animals." His Republican colleagues tried to shout over him "Out of order!"

On Tuesday, the attorneys-general of 21 states called on Mr Sessions in a letter to stop endangering children by separating them from their families.

In the latest condemnation from abroad, the UN refugee agency has told Washington it is very concerned over the family separations, UN High Commissioner for Refugees Filippo Grandi told Reuters.