Several hundred Central American migrants have gathered on the US-Mexican border in an attempt to enter the United States to claim asylum. 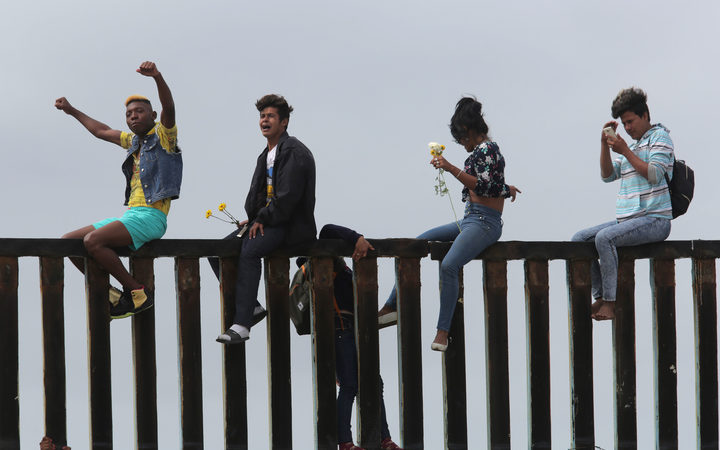 Pro-migrant caravan demonstrators rally on the Mexican side of the border wall on April 29, 2018 in San Diego, California. Photo: AFP

However, the quest was put on pause after Border Patrol authorities declared that they were unable to process them due to space constraints.

The so-called migrant 'caravan', made up of people from Guatemala, Honduras and El Salvador, has spent several weeks traveling to the Mexican border city of Tijuana.

Border Protection Commissioner Kevin McAleenan said in a statement that they had reached capacity "at the San Ysidro port of entry for CBP officers to be able to bring additional persons traveling without appropriate entry documentation into the port of entry for processing".

Once space opened up and "resources become available" officers would be able to begin processing people, he said.

Alex Mensing, an organiser for Pueblo Sin Fronteras, told the ABC that caravan members were told up to 20 people could wait next to the door for processing to begin.

He said 20 people will be camped outside, rotating in shifts, until everyone is processed.

"We've got blankets, we've got people bringing clothing and food from the community... The police have set up kind of a ring of fencing around it.

"Everyone is out here, organising a security commission, and everything they need to be able to spend the night."

The news that they would not be processed immediately was met with frustration and anger among the caravan's members.

One rejected migrant blamed the US government for failing "to get sufficient agents and resources" to process the refugees.

"The United States government is the most powerful government on the planet," the migrant said.

"One of the most richest governments on the planet. We can build a base in Iraq in under a week, [yet] we can't process 200 refugees? I don't believe it."

Before it was announced that San Ysidro was at capacity, a lawyer representing a caravan migrant told ABC News that approximately 150 to 180 people would present at the official port of entry and seek asylum today.

Most were children, Nicole Ramos said.

"The majority of those that will be presenting are children coming with their families.

The border at San Ysidro has for weeks been built up as a flashpoint where the caravan of emigrants hoped to make the 15-minute walk over the pedestrian bridge and gain entry into the US.

But it was unknown if border authorities would welcome them with open arms or turn them away.

The nearly 400 migrants - many mothers carrying infants children who filled five old school buses and at one point numbered over 1000 strong slogging from as far as Guatemala - arrived in Tijuana last week.

Some secured pro bono legal counsel and have been staying in shelters in Tijuana near the US border in San Diego.

The vast majority of emigrants that make up the "caravan" come from violence-ravaged Honduras.

A large caravan arrived in Tijuana within the last week and had waited until Sunday to cross the border into San Diego.

Supporters on both sides of the border held celebrations and demonstrations.

Attention on their flight and plight has reached a fever pitch, with US president Donald Trump painting the caravan as a direct threat to the US.

During a Saturday night rally in Washington, Michigan, Trump railed against the "caravan" as proof that the country's laws were too relaxed.

"Are you watching that mess that's going on right now with the 'caravan' coming up?" he asked the crowd.

Already this month, Trump called for more manpower to be deployed by the National Guard in Arizona, New Mexico and California to secure the border.

He said Saturday that it was clear that for too long immigration laws were "so weak" and the country's borders too porous.

"We don't have borders," he said. "We're going to build the wall. We're getting it. We have already started."