US President Donald Trump says he has committed no wrongdoing but has the "absolute" power to pardon himself, echoing sweeping arguments from his lawyer. 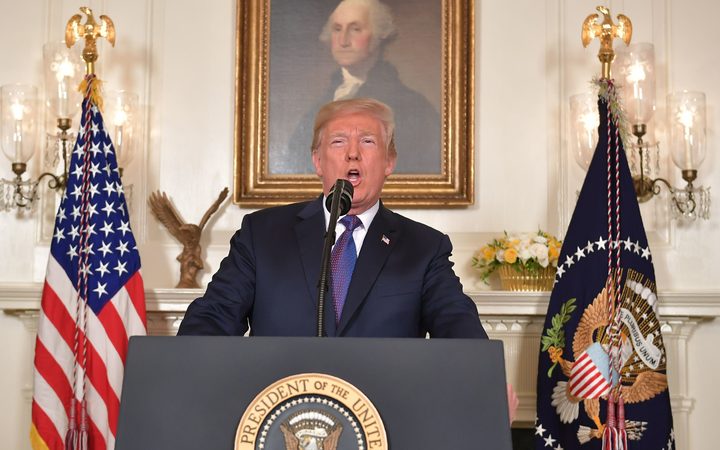 US President Donald Trump tweeted that he cannot be indicted or subpoenaed and has the power to pardon himself. Photo: AFP or licensors

The remarks come as US Special Counsel Robert Mueller's investigation into alleged Russian meddling in the 2016 US election and possible illegal obstruction of that probe by the president has entered its second year.

Mr Trump's lawyer Rudy Giuliani said the president cannot be indicted or subpoenaed and has the power to pardon himself, leaving impeachment by the US Congress likely the remedy for presidential misconduct.

"The constitution gave the president the right to pardon himself," Mr Giuliani said, adding that Trump would not need to because "he didn't do anything wrong."

Trump said the same thing on Twitter on Monday: "As has been stated by numerous legal scholars, I have the absolute right to PARDON myself, but why would I do that when I have done nothing wrong?"

As has been stated by numerous legal scholars, I have the absolute right to PARDON myself, but why would I do that when I have done nothing wrong? In the meantime, the never ending Witch Hunt, led by 13 very Angry and Conflicted Democrats (& others) continues into the mid-terms!

The appointment of the Special Counsel is totally UNCONSTITUTIONAL! Despite that, we play the game because I, unlike the Democrats, have done nothing wrong!

In another tweet he called Mr Mueller's appointment "totally UNCONSTITUTIONAL".

Mr Trump has denied he colluded with Russians or obstructed justice and repeated in tweets on Monday his frequent claim that the Mueller investigation is a "witch hunt."

Russia has denied US intelligence agencies' assessment that Moscow sought to interfere with the 2016 US election to boost Mr Trump's prospects of becoming president.

The Constitution is silent on the issue of whether the president's broad power to grant pardons extends to himself, and some lawyers say that supports Trump's position.

But many legal experts disagree. Andrew Wright, a former associate counsel in the Obama White House, said allowing the president to pardon himself would be contrary to fundamental principles of the American legal system.

"One of the basic rules is that no man is a judge in his own case," Prof Wright said.

"You can't pardon yourself," Democratic US Representative Ted Deutch said on Twitter. "Let me remind you of something, we don't live in a monarchy and you are not a king."

House Majority Leader Kevin McCarthy said on CNN on Sunday that he did not think a president should pardon himself.

Mr Giuliani told Reuters on Sunday that a move by Mr Trump to pardon himself would likely trigger political blowback leading to his impeachment.

The comments by Mr Trump and his lawyer follow a report by the New York Times on Saturday of a confidential memo sent to Mr Mueller in January. In that memo, Mr Trump's lawyers argued the president could not have obstructed the investigation because, as the nation's chief law enforcement officer, he already has the power to terminate it.

Many legal experts say the president's actions could be considered obstruction if prosecutors can show he acted with "corrupt intent."

Mr Mueller, who was appointed by Deputy Attorney General Rod Rosenstein in the wake of the May 2017 firing of FBI director James Comey, has so far secured five guilty pleas. Among those who have pleaded guilty are former Trump national security adviser Michael Flynn and Rick Gates, a longtime business partner of Paul Manafort, the former Trump campaign chairman who has been indicted in the investigation.

The 20-page memo to Mr Mueller came in response to repeated requests by the special counsel's office asking to interview Mr Trump, according to the Times.

The memo asserted Mr Mueller could not subpoena Mr Trump to testify because it would interfere with "the president's prime function as the chief executive" and demean "the office of the president before the world."

"We couldn't have a better example than North Korea," said Mr Giuliani. "Mueller is punching around with this ridiculous investigation and we've got nuclear nightmare possibilities or nuclear peace with North Korea."

Mr Trump already has raised questions about his use of the presidential pardon power.

Last week he pardoned Dinesh D'Souza, a conservative pundit convicted of campaign finance crimes, and last year he pardoned former Arizona sheriff Joe Arpaio, who campaigned for Trump before being convicted in a case regarding racial profiling.