Hurricane Maria killed more than 4600 people in Puerto Rico, 70 times the official toll, according to estimates in a Harvard University study. 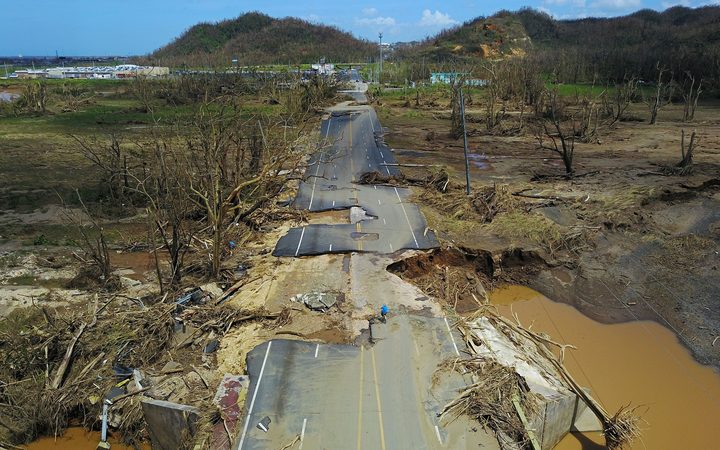 A man rides his bicycle through a damaged road in Toa Alta, west of San Juan, Puerto Rico, on September 24, 2017 following the passage of Hurricane Maria. Photo: AFP

A third of deaths after September's hurricane were due to interruptions in medical care caused by power cuts and broken road links, researchers say.

The Puerto Rico government said it "always expected the number to be higher than what was previously reported".

The official death toll stands at 64.

But experts say an accurate count was complicated by the widespread devastation wreaked by the storm.

"The magnitude of this tragic disaster caused by Hurricane Maria resulted in many fatalities," he said.

He said the island's authorities had also commissioned George Washington University to study the number of deaths and these findings would be released soon.

"Both studies will help us better prepare for future natural disasters and prevent lives from being lost," he said.

The Harvard researchers said interviews conducted in Puerto Rico suggested a 60 percent increase in mortality in the three months after the storm.

They contacted more than 3000 randomly selected households between January and March this year and asked about displacement, infrastructure loss and causes of death.

They then compared their results with the official mortality rates for the same period in 2016, more than a year before the hurricane struck the island.

The researchers said that interrupted medical care was the "primary cause of sustained high mortality rates in the months after the hurricane".

Disruption to health care was a "growing contributor to both morbidity and mortality" in natural disasters, they said, because growing numbers of patients had chronic diseases and used sophisticated equipment that relied on electricity.

Hurricane Maria caused the largest blackout in US history, according to research consultancy the Rhodium Group.

There have also been repeated power cuts since then, including an island-wide one in April, nearly seven months after the hurricane.

Overall, Hurricane Maria caused losses of $US90 billion, the US National Oceanic and Atmospheric Administration said.

The Caribbean island is home to 3.4 million US citizens.