The suspect in a deadly knife attack in central Paris today was born in 1997 in the Russian republic of Chechnya, a judicial source says. 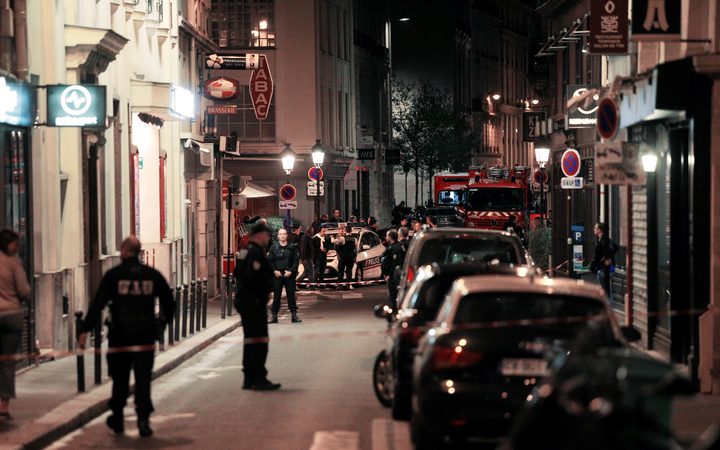 Policemen stand guard in Paris after one person was killed and several injured. Photo: AFP or licensors

The attacker killed a 29-year-old man and wounded four other people in the busy Opéra district before being shot dead by police.

So-called Islamic State (IS) later said one of its "soldiers" had carried out the attack.

French President Emmanuel Macron tweeted (in French): "France has once again paid in blood, but will not give an inch to the enemies of freedom."

What do we know about the attacker?

Security forces have identified him, although he was not carrying any identification papers and has not been officially named.

The judicial source told French media the suspect had no criminal record and that his parents had been held for questioning. He is believed to be a French national.

Another source said the suspect had been categorised as "fiche S", which in France is a list of people who may represent a threat to national security.

This would be the first time an assailant of Chechen origin has carried out a terrorist attack in France.

France is home to some 30,000 people of Chechen origin.

Interior Minister Gérard Collomb said the man who died was a 29-year-old passer-by, but gave no further details.

How did the events unfold?

The attacker began stabbing passers-by at about 21:00 local time.

Eyewitnesses described him as a young man with brown hair and a beard, dressed in black tracksuit trousers.

The man tried to enter several bars and restaurants but was blocked by people inside. Police arrived at the scene within minutes.

They first tried to stop the assailant with a stun-gun before shooting him dead.

An eyewitness, named as Gloria, told AFP news agency: "We didn't know what was going on, we were quickly moved inside the bar, I went outside and I saw a man lying on the floor."

Jonathan, a waiter at a local restaurant, told AFP: "I saw him with a knife in his hand. He looked crazy."

He said a woman the attacker had stabbed ran into into the restaurant bleeding. The assailant tried to follow her inside, but was fended off and finally fled.

Two of the wounded in the attack are in a serious condition but do not have life-threatening injuries.

Later in the evening the IS group said it was behind the attack, in a brief statement posted on its news outlet.

How did French authorities react?

The anti-terrorism unit of the Paris prosecutor's office has launched an investigation.

Prime Minister Edouard Philippe said police were on the scene five minutes after an emergency call and the assailant was killed within nine minutes of beginning the attack.

Mr Collomb praised police for their "cool response". He said his first thoughts were "with the victims of this heinous act".

France has been on high alert following a series of attacks. More than 230 people have been killed by IS-inspired jihadists in the past three years.

Defeating IS in Iraq and Syria must go hand-in-hand with anti-terror measures in Africa, he said.