This comes after Mr Najib said that he and his wife were planning to go on an overseas holiday on Saturday. 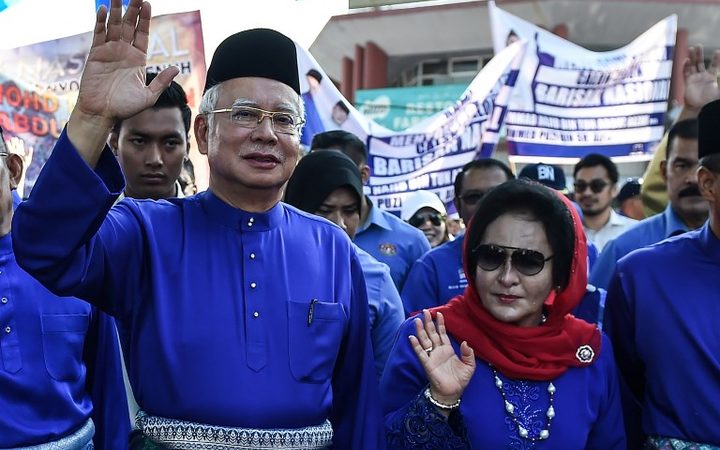 Najib Razak and his wife Rosmah Mansor had planned to go on an overseas holiday. Photo: AFP

Mr Najib has been accused of diverting $US700 million from a state investment fund in 2015, but has since been cleared by the authorities.

On Thursday, Mahathir Mohamad was sworn in as Malaysia's new prime minister, becoming the world's oldest elected leader at 92.

Dr Mahathir came out of retirement and defected to the opposition to take on and beat former protege Najib Razak.

How has Mr Najib reacted to the ban?

In a tweet (in Malay), he said he had been informed by the immigration authorities that he and his family would not be allowed to travel abroad.

He gave no reasons for the authorities' decision, but said he would abide by it.

Mr Najib, 64, had said earlier that he and his wife Rosmah Mansor would go on a holiday on Saturday and would return next week.

What about the corruption scandal?

He had faced accusations of corruption and mismanagement over the state investment fund 1Malaysia Development Berhad (1MDB).

The scandal has gripped the country for years.

1MDB, set up by Mr Najib in 2009, was meant to turn Kuala Lumpur into a financial hub and boost the economy through strategic investments.

But it started to attract negative attention in early 2015 after it missed payments for some of the $11bn it owed to banks and bondholders.

Then the Wall Street Journal (WSJ) reported it had seen a paper trail that allegedly traced close to $700m from the fund to Mr Najib's personal bank accounts.

Mr Najib has consistently denied taking money from 1MDB or any public funds.

After being sworn in as new prime minister, Dr Mahathir said he would seek the return of millions of dollars lost in the scandal.